10 Prettiest Streets in Europe to Stroll in Your Holidays 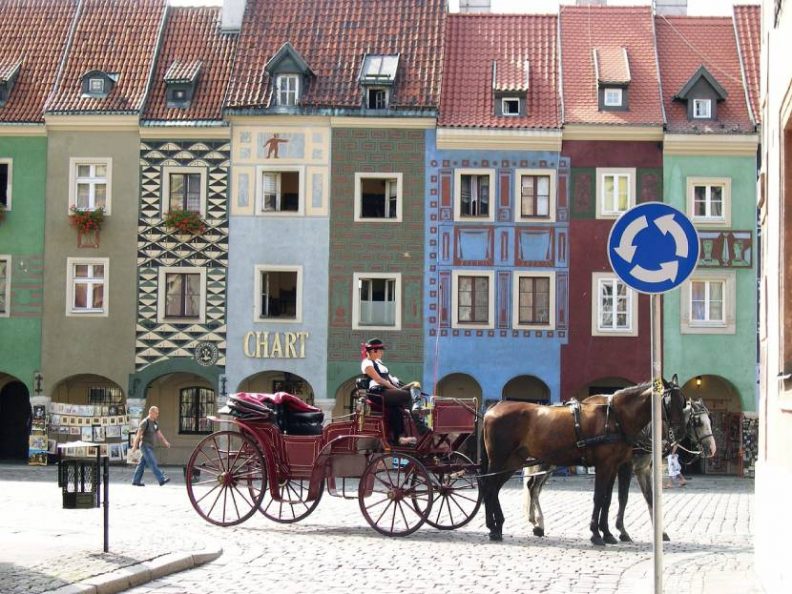 Finding really nice Instagram-worthy spots often requires exploring a lot of streets. There are many hidden (or not so hidden) gems around European cities, with beautiful colourful houses and great sights or street art. Keep reading and find out about 10 prettiest streets in Europe. Also, get our Cultural Places App and add these spots into your personal trip planner, so you can easily find them later.

Paris is one of the most beautiful cities in the world, and of course, its most adorable street had to make it on our list. Rue Crémieux is a beautiful pastel candy coloured street located near the hustle and bustle of the railway station Gare de Lyon, Bastille and Pont d’Austerlitz in the 12th Arrondissement. It’s a beautiful residential cobblestoned street, lined with an extraordinary collection of small, colourful houses and terracotta flower pots. Photoshooting done in this street is obligatory, it’s just irresistible.

The Old Market Square of Poznan is lined with former merchants’ houses painted in vibrant colours and decorated, each in a unique way. This Old Market Square is set in the centre of Poznan’s Old Town and dates back to the 13th century. Most of the buildings were destroyed in WWII but carefully restored later. You will love wandering around the square and will surely take a bunch of photos, later you can take a break in one of the many cafes set in those amazing houses. Don’t forget to check out the Historical Museum of Poznan, while you’re at the Square. 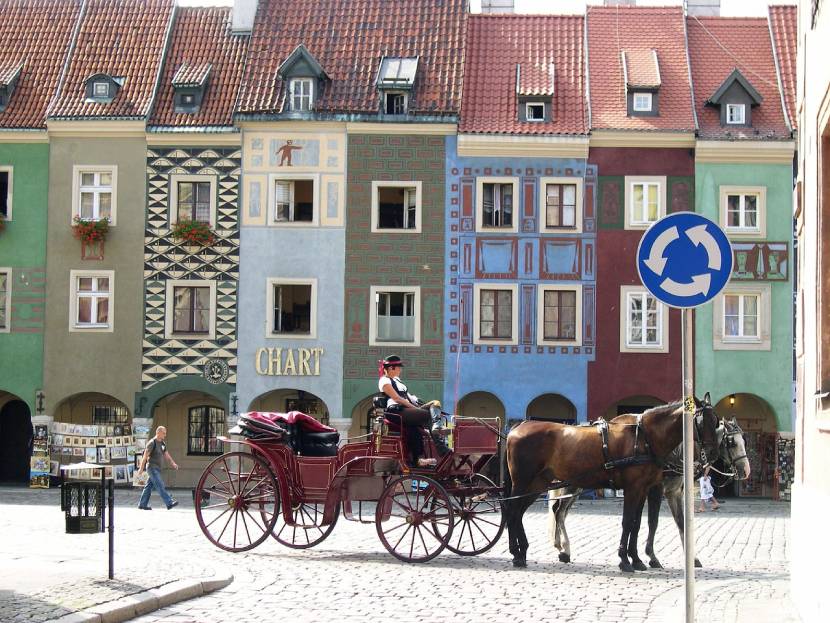 Lisbon’s most photographed street, Rua da Bica de Duarte Belo is located in the historic neighbourhood of Bica and is known for two things, first – it is so beautiful with its colourful houses, and second – it has its own funicular railway that is making it easier to get from one point to another, because it is very steep. This is a gorgeous cobblestoned street, lined with steps instead of regular pavement and amazing balconies filled with flower pots. The yellow funicular is going up and down and being the most photographed thing in Lisbon since 1892. 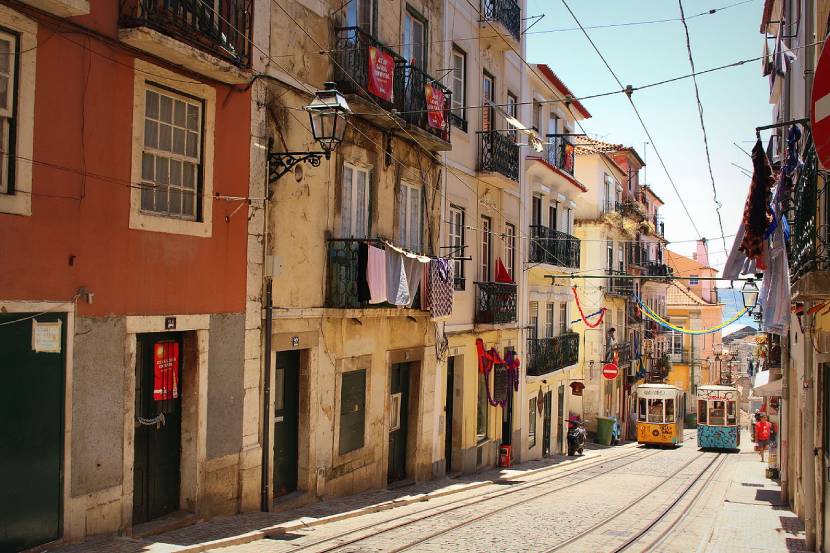 Nyhavn is the harbour in Copenhagen, with colourful street lining it both sides and cool wooden ships. Most of those buildings date back to the 17th century, and today they are serving as cute cafes and restaurants. This is one of the most iconic places in Copenhagen, even Hans Christian Andersen, the famous Danish fairy-tale writer, lived here, on numbers 20, 67 and 18. Nyhavn is the perfect place to end a long walk around the city, to sit in one of its cafes and watch the sunset. 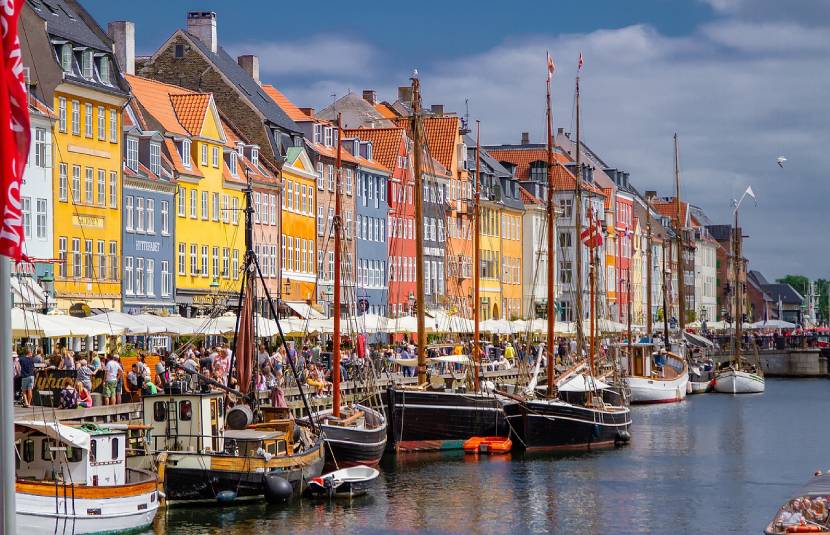 As the name itself says, Calleja de las Flores (The Lane of Flowers) is a small lane dominated by the flower pots. It’s actually a small cobbled passageway lined with the countless number of rustic flower pots filled with geranium and carnations giving the colour to the white walls that you’ll see there. It also has a great view over the Mezquita Cathedral, so if you stand at the beginning of the alley, you can make an excellent photo. 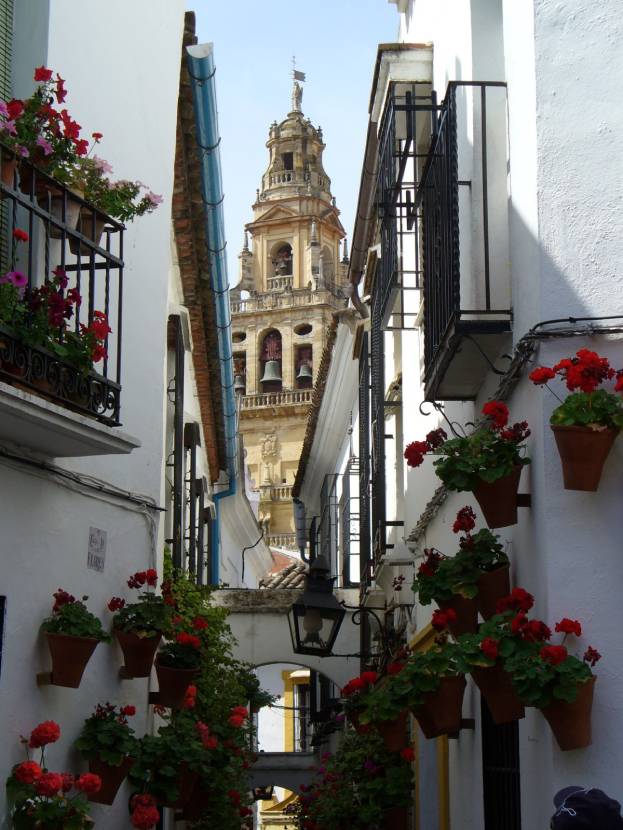 Victoria Street is an old street in Edinburgh, built between 1829 and 1834, by a famous architect Thomas Hamilton who built most of Edinburgh’s neo-classical wonders. The street was first named the Bow Street until the moment Queen Victoria took the throne. Victoria Street is a wide, steep, cobblestoned street lined with vibrant buildings, shops, arches, and an amazing terrace above it that is the perfect spot for taking photos. This amazing street was an inspiration for the Diagon Alley from the Harry Potter books, and once you see it you will understand why. 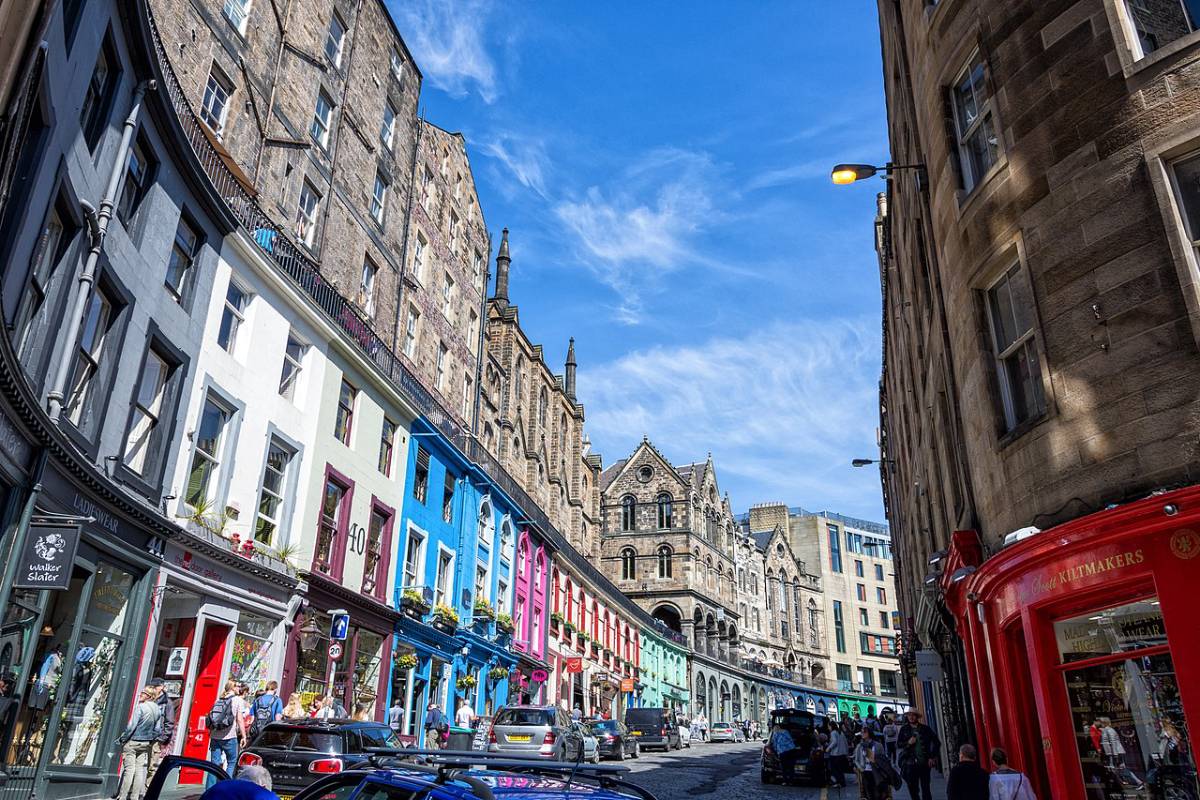 We couldn’t decide on only one street on this amazing Greek island, so we figured why not write about all of its gorgeous streets. Narrow streets of Mykonos are lined with white-washed walls, with a splash of blue and pink here and there, hidden small local shops and tavernas. All those little alleys lead to the amazing view of the blue sea and small boats floating around. Sunset by the sea in Mykonos are magical and perfect for relaxing after a long day of wandering through its maze-like cobbled alleys. 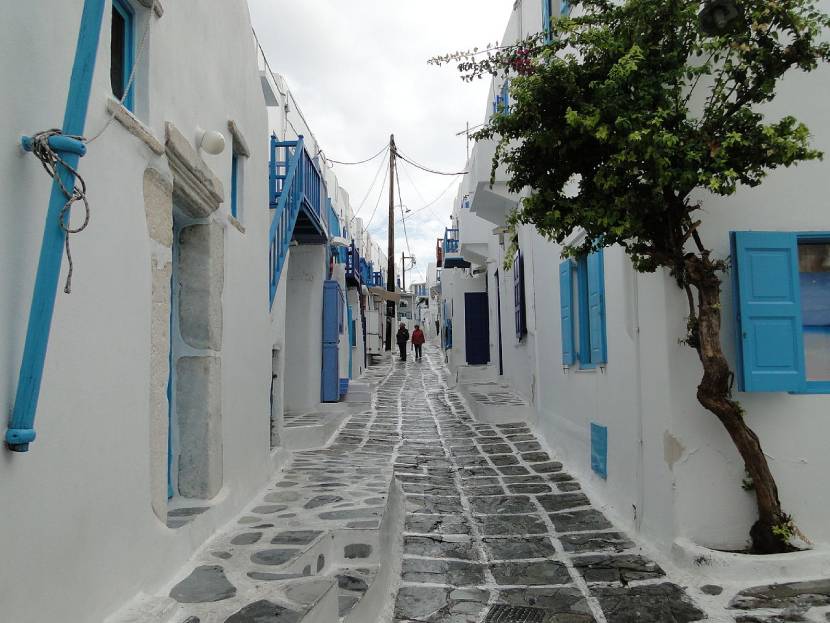 East Side Gallery in Berlin, Germany

If you’re into street art, you’ll love the East Side Gallery in Berlin. After the fall of the Berlin Wall, many of the artists immortalized themselves on the wall with a unique art piece, never seen before, making the East Side Gallery, the longest open-air gallery in the world. More than 100 unique artworks can be seen alongside one kilometre long, still intact original section of the Berlin Wall! 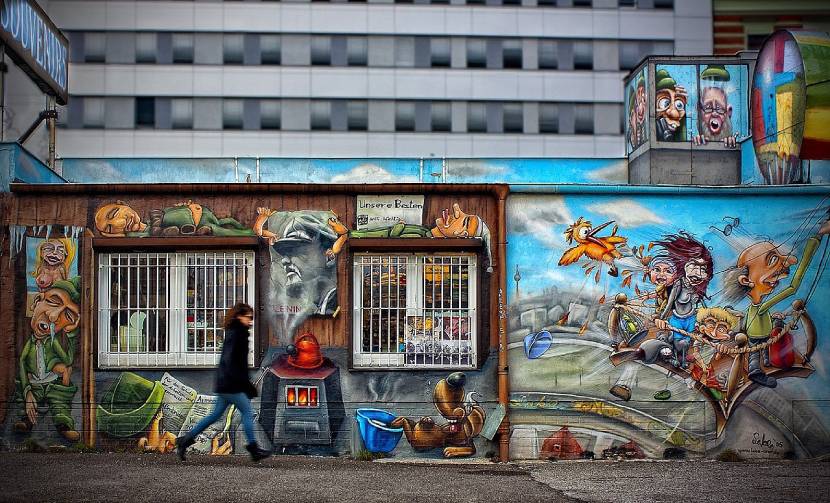 Burano Island in Venice and its colourful fisherman’s village is a stunning place, and even though it’s not a street, we had to mention it. Burano’s canals are lined with houses in rainbow colours, and it looks incredible and is very Instagrammable. The colour scheme is very strict, and you cannot paint your house before getting permission for the colour you want – that may be the reason this place looks so harmonic. Take a walk (or a boat-ride) and enjoy this rainbow-coloured place. 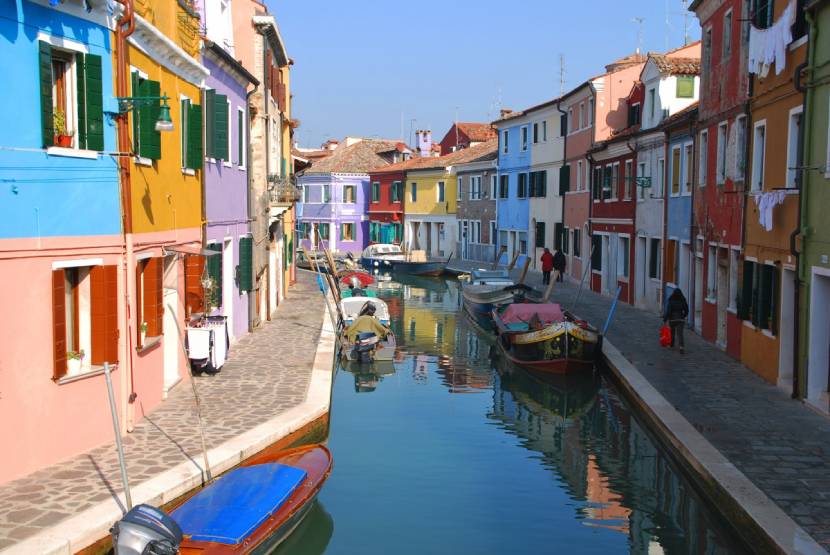 Golden lane in Prague, in the castle walls, is one small but really stunning street. It’s another one with very colourful, over 500 years old houses, that are as much of an attraction as the Prague Castle itself. These houses were homes to the residents back in the days, and today they house numerous exhibitions and little shops. You’ll have to pay the ticket to explore this street, but it’s totally worth it. 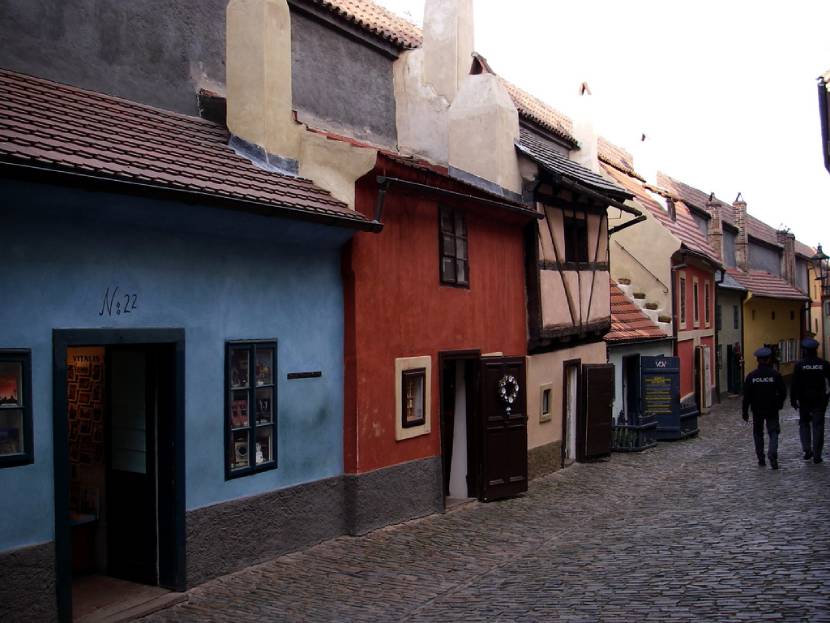 Stumbling upon these streets really brightened up our travels. While strolling towards these picturesque streets, keep your eyes wide open for many other Instagram-worthy spots, and let us know about your favourite ones. 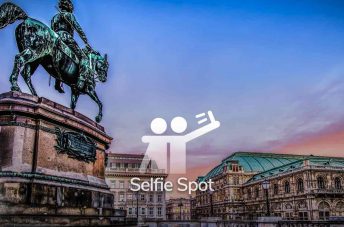 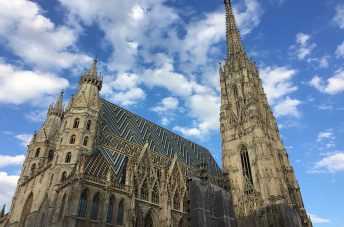