5 Most Interesting Medieval Castles in Europe 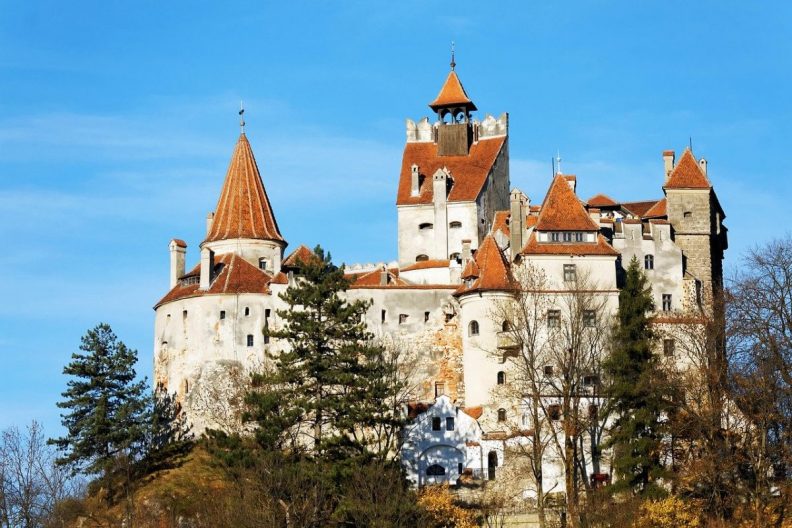 Europe is an old continent, and it’s full of different architectural monuments, of many styles. Some of the most interesting buildings are surely its medieval castles. Some of them are mystical, some are scary, but one thing is sure — they are all beautiful. Making a list of the best ones is not easy, but somehow we managed to compile a list of our favorites — the 5 most interesting Medieval castles in Europe.

We start our list with one of the most famous castles in Europe and the most visited tourist attraction in Romania — Bran Castle. Set in the forests of Transylvania, Bran Castle is a castle very famous for one thing… or a person… or a fictional character… — Count Dracula, the famous vampire from a Bram Stoker’s novel.

But the truth is that the real Count Dracula, Vlad the Impaler, has nothing to do with this castle, nor has Bram Stoker ever visited it.

So where did his inspiration came from then?

From a myth! Many people believed that Vlad the Impaler was imprisoned in Castle Bran when he was captured by Hungarians in 1462. Historians mostly disagree, but they say that people choose to believe that he was in Castle Bran because of its mystical and dramatic vibe. Vlad was known as a very cruel ruler, who fought against Ottomans in the 15th century, and it is believed that he had a “forest” of wooden stakes on which his enemies were impaled. So, it was easy to connect his personality to this haunted castle, and it all makes one hell of a story.

Castle itself is looking pretty cool, especially because of its surroundings — imagine a foggy morning, and a castle that is peeking out from the forest, really spooky. Interior is not really spectacular, but there is one room that will give you the chills — it’s a torture room with different kinds of medieval torturing devices and very detailed manuals for them. Also, there are portraits of Dracula all over the place, even though he never really set foot into the castle. 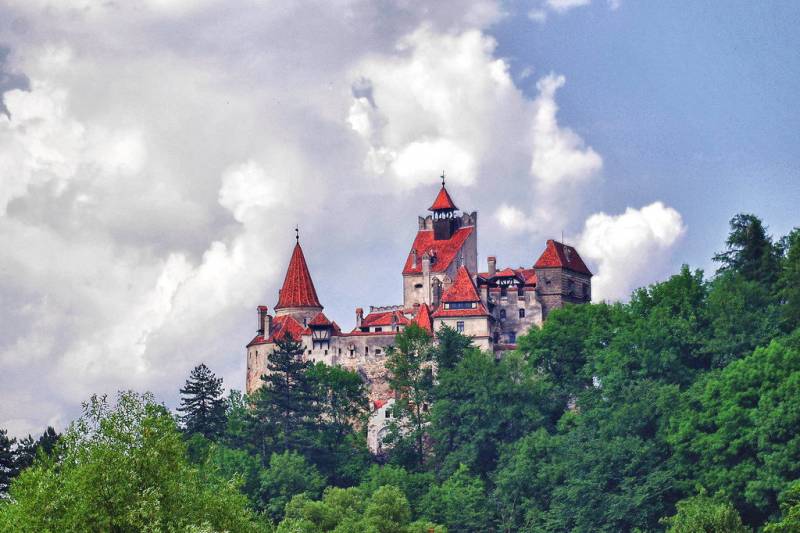 Did you know that Germany has over 20.000 castles on its territory? We assure you they’re all stunning, but one of them we found the most magical.

Burg Eltz (Eltz Castle) is one of the most beautiful castles in Germany, it looks like it came straight out of a fairytale. Unlike many others, it is not set on the hilltop or on the cliff, it is tucked deep into the forest, surrounded by amazing nature, between Trier and Koblenz. 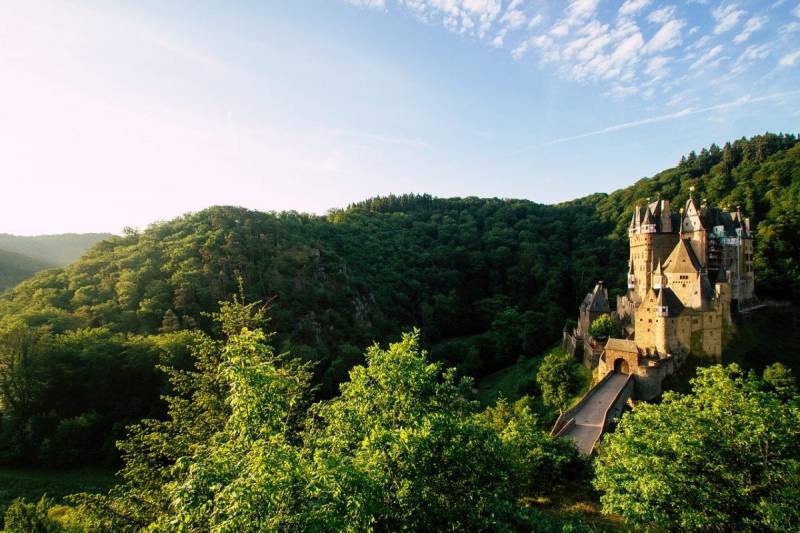 This fairy-tale-like castle dates back to the 12th century and it is still owned by descendants of the Eltz family that lived there 33 generations ago. In the 17th century, the castle was home to nearly 100 family members, in a total of 100 rooms. The Eltz Castle was more advanced than many of its contemporaries: its 40 fireplaces heated 80 rooms, whereas in other castles only a few rooms were heated. Also, it had 20 flushable toilets in the times when it was rare to have even one!

The dreamy castle was an inspiration for many poets, writers, and painters, but also it faced a few destruction attempts. But still, it remained almost intact in WWII, so we are still looking at almost-original architectural wonder. 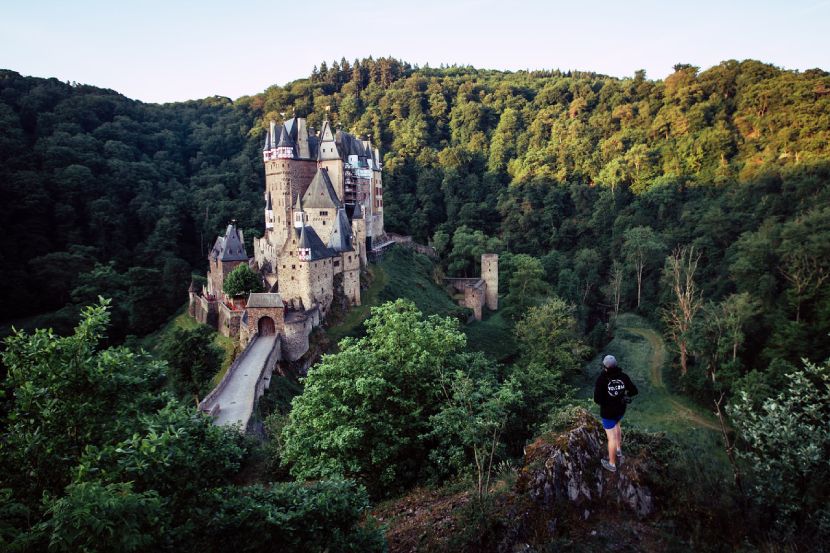 The Eltz Castle tucked deep into the forest

Windsor Castle, the Royal residence of the British royal family, is located in a calm little town Windsor in Berkshire, a county west of London. It is the oldest and largest inhabited castle in the world. This is where the Queen lives, but it wasn’t really built to be a residential palace, it was supposed to be a fortress. Henry I was the first royal to actually live there, and it was 39 monarchs in total that inhabited this enormous castle. 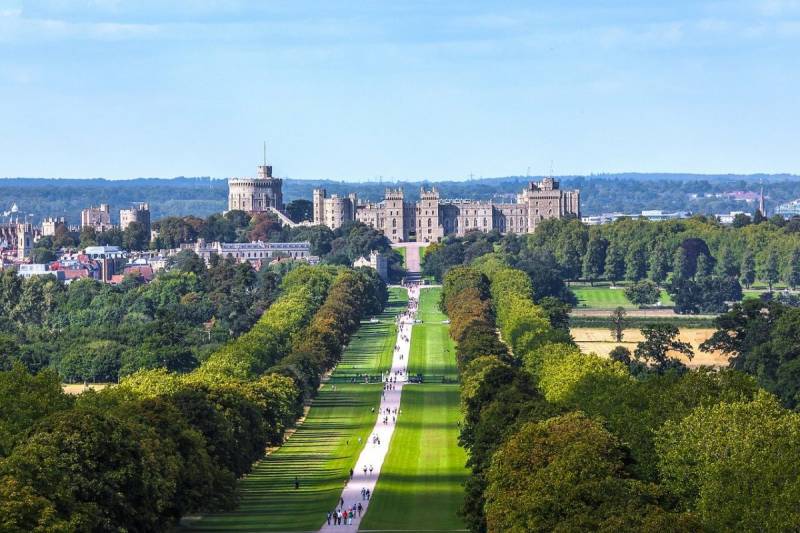 Windsor, the largest castle in Europe

The largest room of the castle is the St. George’s Chapel, which has seen a lot of royal weddings and is also the burial place to ten monarchs. It is said that not all of those royals rest in peace — some were beheaded, some poisoned, some killed by natural causes. It is said that some of them are still walking on the grounds of the castle, or is it just a legend?

Some inhabitants reported that they saw the silhouette and heard angry moans and groans of King Henry VIII, who beheaded two of his six wives. His second wife, Anne Boylen, who was beheaded at the Tower of London, was also seen somewhere inside the castle walls. These two weren’t the only ghosts seen among the castle walls but we are sure that they are the most interesting couple to be seen at night. 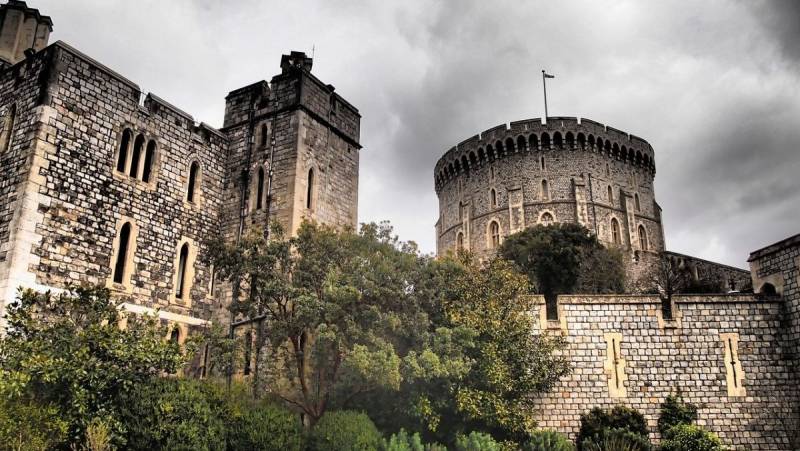 Windsor, the largest castle in Europe

Chillon Castle (French: Château de Chillon) is a gorgeous castle set on a small rocky islet on the Lake Geneva, in Switzerland, near the French border. It was built on a strategic location to control the traveling between the north and the south of Europe, on the gate of Alps. It is one of the most visited castles in Switzerland and Europe, and it is really impressive!

Like many other castles, this one has its own myths and legends, and it was perfectly interpreted by a famous English poet Lord Byron. In 1816 he visited the castle and wrote a poem “The Prisoner of Chillon”, about François de Bonnivard, who worked inside the castle walls. He was kept a prisoner there for four years in the 1530s for the crime of committing unpatriotic acts against the holders of the castle, and he was tortured the whole time. 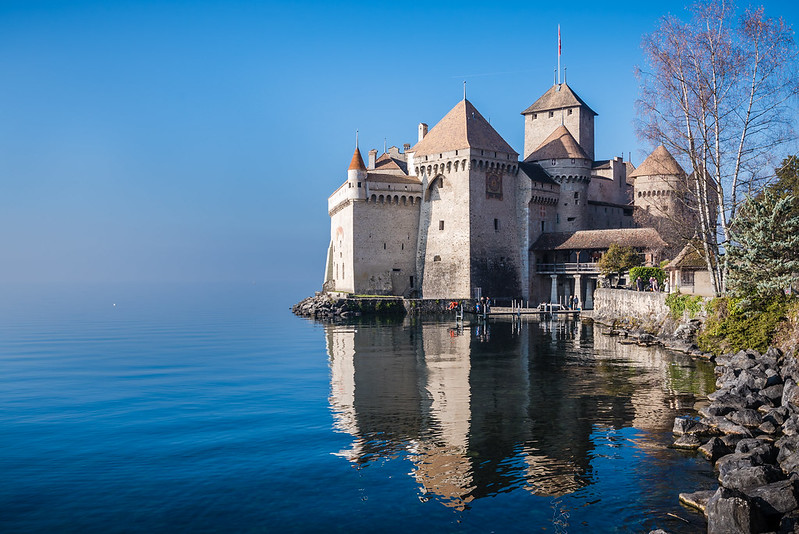 From the time when it was built, until the 19th century, the castle was used as a prison for all those who were found unsuitable, whether the reasons were political or religious. Also, all the women who were considered witches were kept here, tortured, and burnt.

This castle is something special, even though its walls hide such an ugly history. The architecture is amazing, and the views from its towers are even more beautiful. 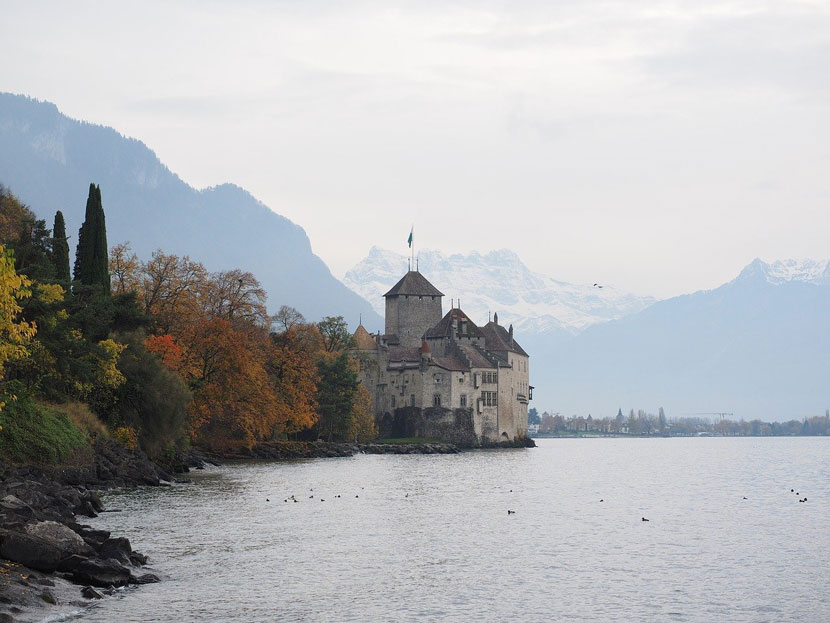 Chillon Castle on the Geneva Lake

Predjama Castle is a smaller but quite impressive castle, set in the south-central region of Slovenia, near the town called Postojna, and famous Postojnska jama (Postojna Cave). This Rennesaince castle was built within a cave-mouth, under a rocky arch, to be difficult to access, and this made it look like it’s carved in stone. The name Predjama Castle, or Predjamski grad in Slovenian, literally means “the castle in front of a cave”. 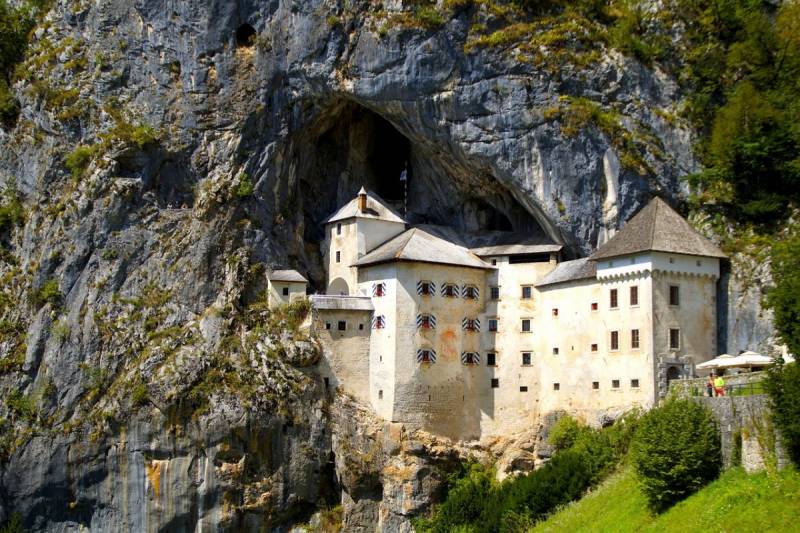 This castle is known to be one of the most dramatic castles in Europe, and we can’t doubt it. It was first mentioned in the 13th century, as the Castle Luegg, but it wasn’t until the 15th century that it became really famous, and it’s because of his owner at the time — the knight Erasmus of Lueg. He was basically like a Robin Hood, he stole from the rich to give to the poor. This castle was the place where he hid most of the time. Erasmus used the caves and tunnels behind and under the castle as a hiding place and a gateway from the castle when he needed to run from the enemies who came after him. The legend says that the Austrian Emperor Frederick III wanted to starve him to death, but because of the secret tunnels, he managed to survive. Eventually, he was caught and killed, but the castle served him well.

After this, the castle was destructed and it was rebuilt two times. The castle that we can see now was built under the original Medieval fortification, and it remained intact to the present day. Nowadays, the castle serves as a museum and it is possible to explore both its rooms, and the tunnels and cave system in front of which it was built. 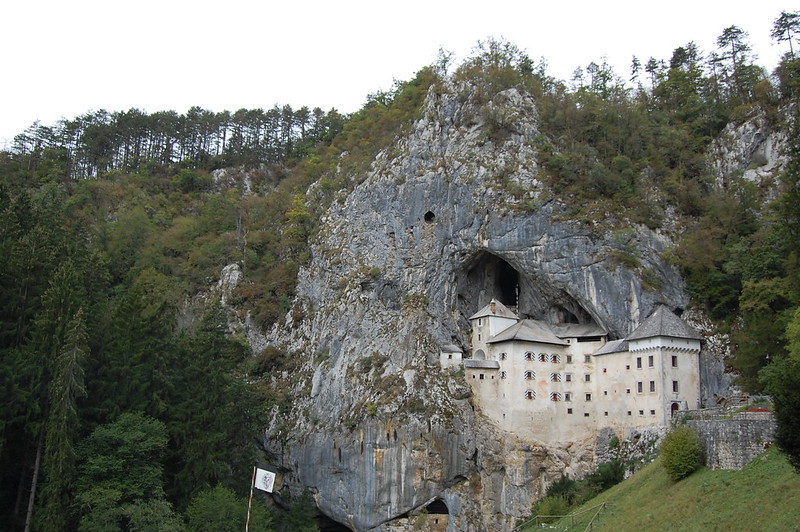 As these buildings are all very old, there are many myths and legends tied to them. We love hearing such stories, they make those places even more special. It’s interesting how one so beautiful castle can hide so many dark secrets, even if they’re not true stories.

Have you ever visited some of these castles? Or have you been to any other interesting Medieval fortifications around Europe? Leave us a comment, we’d love to know! Especially if you have an interesting and mysterious story to tell. 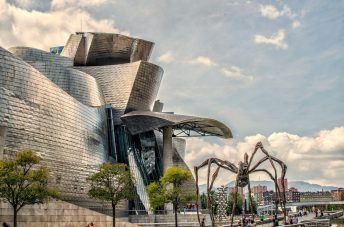 10 Most Unique Buildings in Europe 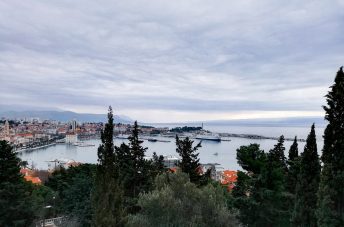