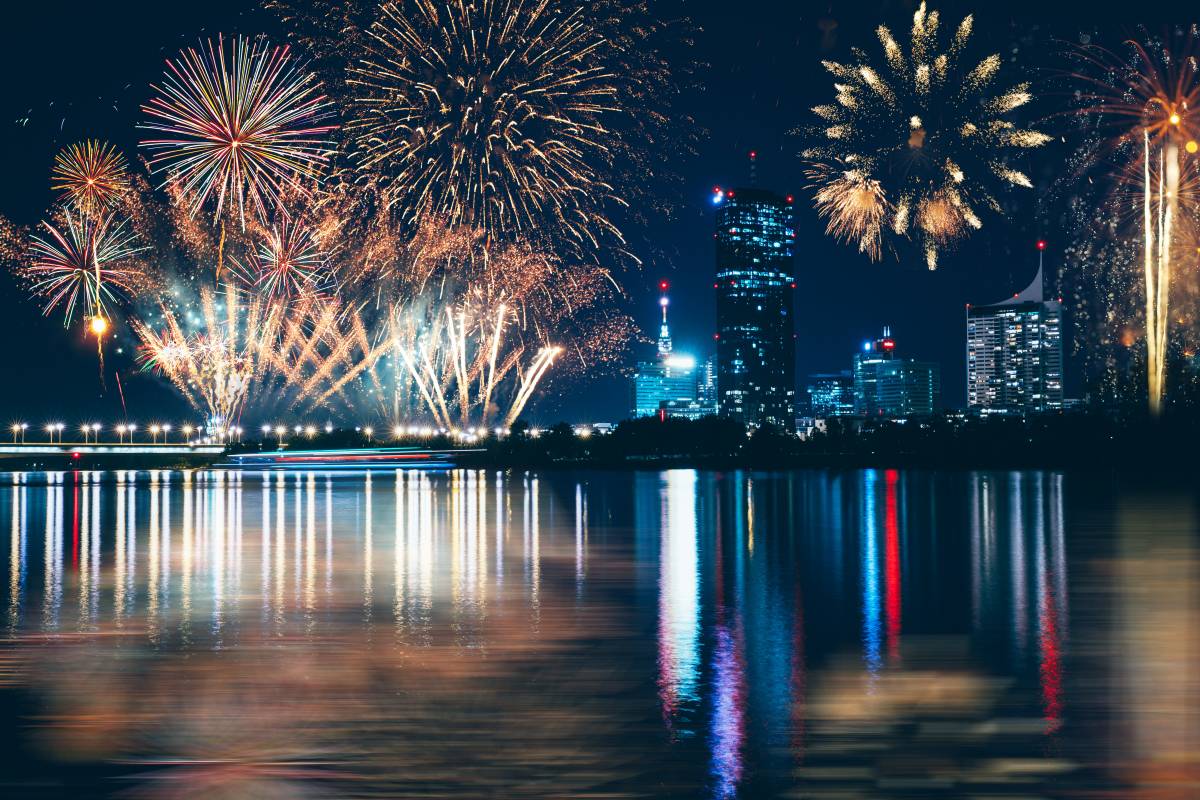 Wow! And just like that, 2020 comes to an end. It has been a crazy and challenging year for all of us, and most of us couldn’t have imagined the tremendous impact the COVID-19 pandemic would have on all our lives when we were celebrating the start of 2020 so carefree, just 12 months ago. Although you might not be able to celebrate New Year’s Eve as bombastically as usual and you’re also not able to travel, we want to take you on a short tour around the globe to show you 8 curious and unusual New Year’s traditions from various countries, so read on! If you also want to increase your chances of having a legendary 2021, why not try out some of these rituals?

Let’s start with the country we are situated in, Austria. Here we have a tradition which is also common in Germany – lead pouring (“Bleigießen”). You usually start this ritual shortly after midnight and it goes like this: You put a small piece of lead, which comes in different shapes like tiny buildings or animals, on a spoon and hold it over a candle until it is fully melted. Then you pour the hot lead into a container of cold water and see what happens. The shape that the lead forms is said to reveal a person’s fate or destiny for the upcoming year! So why not try to predict your future this year?

The next tradition we’ll look at is also common in several countries around the globe, but it is especially popular in Italy. Yep, now it gets a little more delicate – we are talking about wearing red underwear on New Year’s Eve. Red is not only the color of love in some cultures, but in Italy it also symbolizes fertility. So if you are hoping to become pregnant next year, why not try wearing red underwear this time?
In some Latin American countries such as Mexico or Bolivia, wearing red underwear for New Year’s should help you to find love in the next year. However, if you’re sick and tired of looking for true love and would rather opt for money, choose yellow underwear as this is supposed to bring you wealth and luck.
Speaking of luck, the belief that red underwear will bring you good luck in the upcoming year is also widespread in Spain, where you should get even luckier in the next year if you have received the red underwear as a gift. Nice thought, although you might need to reconsider twice who you gift with red underwear to avoid inappropriate or uncomfortable situations!

Let’s stay in Spain and look at another tradition the Spaniards practice on New Year’s Eve. Have you ever heard about the 12 grapes? With 12 seconds remaining until midnight, you are supposed to eat 12 green grapes to have good luck in the next year. However, you really have to be quick, because if you don’t manage to eat all of the 12 grapes within those 12 seconds, it means that you will have bad luck in the upcoming year – and, let’s be honest, nobody wants that!

We’ll still stay in Europe and look at an, admittedly, kind of weird tradition that is common in Denmark, which might lead you to think that the Danes need to calm down a little bit. Here, it brings good luck to throw china at your friends’ and neighbors’ front doors on New Year’s Eve! This act is seen as a means of releasing tension and aggression which you leave behind in the old year. It is believed that the bigger the pile of broken dishes outside your home, the luckier your upcoming year will be, so why don’t you visit some of your friends, yell “Happy New Year’s!” and throw some dishes at their houses? Just kidding, if you are thinking of participating in this tradition, you should at least give them a warning beforehand.

We are now coming to Ireland to talk about mistletoe. You might be familiar with the tradition that it brings good luck if you kiss your love beneath the mistletoe in the lead-up to Christmas, but in Ireland, the mistletoe saga is taken to the next level. Here, single women are advised to sleep with mistletoe under their pillow on New Year’s Eve to find their future husband in the next year. It might be worth giving this a try, because even if you don’t meet your future husband in real life afterwards, he might at least appear in your dreams?

However, the Irish are not the only ones putting stuff into their beds on New Year’s Eve. In Colombia, it is common to place three potatoes under the bed. Yes, you’ve heard right, one peeled potato, one unpeeled, and one half peeled. At midnight, they pull out the first potato they touch, and this specific potato should predict the upcoming year. Peeled symbolizes financial problems, unpeeled indicates abundance, and half peeled stands for somewhere in between. If you try out this ritual, don’t you try to cheat by only placing three unpeeled potatoes under your bed, destiny sees everything!

We will stay with the wealth theme now, because, let’s be honest, who of us wouldn’t mind a financial blessing next year? In the Philippines, New Year’s is also centered around this topic, namely cash. In order to increase one’s cash flow in the next year, people try to use as many round things representing coins (=wealth) as possible on New Year’s Eve. Starting from round food to round decoration, they try to keep it all ‘’merry-go-round’’.

Last but not least, let’s look into a Japanese New Year’s tradition. Just before midnight, the Japanese eat soba noodles. The Toshikoshi soba, which literally translates to “year crossing”, is a buckwheat noodle dish with a lot of symbolism – the long noodles symbolize the crossing from one year to the next. As the noodles are also easy to cut, they symbolize letting go of the past year’s regrets and should encourage you to start your new year on a clean slate.

We also hope that you can start the year with no regrets and are ready for all the positive things that 2021 certainly has in store for you. Happy New Year to you and your loved ones, stay safe & stay sane! 😉