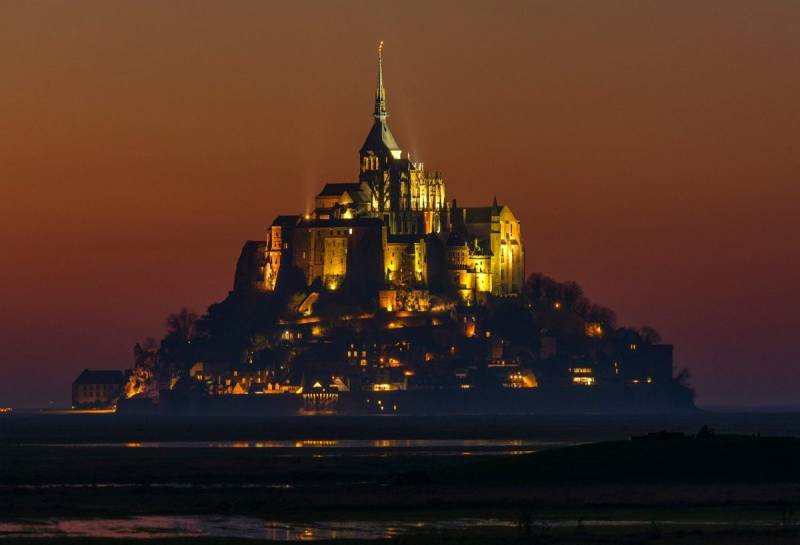 Mont Saint Michel is a Medieval village on a tidal island that sits about one kilometer off the French coast in Normandy. With only less than 50 residents and over 3 million tourists each year, this is one of the most visited places in France. This wonderful complex inspired the castle from Disney’s Tangled movie and it really looks like it came straight out of a fairy-tale. You may have heard or read a thing or two about this Gothic Benedictine abbey, but we’re sure there are some things that you didn’t know. So, if you’re interested in learning new things, keep reading, we listed 8 facts about the medieval village Mont Saint Michel for you.

The Idea for this Abbey Came from a Dream

Mont Saint Michele is a Gothic Benedictine abbey surrounded by a medieval village, and it is an architectural masterpiece and a living testament to French history and culture. But did you know why it was actually built?

The legend says that Mont Saint Michel was conceived in a dream. The archangel Michael appeared in 708 to bishop Aubert of Avranches and instructed him to build a church on the rocky islet. Bishop Aubert ignored him the first and the second time, and when archangel appeared in his dream for the third time, he took it seriously and started building the church. So, it was just a small church in the beginning, and over the centuries it evolved into this amazing abbey that we see today. 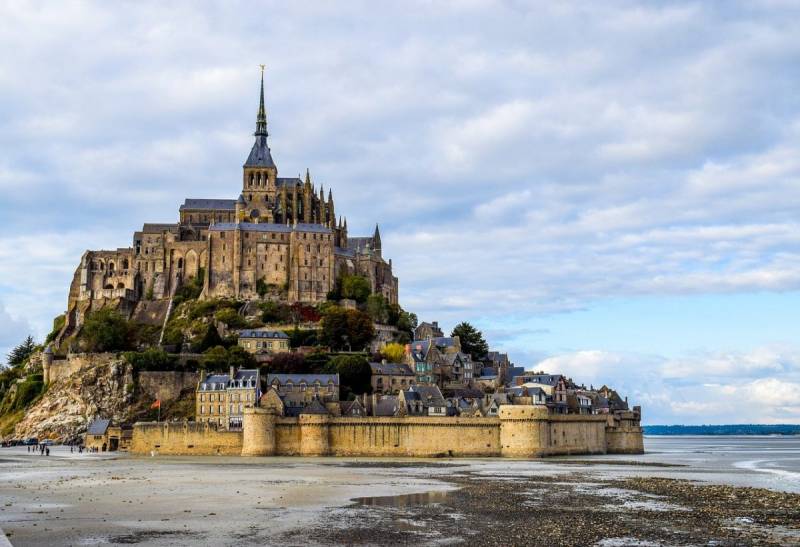 Mont Saint Michel — the Medieval village on a rock

It Is an Important Pilgrimage Destination

Around the 10th century, Mont Saint Michel became a pretty important pilgrimage destination in Europe. It was second to Santiago de Compostela in Spain, so you must say it was pretty popular. Back then the journey was very difficult; no bridge connected the island to the mainland, so anyone who wanted to visit had to wait for the low tides to cross. Being able to complete this trip was proof of your commitment to God.

One of the reasons that pilgrims visited this tidal island was to see the discovery that happened back then — when the new buildings were finished, a skeleton with a finger-sized hole in its skull was found. It was believed that those were the remains of bishop Aubert of Avranches, and the hole was where the archangel Michael poked him in the head when he appeared in his dream for the third time.

It Was Never Conquered by the English

That’s right, even in the Hundred Years War English people couldn’t conquer Mont Saint Michel. This is because of its strong fortifications, high tides, and the surrounding quicksand as well.

Mont Saint Michel played an important role in some historic events. In 1067, this monastery gave its support to William I, or William the Conqueror, Duke of Normandy, in his claim of the throne of England. To show his gratitude, he found a similar small island on the English side of the channel, off the southwestern coast of Cornwall, and created a replica of Mont Saint Michel, called St Michael’s Mount of Penzance. It is much smaller and less impressive, but it incredibly resembles the French island. It was also built on a tidal island, so when the tides are low visitors could walk to the Mount, but when the tides are high, they had to use a boat in order to get there. 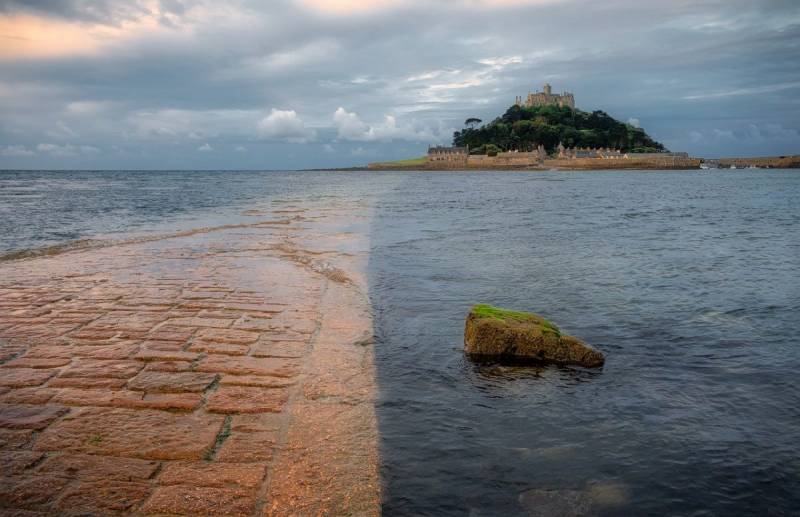 It Was Once a Prison

The purpose of the abbey changed a little bit at one moment. Louis XIV, the king of France, started using a part of the island as a political prison in the 17th century. During the French Revolution in the 18th century, there were hardly any monks; the abbey got closed and converted into a prison known as the “Bastille of the Sea”. At some point, there were 14.000 prisoners held there.

In the 19th century, many of the influential figures, including Victor Hugo, launched a campaign to restore the previous status of the island and to save this architectural treasure. The prison was finally closed in 1863, and the island was declared a historic monument in 1874. Mont Saint Michel and its whole bay were even declared a UNESCO Heritage Site in 1979, as a place of cultural, historical, and architectural significance, and as both man-made and natural beauty.

It Has the Largest Tides in Europe

Mont Saint Michel is where you’ll find the largest tides in Europe — it is said that they can reach almost 14 meters. The tides rise pretty quickly, so it is extremely dangerous to be found somewhere on the surrounding sand in the wrong moment. It is even forbidden to cross the sand on your own, you can do it only in the company of a certified guide. 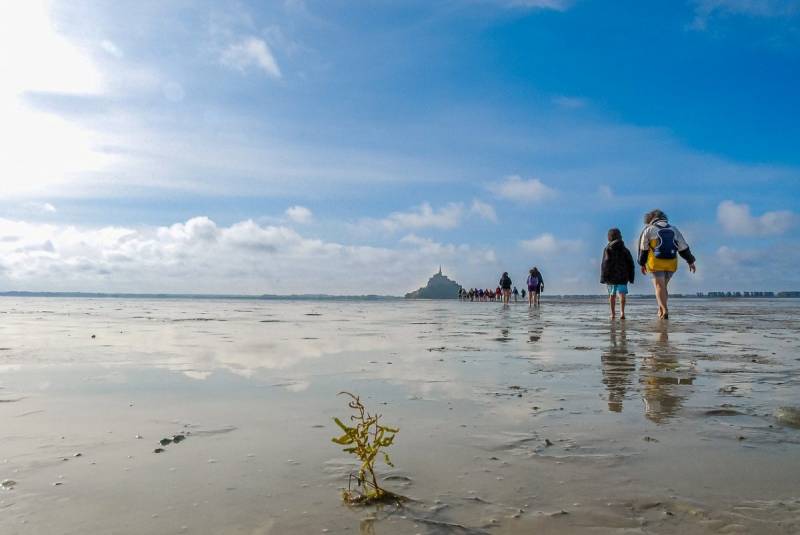 It Inspired a Few Movie Castles

If you think you’ve already seen a similar castle or island — you’re right. This island inspired the creators of the Lord of the Rings — Minas Tirith, the capital city of Gondor was designed to resemble it. Also, the castle in Pixar’s animated movie Tangled looks a lot like Mont Saint Michel.

It’s the Most Visited French Attraction Outside of Paris

With over 3 million visitors they have each year, Mont Saint Michel is one of the most visited attractions in France, but only after the famous Parisian attractions. It will never beat the Eiffel Tower, which we recently wrote about, let’s be honest. There are only about 50 residents on the island, so, it’s all about tourists. The place is full of cute gift shops and restaurants, and it’s been like that for ages, or to be precise since the Middle Age, when it got very popular among pilgrims. Also, if you’d like to fully explore the island, there are hotels where you can spend the night — it would be a fun experience, once this health crisis is over, and we can all travel again.

So, don’t forget to add Mont Saint Michel to your bucket list, it is a wonderful and unique place on Earth. Unfortunately, we’ll all have to wait a little bit to actually visit this attraction or any other attraction in the world. But if you love learning secrets about world-famous landmarks, check out our digital tour guide that will let you know all the interesting stories hidden in the facade of the St. Stephen’s Cathedral — one of the best known symbols of Vienna.