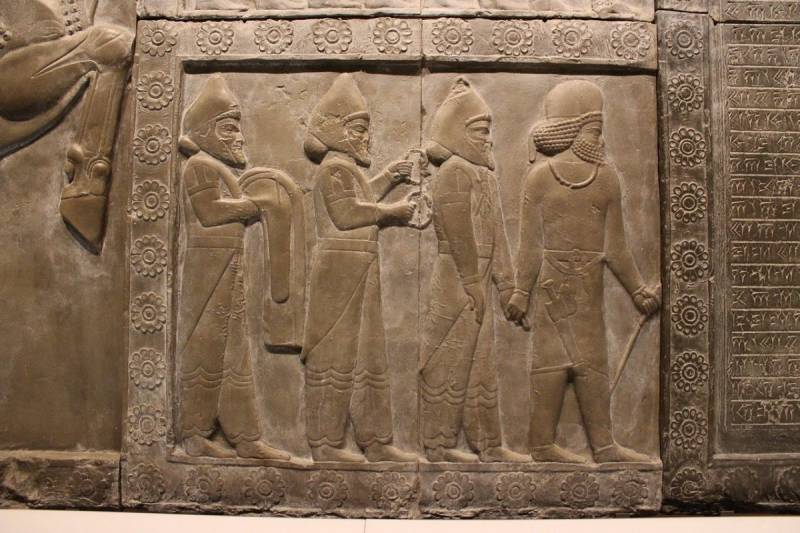 We started this story about the most interesting ancient cultures that ever existed a while ago. In that blog post we told you a little bit about ancient Rome, ancient Greece, and exotic and interesting Mayas and Incas. You’ve read a little bit about their history, fun facts, and about the impact they had on the life that came after them. You’ve waited long enough for the part two, so here it comes…

The Indus, or Harappan Civilization as they were also known, is one of the oldest civilizations that existed on the Indian subcontinent and one of the three oldest civilizations in the world. Roughly, it is said that they existed from 3300 BC to 1300 BC. They were located in the basin of the Indus river, and they are known as one of the most widespread ancient cultures, as they occupied the area of 1.500 kilometers up the alluvial plain of the river. If you take a look at today’s world map, the area that they occupied lies on the territory from northeast Afghanistan to Pakistan and northwest India.

We don’t have that much information about their life, because the Harappan language and the Indus script are not deciphered yet. They had a system of writing so unique and mysterious that every attempt to decipher it failed. But still, we can learn quite a lot from the excavation sites around Mohenjo-Daro on the lower Indus, and at Harappa, further upstream. The evidence shows that Harappan people were very advanced — they led quite civilized city life, the cities were well-planned; they made their houses out of baked brick, they had wells, bathrooms, and an elaborate underground drainage system. 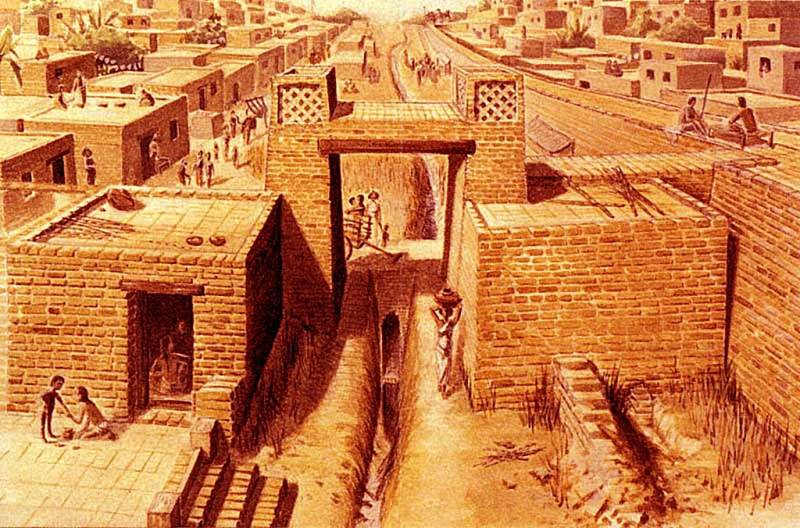 Also, the excavation sites show Indus people had developed some new techniques in metallurgy and handicraft. They were quite advanced in producing different objects made of copper, bronze, lead, and tin. Different sculptures, seals, bronze vessels pottery, gold jewelry, and anatomically detailed figurines in terracotta, bronze, and steatite have been found at the excavation sites. This shows that they were very advanced in creating arts and crafts as well, and who knows what else we will learn once we manage to understand the words they left behind. 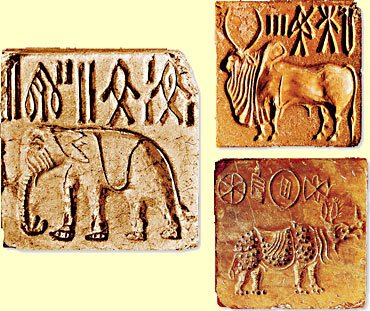 Seals from the Indus Valley

So, what happened to this advanced civilization? Two main theories explain the decline of the Indus civilization, that happened around 1800 BC. One says that the drying up of the Saraswati River was the main cause, while other experts speak of a great flood in the area. Either event would make life in the area almost impossible and would inevitably lead to the abandonment of the cities. After this, around 1500 BC, a large group of nomadic cattle-herders, the Aryans, migrated into the region from central Asia, which was considered an invasion which was the main reason for the collapse of the Indus Valley Civilization, but this hypothesis is still not accepted today.

Ancient Egypt is one of the oldest and most culturally rich civilizations that ever existed. This majestic civilization from the banks of the Nile River is known for its prodigious culture, its pharaohs and their marvelous pyramids, and the Sphinx.

Ancient Egyptian civilization reached its peak during the New Kingdom when pharaohs like Ramesses the Great ruled and made another contemporary civilization, the Nubians also came under Egyptian rule. After this period, it entered a period of slow decline. 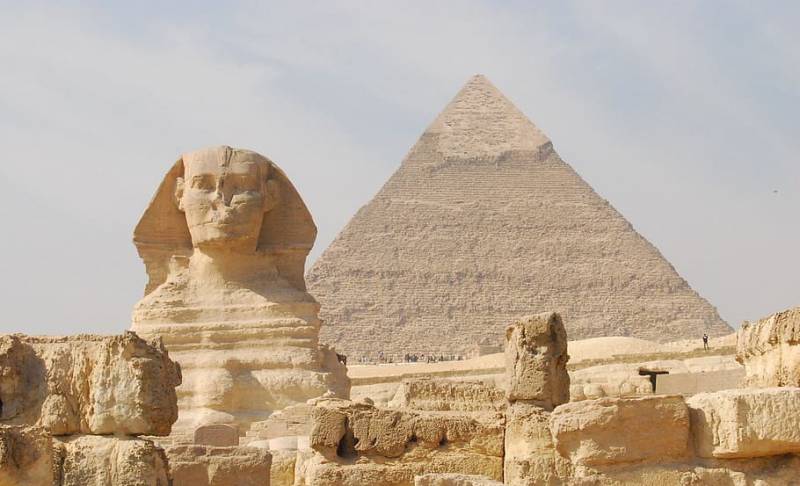 Egyptian pyramid and the Sphinx

During its history, Egypt was invaded or conquered by a few foreign powers: the Hyksos, the Libyans, the Nubians, the Assyrians, the Achaemenid Persians, and the Macedonians under the rule of Alexander the Great. The Greek Ptolemaic Kingdom, formed after Alexander’s death, ruled Egypt until 30 BC, when, under the rule of Cleopatra, it fell to the Roman Empire and became a Roman province.

The ancient Egyptians were very advanced in quite a few fields — math, architecture, and medicine. They had a great knowledge of anatomy, injuries, and practical treatments — they used raw meat for bandaging wounds, opium for pain relief, and honey-soaked linen to stop infections. Ancient Egyptian surgeons were also capable of setting broken bones and stitching up the wounds.

We found it very interesting how ancient Egyptians were advanced with regards to gender equality — thought of men and women as equal before the law. This is quite clear if you take into consideration that two of their most important pharaohs were women — Hatshepsut and Cleopatra.

The main reason why this civilization is so popular even today is the great impact that it left on the whole human experience. They left some pretty amazing monuments, tombs, temples, and artwork that shows what is the human nation capable of achieving. Just take a look at famous pyramids of Giza, no one is 100% sure how such monuments were built, we can all just admire them. 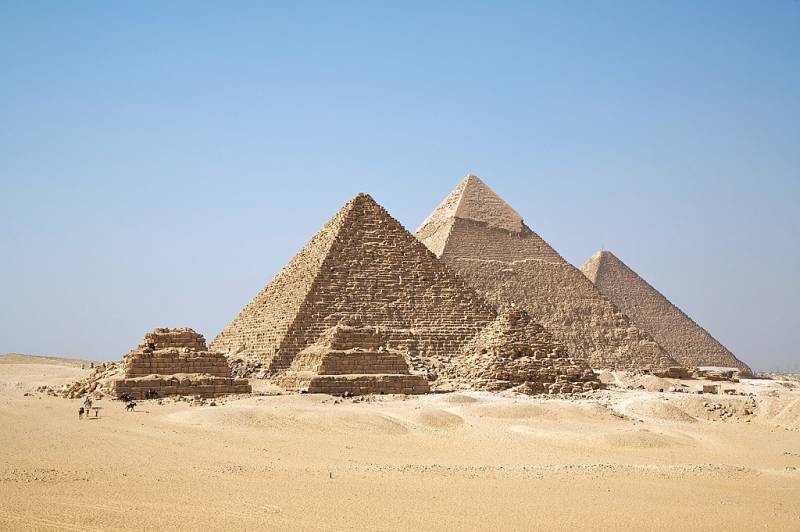 There is so much about Ancient Egypt that you need to know, that we didn’t dare to tackle — there’s so much that historians developed a separate field of study called Egyptology. If you’re interested in reading more about this marvelous culture, check out this article on the official History website: Ancient Egypt.

The first dynasty that ruled the Chinese civilization was the Xia dynasty, which started its reign in 2070 BC. This dynasty was considered mythical for a long time, until the first excavations that brought evidence about it, in 1959. The evidence shows that this dynasty ended in around 1600 BC as a consequence of the Battle of Mingtiao. The next dynasty that ruled Ancient China was the Shang dynasty, with thirty-one kings who reigned over the time of this dynasty until 1046 BC. After Shang, came the Zhou dynasty, which was the longest-lasting dynasty in Chinese history, and they ruled until 256 BC. This was basically the end of Ancient China, and it was followed by the period of Imperial China. 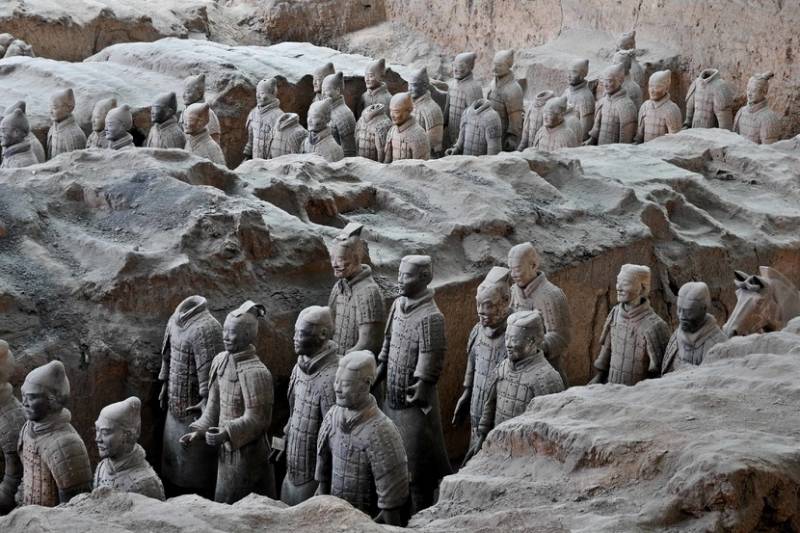 Sculptures of the Chinese warriors

Ancient China is another really advanced civilization, with quite a few important inventions that changed the life of mankind forever. They had their Four Great Inventions of Ancient China — printing, paper-making, the compass, and gunpowder. But besides these, they had tons of other inventions, such as kites and even toilet paper. Qin dynasty invented the crossbow that was later used as the main weapon of the Europeans.

Ancient Chinese people were the ones who came up with the time-keeping, by inventing their Shadow Clock. Also, the first recorded observations of solar eclipses and comets were made in China.
Ancient China was also very advanced in medicine, but in its own way that differs very much from Western medicine; they had a specific understanding of the human organism — it is like a miniature universe. Also, they invented acupuncture that is a frequently used treatment in Chinese medicine, and it got very popular all around the world. 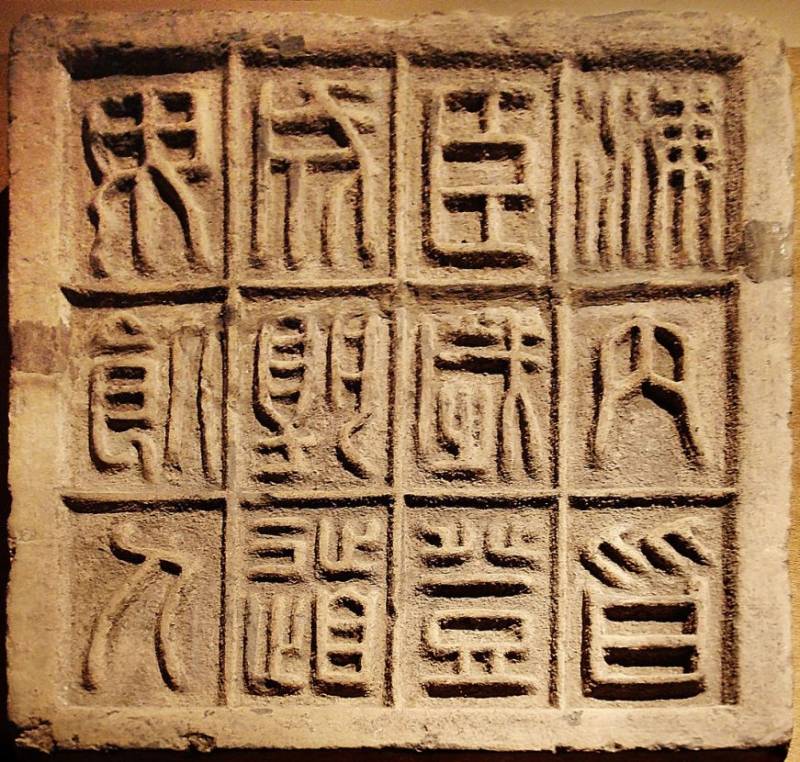 There is so much to know about this culture, we suggest you check out the following link if you’d like to learn more, especially about the dynasties that ruled this civilization: Ancient China.

The Mesopotamian civilization was located between the two rivers: Tigris and Euphrates, located on the territory of modern-day Iraq and Kuwait. The name Mesopotamia came from the Greek language, and it literally means “between two rives”. The fertile grounds in this area were the reason why the first villages and towns were formed, and from them, the first civilization emerged.

There are many other ancient cultures associated with the Mesopotamians, such as the Sumerians, Assyrians, Akkadians, Babylonians, and Persians. It is a bit confusing to understand this period because they interacted with and ruled over each other over the course of several thousand years. But it is important to tell a little bit about each of these civilizations, so just keep reading…

The Sumerians were the first form of human civilization and the people that invented writing. They were organized in city-states where each city had its own independent government ruled by a king. The invention of the wheel is also credited to them. We must not forget to mention the famous Epic of Gilgamesh, which is the first great work of literature! Their way of organization, culture, and writing paved the way for all future civilizations. 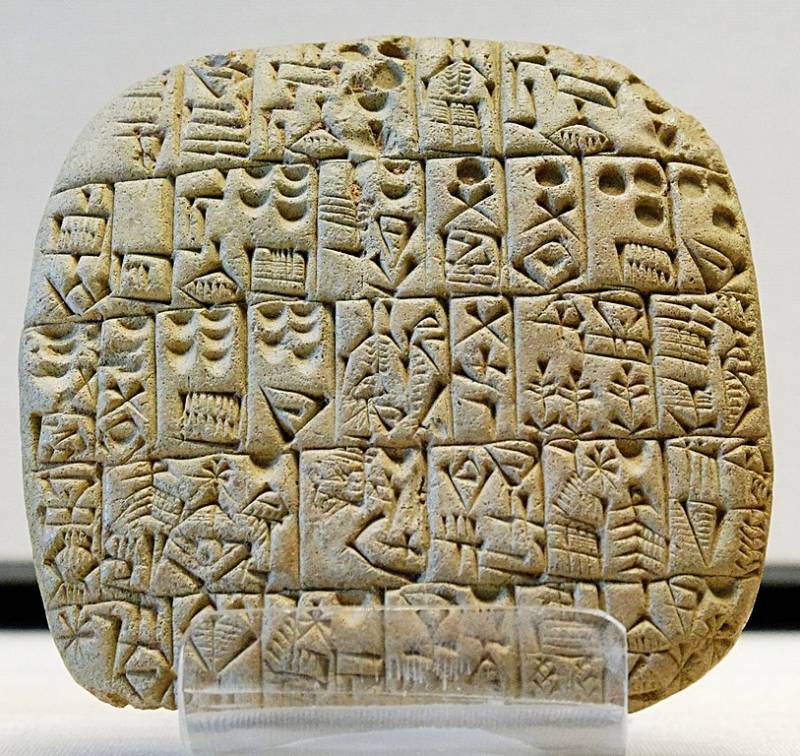 After Sumerians came the Akkadians who formed the first united empire with one ruler. The Akkadian language replaced the Sumerian language during this time and became the main language throughout the history of Mesopotamia.

The next ones were Babylonians whose city of Babylon became the most powerful city in Mesopotamia. Throughout the history of the region, they created vast empires that ruled much of the Middle East. The Babylonians were the first to write down their system of law; their King Hammurabi created the Code of Hammurabi — the oldest written law in the world. 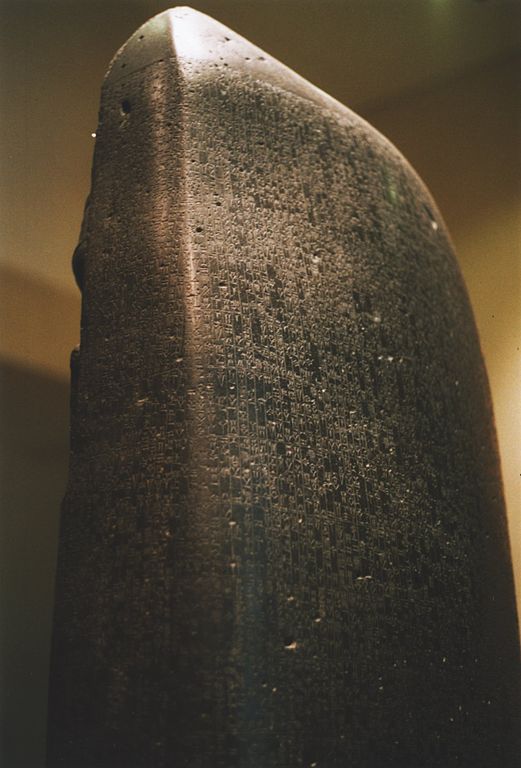 The Assyrians came out of the northern part of Mesopotamia; they were a warrior society. They also ruled much of the Middle East at different times over the history of Mesopotamia. Most of what we know about Mesopotamia comes from clay tablets found in Assyrian cities.

At last, there were the Persians, who put an end to the rule of the Assyrians and the Babylonians. They conquered much of the Middle East including Mesopotamia.

They all did so many things for the first time, and left their mark on our planet for sure — they were the first distinct culture ever! Again, there is so much to learn about these civilizations, we wouldn’t dare to tackle all the historic facts here, but we recommend you visit the following link, for more information: Mesopotamia.

It is really hard to create a blog post about these historic topics, there is so much more to know and to write about. But hopefully, we reminded you about the ancient cultures that existed a long time ago and were so important for the development of life as we know it today. We highly encourage you to explore more and let us know of any interesting facts that we missed — we’d love to know more!