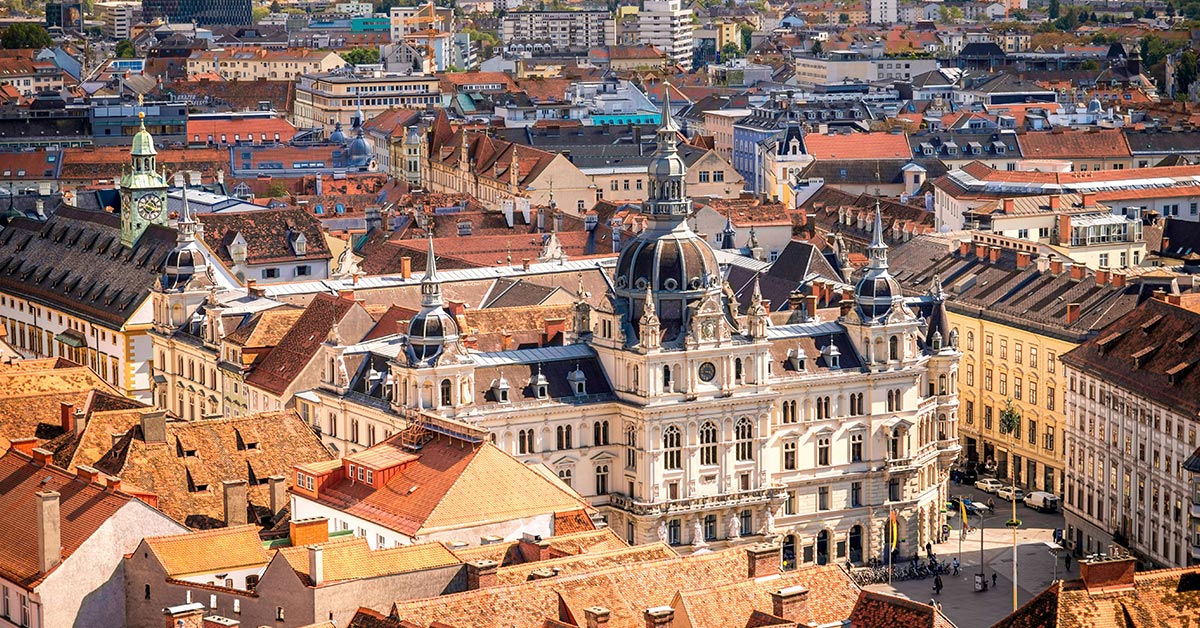 Graz (Slovene Gradec – a little castle on the top of the hill) is the second-largest city in Austria and a must-visit location for all you culture lovers. This lovely Styrian city surely has many exciting cultural attractions and institutions, so let’s check out what are the best places to experience culture in Graz.

The Old Town of Graz

Graz is often referred to as “Vienna’s little sister“ and, indeed, it has some similarities, but it’s a lot more modest. Still, its well-preserved Old Town is stunning, with amazing architecture that was pushed into the limelight when the city was named European Capital of Culture in 2003.

Graz is also considered to be the northernmost Mediterranean city with the narrow, cobbled streets and renaissance vibe. Located near borders it took something from Italy, Central Europe, and the Balkans — that is why it feels so Mediterranean and very much German at the same time.

Around the Old Town’s streets, you will see its beautiful medieval buildings, Italian-style palazzi, and romantic courtyards. On the main square called Hauptplatz, you’ll see the gorgeous Town Hall and many other picturesque buildings with wonderfully ornated façades.

The streets of the Old Town will teach you a lot about the Graz’s and Styrian culture, so be curious while exploring, and enjoy.

Because of its geolocation, Graz was often a target of many attacks coming from the east. So, in order to be ready for the defense, the city built the Zeughaus (armory) back in the 17th century. At that time, it was the most important “equipment headquarters” in the south-eastern part of the Habsburg Empire.

Styrian Armory (Landeszeughaus) is a part of the Universalmuseum Joanneum — a group of museums and galleries located all around Graz. This armory is the largest surviving historic armory in the world, with around 32,000 exhibits including weapons, tools, and shiny armors — everything you’d need for the defense. Its impressive weaponry collections, as well as the magnificent façade with two Baroque statues of Mars and Minerva, the god and goddess of war, attract many visitors from around the world. This amazing place will teach you a little about the history of the province of Styria from the late 15th up to the early 19th century and will show you the extraordinary collection of weaponry that was used back in the day.

If you’d like to learn more about the shiny armors you can see in the Styrian Armory, check out our FREE guided tour: “On the Trail of the Landeszeughaus’ History”

Eggenberg Palace is a UNESCO World Cultural Heritage site, just like the Old Town of Graz. It is a beautiful Baroque palace that is set in the middle of a gorgeous park. There are also four museums in the complex. Interesting fact: The Palace was designed according to numeric symbolism – it has 365 windows and 24 staterooms.

When you’re done with exploring the palace, you can hang out in its lovely park. There are a few kinds of tickets for this cultural place, please visit their website for the official information on how and when you can enjoy this wonderful complex and its gardens.

The Alte Galerie (or the Old Gallery) is one of the museums located in the aforementioned Eggenberg Palace. This amazing gallery displays a vast collection featuring artworks from Medieval times to the Baroque period. You will learn a bit about the history of Austria, including stories about its saints, sinners, heroes, and villains. The gallery is located in the extraordinary palace, so, besides the wonderful historic artworks, you’ll enjoy the architecture as well.

The Neue Galerie (the New Gallery) is another amazing art gallery in Graz. It is located in the Old Town itself, so it’s pretty easy to get to. In this gallery, you will find a great range of art collections: there’s everything from Biedermeier, Jugendstil, and Expressionism through to classic Modernism. This is the place where you’ll find the great works of many famous artists, including Ferdinand Georg Waldmüller, Egon Schiele, Gustav Klimt, Maria Lassnig and Arnulf Rainer as well as international artists such as Marcel Duchamp, Robert Rauschenberg, and Fred Sandback. If you’re a little bit confused with the randomness of contemporary art, this gallery will help you get to know it better.

Künstlerhaus is another exhibition house for visual arts, and it’s dedicated to contemporary arts. In this gallery, it’s not all about the art that you come to admire, but also about the space where it’s on display. Künstlerhaus is set in a newly renovated building that dates back to the 1950s. The building was designed by Robert Haueisen and it slightly resembles the Vienna Secession building. In this lovely gallery, you’ll see contemporary art from the current international scene, together with the involvement of amazing Styrian artists.

If you are a fan of interesting modern museums go visit Kunsthaus Graz (Graz Art Museum) with an extraordinary shape and spectacular rooftop view. This robotic-heart-shaped building was built in 2003, as part of the European Capital of Culture celebrations, and it became the new architectural landmark of Graz. Because of the way it contrasts its historical surroundings, it looks like it came from another world, so the locals nicknamed it a “friendly alien“. Also, if you get inside this peculiar building, you’ll get to see the city landscape from another perspective.

Graz is an amazing cultural city with many cool museums, galleries, and other cultural places that will teach you a little bit about the culture of this Styrian gem. If you’re already interested in exploring some of the amazing art galleries that it has to offer, we highly recommend you to start with the Kunsthaus — it’s really something special.

If you’re interested to learn more about the architecture of this interesting gallery, check out our guided tour on the link below — you can enjoy it for free!

This guided tour will explain how the Kunsthaus came into being, why it looks so strange, and tell you about everything else the building has to offer.