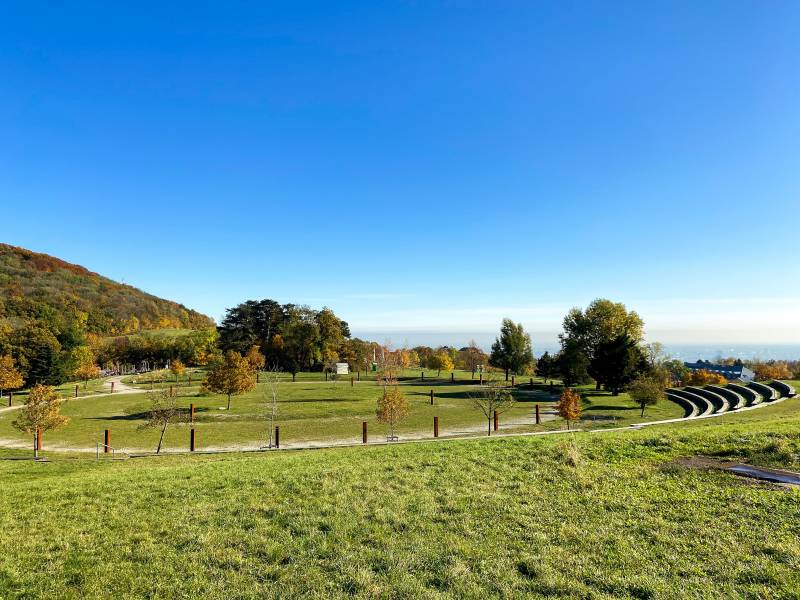 Late fall has arrived in Vienna. The days are already short and dark, and it’s been a while since we last had a sufficient dose of sunlight. With the dim light and the morning mist, the city is often covered in a magical twilight. So what about an enchanting fall walk?

As tempting as it might be to just stay in your warm and cozy home, we decided to explore some places in Vienna you might not have visited to entice you outside. The options for outdoor activities are unfortunately rather limited at the moment, so we thought we’d give you some inspiration for beautiful walks to not only get some fresh air but also soak in the enchanting atmosphere and relax. As diverse as these places are, what they have in common is their unique and sometimes even magical atmosphere. So follow us on our little tour and explore the loveliest fall walks Vienna has to offer, away from the usual tourist destinations.

In the Vienna Woods on scenic Cobenzl hill, you will find a true gem. Get off bus 38a at the stop ‘Cobenzl Parkplatz’ and walk towards Himmelstraße (Sky St.), and you will eventually reach ‘am Himmel’, which translates literally to ‘in the sky’. You do actually feel like you are in the sky, as the Vienna city center and the Danube River lie beneath your feet. Take some time to enjoy this breathtaking view and marvel at the brightly colored leaves of the surrounding hills and the vineyards in front of you. Continue walking to reach a unique spot called ‘Lebensbaumkreis am Himmel’ (Tree of Life circle in the sky). Arranged like an amphitheater, this sustainable natural monument was established 23 years ago and offers a place of peace and relaxation. When you are lucky weather-wise, take a seat on the wooden benches to enjoy the sun and nature to the fullest.

The Tree of Life circle in the sky consists of 40 trees that symbolize a whole year. Each tree – similar to our zodiac signs – is attributed to a certain period/month of the year. This means that you can find your personal Tree of Life, depending on in which month your birthday is,  and listen to its story or learn about its characteristics, as the trees are all equipped with a loudspeaker. This creates the illusion that the trees are actually talking to you. On weekends and holidays, classical music is played over the loudspeakers and the Tree of Life circle is transformed into a unique open-air sound space.

When you have soaked in enough sunlight and energy, continue to walk down the pathway until you reach a small patch of forest. This fall walk takes you through the trees to eventually reach a clearing. There you will find a beautiful, white chapel in the middle of the forest. Its name is the Sisi Chapel, and, as you already might have guessed, it is named after famous Austrian Empress Elisabeth (Sisi). Originally, the Sisi Chapel was built by Baron Carl Freiherr von Sothen to commemorate the wedding of the imperial couple Elisabeth and Franz Joseph I of Austria in 1854. It was the first neo-Gothic building in Vienna and was constructed according to the plans of architect Johann A. Garben. The chapel was already a popular city getaway destination to find peace and quiet in the 19th century.

However, in the 20th century, the chapel unfortunately deteriorated due to war and years of neglect, until it was renovated in 2002. In the course of this renovation, the inner room of the church was reshaped, and a new glass roof was installed to give a more tangible experience of how nature and culture are interrelated. With its big windows and white walls, the chapel indeed resembles a small castle. Today, it can even be rented as an event location, for example for weddings.

The next location we want to explore with you is Sternwartepark (Observatory Park) in the 18th district. You might have already visited popular Türkenschanzpark, but do you also know its little sister, only a 5-minute walk away?

The park is hidden behind walls, and once you enter it, you feel like you are in an entirely different world. It is one of Vienna’s natural monuments, and its special feature is its wilderness. For 130 years, a natural jewel has developed within its walls, with rare plants and animals such as European Union-protected stag beetles and middle spotted woodpeckers enjoying the privilege of this untouched refuge.

In the middle of this landscape, you find the University Observatory after which the park was named. Erected in 1883, it is one of the two observatories operated by the Institute of Astronomy at the University of Vienna, and it is still used until this day. For many years the park was only accessible for students and staff of the Institute of Astronomy, and it was only opened to the public in 2013. Take advantage of its open gates and enjoy some peace and quiet in this hidden nature oasis.

The next place we want to show you is closer to the Vienna city center, in the 9th district. Located in the scenic Servitenviertel which impresses with its gorgeous architecture, you can find the most beautiful staircase in Vienna, the Strudlhofstiege. It consists of several flights of stairs, fountains, and a lot of green plants such as ivy. The symmetrical lower part of the staircase houses two fountains, whereas, in the upper, asymmetrical section, you can enjoy the view of historic Palais Auersperg from the platform-like pathway which is also equipped with some benches.

The staircase got its name from the painter Peter Strudel, who opened his ‘Strudlhof’ painting school in this area in 1688, which was one of the first art colleges in Central Europe. The staircase was actually built in 1910 and represents one of Vienna’s Art Nouveau masterpieces. It reached special fame and consideration, as it was one of the key locations and the name of the novel “Die Strudlhofstiege” by Heimito von Doderer. Published in 1951, the novel tells the story of life in Vienna at around the time of World War I, and the staircase functions as a central meeting point for the protagonists, whose lives are connected through intrigues  and love affairs. Right next to one of the mentioned fountains, you find a plaque containing the poem ‘Auf die Strudlhofstiege’, which is part of the eponymous novel.

Have fun exploring all the details this unique staircase has to offer, and don’t forget to pull out your phone to capture those picturesque views!

The last fall walk we recommend is a place you must have heard of before if you live in or have already visited Vienna, but it’s still an evergreen for lovely walks. It’s Vienna’s largest park, the Prater. The area was bought by Emperor Maximilian II in 1560 to become a hunting ground and was later opened to the public. It still amazes with its spaciousness and wild nature; you feel like you are truly in a forest, right in the middle of the city. The green lung of Vienna is a popular recreational area nowadays, and one of its special features is definitely the Prater Hauptallee, which is a straight, 4,4 km long, pedestrian-and-bike-only lane running through almost the full length of the Prater.

Our tip for you when visiting the Prater is to check out Konstantinhügel (Constantin’s hill) and the cute little bridge over the pond below. Fun fact, this small pond was actually used for boat trips in former times. The bridge leading up to the hill is called Konstantinsteg (Constantin’s bridge) is structurally the oldest still existing bridge in Vienna. Not a lot of people know that there used to be a café on top of Konstantinhügel, which was originally opened by Eduard Sacher. After the world wars, the building remained empty and kept decaying until it was devastated in a fire set by unknown perpetrators in 1977, resulting in the demolition of the building’s remains. Nature regained its habitat, and today there are no more traces of the former building.

If you’re hungering for more glimpses into Vienna’s gems, make sure to follow us on Instagram and Facebook, where we’ll share more insights, photos, and videos of these spots in the next few days. Stay tuned!

For more outdoor inspiration and fall walks, you should also check out our Vienna Audio Guides!

Vienna On Wheels: From Schönbrunn Palace to Stubentor

Rent a bike, Segway, or scooter and explore the best Vienna has to offer on wheels.