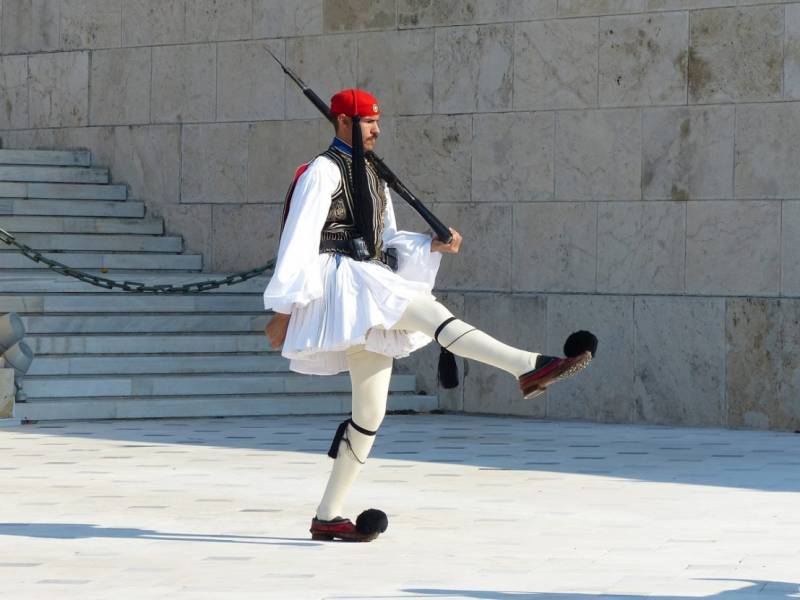 Everything You Wanted to Know about Evzones, the Greek Presidential Guard 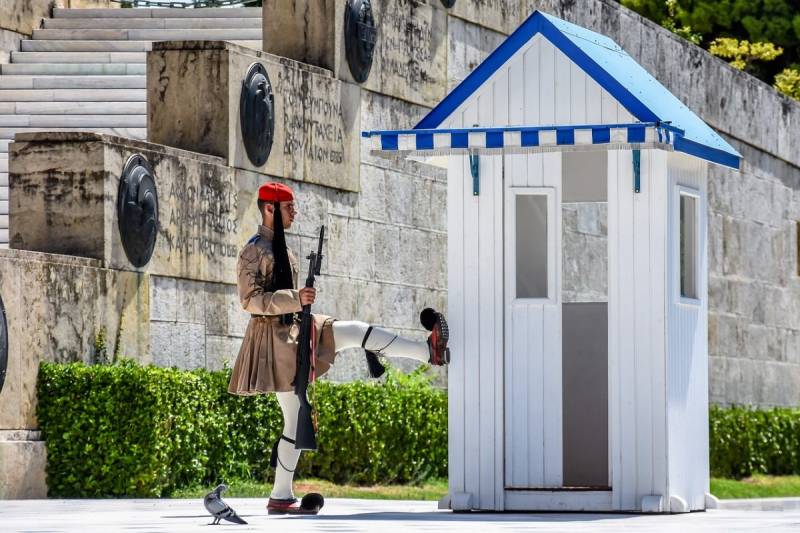 These young Greek soldiers in the skirt-like garment called fustanella and a pair of red leather clogs with black pompoms called tsarouhia have willpower stronger than most people in the world and impeccable health condition. We were very interested to know how does one decide to undergo such a difficult training to become a motionless foot-soldier who works hard to honor those who gave their lives for the freedom of the country, so we interviewed one of them. Petros Stamelos is a Greek soldier, who was an Evzone at first and then became a trainer for everyone who decided to do the same, difficult but honorable job. Keep reading to find out what it takes to become one of the Evzones.

Cultural Places: How did you become Evzone in the first place?

Petros Stamelos: When I was a child, I was admiring Evzones on the Syntagma square, and I really wanted to look like them. They looked so amazing to me. Also, I always wanted to complete their training, which is extremely difficult.

CP: How hard is it to actually become an Evzone? What is required from the candidates before they even try to join?

Petros: It is very difficult to become an Evzone, only about 50% of those who try actually succeed. All Greeks have to serve in the army for nine months, it is an obligation, and the first step to becoming an Evzone. There are a few criteria that you must fulfill. You must be taller than 1,87 meters, it’s important that you are healthy and that you haven’t undergone any kind of surgery, because the routine is very tough and painful for the body. You must be Christian Orthodox, and you mustn’t have any visible tattoos. Those are some of the most important criteria.

CP: What kind of training did you go through when they accepted you and before you actually started?

Petros: To become one of the Evzones, you must complete a very painful training, which lasts 40 days. It’s the most difficult training in the Greek army, both physically and mentally. The most important thing you have to know is this: to become an Evzone, you must desire it very much, and you must be very committed to your goal. When you feel that your body can’t take it anymore, your soul and your willpower are the ones that take over and help you overcome all the problems. This is the only way that you can complete the training. I cannot tell you much about the training itself, we’re not allowed to talk about it, but I’ll give you an example of an exercise. One of the easiest exercises is to stand without moving for 4 hours and more; you shouldn’t even move your eyeballs. You cannot imagine how difficult the exercises can get! But once you’re done with the training, and you become an evzone, you forget all the pain you went through, and you are very proud of yourself. I’m sorry that I can’t give you more insights into the training we go through, but hopefully, you get the idea of what it takes to complete it.

CP: How does a day of an Evzone look like? What is your daily routine as a guard?

Petros: Well, we wake up at 6 o’clock every day, then we prepare our uniforms and other equipment. We shave our faces four times per day, one for each watch duty that we have. We are sleeping only two-three hours because we have so many duties. After we get ready, we are practicing in pairs, for 5 to 6 hours. Everything we do is in pairs — my partner is my mirror, my brother. After this practice, we have our regular watch duty at the Tomb of the Unknown Soldier on Syntagma Square or the Presidential Mansion. Each shift lasts for an hour, and each pair has four shifts during the day — every six hours it’s our turn. 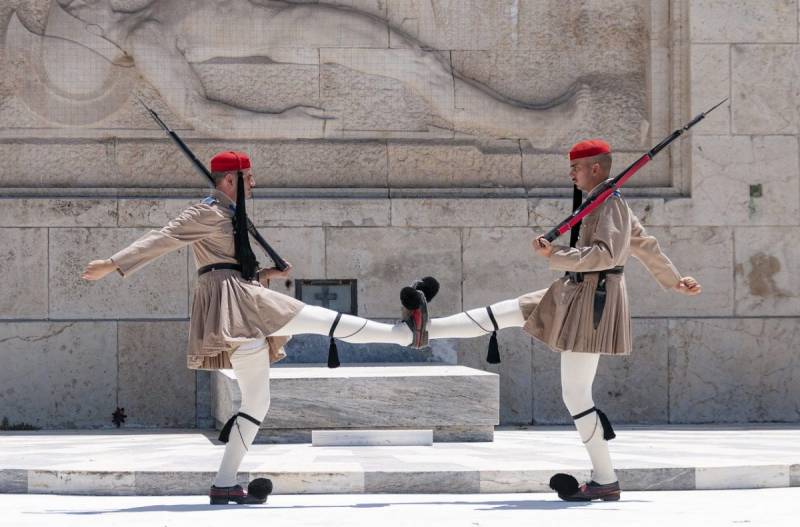 Change of Guards; Our Interviewee Petros on the Left

CP: What happens on Sunday, as opposed to other days? How is routine different?

Petros: Sundays are something special! That is when we wear our official uniforms. At 8 o’clock in the morning, we are raising the Greek flag on Acropolis. At 11 o’clock, we have the official change of guards at the Tomb of the Unknown Soldier, as we do each day, every hour. The difference is that on Sunday at 11 the entire guard comes out to the square and parades to accompany the new guards, who are about to take over the shift from the previous two Evzones.

CP: Could you explain to us a little bit about the moves that Evzones make during the change of guards?

Petros: Yes, every move that an Evzone makes is symbolic and has its meaning. I will explain some of them with the following pictures. 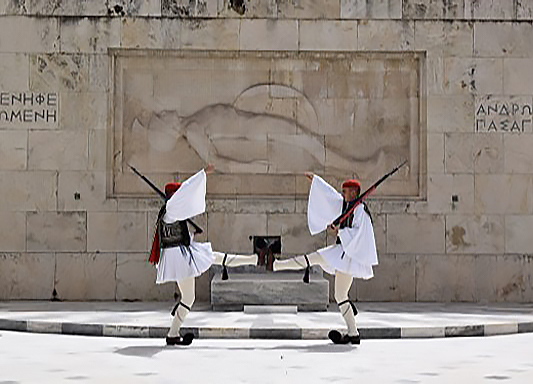 In this photo, Evzones formed the Greek letter “O”, from the Greek word “No” (Greek: “Όχι”) with their arms and legs. 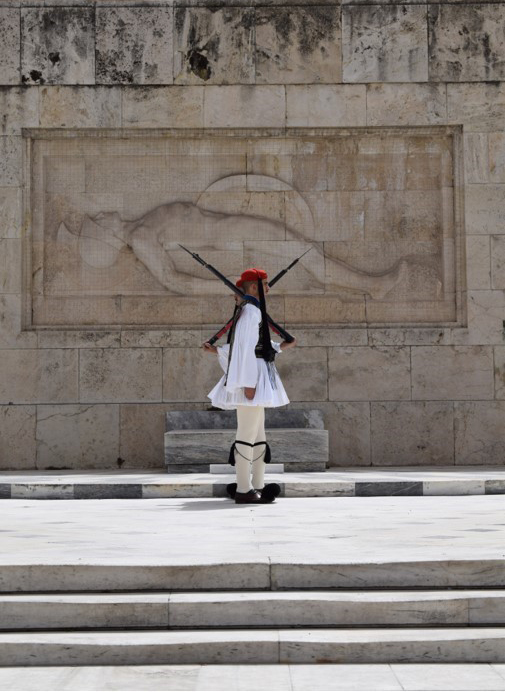 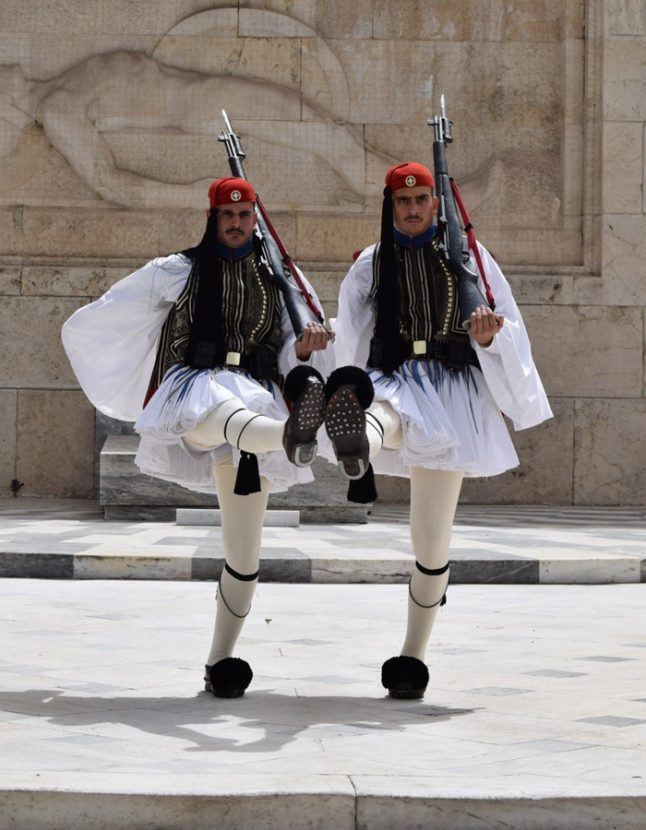 This move symbolizes that Greeks will overcome all the threats only if they are united, that they are stronger together. Or as we say it in Greek “Ισχύς εν τη ενώσει” (“Ischýs en ti enósei”).

CP: Tell us a bit about the uniforms, they look really interesting!

Petros: We have three different uniforms: the winter uniform, which is from Macedonia, the summer uniform, which is from Balkans wars, and the official uniform, the white one that you saw on the pictures above. All uniforms are handmade in a difficult process, and it takes more than six months to complete them. Not every Evzone gets a uniform tailored for him, but we inherit them. Every Evzone who is leaving the guard leaves his uniform for the next Evzone who is joining in. So, each uniform has its history, and when you get to wear that uniform, you become a part of history, too. The uniform becomes a part of you, that’s why we enjoy getting dressed for each watch shift and taking care of our uniforms.

The parts of uniforms symbolize many things. Fustanella of the official white uniform, a kilt-like garment has exactly 400 pleats; each one represents one year under Ottoman occupation. We all wear the red hat phareon, which symbolizes the blood of the dead, and it has a long black tassel which symbolizes the relatives’ tears shed during the war. The waistcoat that we wear, known as femeli, is really something special, and it is full of symbolism, too. On the back, you’ll see the alpha and omega embroidered, as well as crosses representing Christ, and the symbol that represents infinity. This waistcoat is hand-embroidered, and it takes six months to finish it. Besides these most amusing parts of the garment, we also wear a cotton undershirt; white woolen stockings known as periskelides; black-tasseled knee-garters called kaltsodetes, blue and white Cretan fringes; and a leather cartridge belt. On our feet, you’ll see red tsarouchi clogs with black pompoms; each pair is weighing about 3.5 kilos, and each of them has 60 nails in their soles, that helped soldiers overcome the rough terrains. The black pompoms are supposed to keep your feet warm, but some say that they were used to hide some sharp objects in them, to use against enemies. In total, it is a very interesting uniform, full of different symbols, that originate either from religion or the history of the Greek army.

CP: For a side viewer your daily job seems pretty hard. It looks like it requires a lot of concentration. Does it ever get too hard or you get too tired, and if so, how do you deal with that?

Petros: Yeah, you are right. It is a very difficult duty and gets very painful, too. After all exhausting training, we must stand without moving a single muscle for one hour, every six hours — a total of 4 hours per day. We have to be very focused and we must not think about getting tired.

Also, I have to say that Evzones don’t get paid — we do our job to honor all the people who gave their lives for the freedom of our country. So, you can imagine that you have to love this job very much in order to do it.

CP: What is your opinion on this tradition and its future?

Petros: Nowadays, the Evzones’ role is more ceremonial, and the main purpose is to honor those who gave their lives for Greek freedom. Their military service is symbolic. Every move is symbolic. Evzones represent democracy and freedom and are a part of Greek history and religion too. It is very difficult to predict the future; globalization makes all countries look the same. But I believe that the Greeks will keep this tradition because of the history. Evzones are the elite soldiers in the Greek army. For this reason, I think they will exist for many many years.

CP: Do you have any advice for the guys that consider becoming Evzones?

Petros: After being a great evzone, I became a trainer! At the end of their duty, only the best evzones become trainers that teach the new soldiers the ideals and values of this special duty. Only the strong characters can become evzones; if you don’t have a strong character, you can’t complete the training. “The best things in life come from a bit of pain.” “No pain, no gain.” So, if you want to become an evzone, you must give all your heart and soul to it.

Evzones Are a Family

One more thing that we learned is that “brother” Evzones are like family, and honestly, no wonder they are. The two spend years doing everything together, they synchronize their every move, they are like mirrors for each other. It is perfectly natural and wonderful that they develop a relationship like two brothers have.

Now that we know the story behind those stone-like faces, we respect them even more. It is not easy to be an Evzone, but it is something to be very proud of. So, if you do get the chance to visit Athens and to see the guards, remember how difficult their job is, and take a moment to admire them, they surely deserve it.

To learn about more amazing sights to see around Athens, check out our FREE tour guide through this amazing city:

Explore the top 10 things to do in the capital of Greece and be certain you will not only discover its famous ancient landmarks but its hidden gems as well.