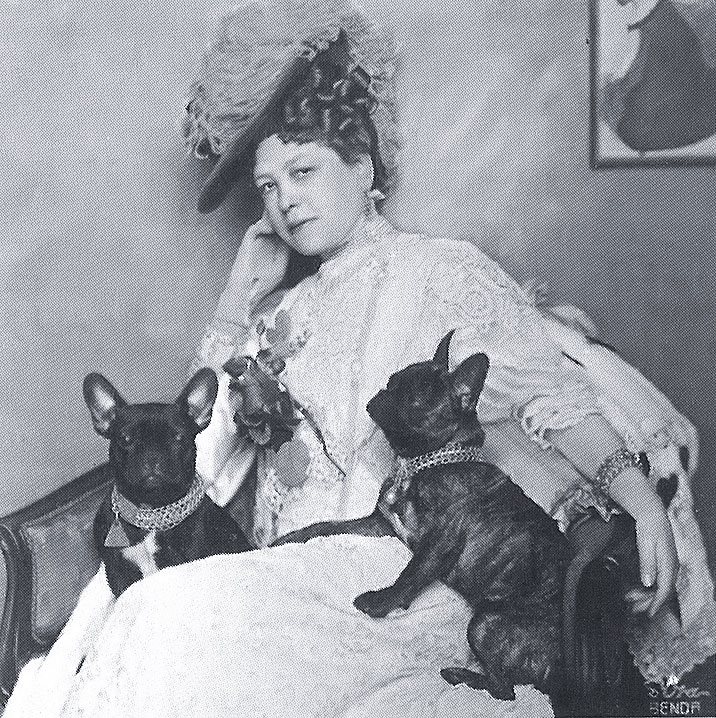 On the occasion of International Women’s Day on March 8th, we would like to introduce you to Anna Sacher, the legendary boss of the Hotel Sacher. After her husband’s early death in 1892, she took over the management – which was anything but a matter of course for the time!

The Legendary Hotel and the Sacher Torte – How It All Began

According to legend, Franz Sacher invented the Sacher Torte as a 16-year-old apprentice in the court of Prince Metternich when the head chef was ill. The chocolate cake with a layer of apricot jam is said to have tasted extremely good to the prince and his guests. In 1848, Franz Sacher opened a delicatessen in Vienna’s first district, where he sold his creation to the public. Needless to say, the Sacher Torte sold very well and became famous!

His son, Eduard Sacher, continued his father’s business and and soon renamed his “Hôtel de l’Opéra” to “Hotel Sacher.” It is located right next to Sacher’s delicatessen and across from the newly built Vienna opera house.

Anna Sacher, née Fuchs, worked in the delicatessen shop and where she met Eduard Sacher. The two married in 1880 when Anna was just 21 years old and Eduard 37. Unfortunately, he died of pneumonia just 12 years later. She knew the company and was already closely involved: organizing parties, taking care of the correspondence, placing advertisements, and assigning the design of the menu cards to various artists. The Sacher was quickly becoming a popular meeting place for upper-class society. When her husband died in 1892, she had no intention of withdrawing from the business – on the contrary!

The Role of Women in Society

At the end of the 19th century, women had significantly fewer rights than men, and it was still a long way to gender equality. It was forbidden for women to organize themselves politically: In 1892, the Austrian Social Democratic Party included the addition “without distinction of sex” in its demand for universal suffrage, but it was not until 1918 that women were allowed to vote.

Women had always worked, especially when it was financially necessary. Their role as mother and housewife was seen as “natural” and placed above everything else. As soon as a woman got married, she was expected to have children and to look after them – the husband was the breadwinner of the family and, if possible, the sole breadwinner as well.

It took a long time for this to change. Nevertheless, there were always women who defied traditional roles and fought for their freedom.

A Woman As A Hotel Manager?

A woman as the head of a large, famous hotel and restaurant? That didn’t fit in with the times at all. At the end of the 19th century, it was not customary for women to be granted a license to run such a company – however, Anna Sacher was one of the first women to get it, and from 1895 she was the sole owner and manager of the hotel. After that, her guiding principle was “I am the master of the house!”

Anna Sacher was a charismatic, loud, and conspicuous woman who did not shy away from making demands. It is said that Crown Prince Rudolf liked to come to the Sacher often and with pleasure – he almost never paid and ate and drank on credit. Allegedly, Anna Sacher charged his relatives after his suicide in Mayerling and demanded the silverware when no payment was made. If it’s not true, it’s at least well invented – in fact, the Hotel Sacher still owns pieces from Mayerling Castle.

Anna Sacher was certainly an interesting woman who often resisted typical gender roles; for example, she preferred to smoke cigars – scandalous! But she not only broke with traditional roles, often not behaving as society would expect, she also helped her female guests to enjoy unusual freedoms. Around 1900, women were not allowed to go to the coffee house alone; it was considered absolutely improper. That’s why Anna Sacher opened her own women’s salons or separées, in which women could withdraw without everyone knowing about their visits to the coffee house. Even shopping alone was frowned upon – so Anna Sacher set up a secret underground passage through which women could get directly from the hotel to the traditional “Wilhelm Jungmann & Neffe’’ store and stock up on the latest fabrics, hidden from all eyes. However, these freedoms were only possible for upper-class women!

Fortunately, a lot has changed since then, and women can decide for themselves whether they go to work and what they do with their income; they can vote, be elected, and much more. Even if this sounds natural to us today, we shouldn’t forget that those changes happened not so long ago – only since 1975 have women in Austria been allowed to work without their husbands’ permission. In Germany and Austria, women have had the right to vote since 1918, but in Switzerland, it even took longer: most cantons did not introduce women’s suffrage until 1971, and it took the canton of Appenzell Innerrhoden until April 1990!

As a woman in a management position, Anna Sacher was an absolute exception at the time – but even today, significantly fewer companies are managed by women than men. On average, in the EU, 34.7% of management positions were held by women in 2019; in Austria and Germany the numbers are a bit lower. Even if women and men are legally equal, there are many other factors that can lead to disadvantage. For example, fewer women than men are employed in all EU Member States. They also earn less than their male coworkers – even if you take into account that more women than men work part-time.

International Women’s Day was first celebrated in Germany in 1911. The main topic in the first few years was women’s suffrage; since then, attention has been drawn to issues such as equal pay, abortion, and sexual abuse. It was banned when the Nazis came into power, however as part of the second wave of the women’s movement, it came back into focus in the 1960s.

Even if Anna Sacher was never politically active, she showed that women could be strong, self-confident, and also successful in management positions. She would surely be delighted with the opportunities women have in Europe today!

PS: We will soon have news about Anna Sacher and her hotel – but we won’t reveal more just yet, so stay tuned!