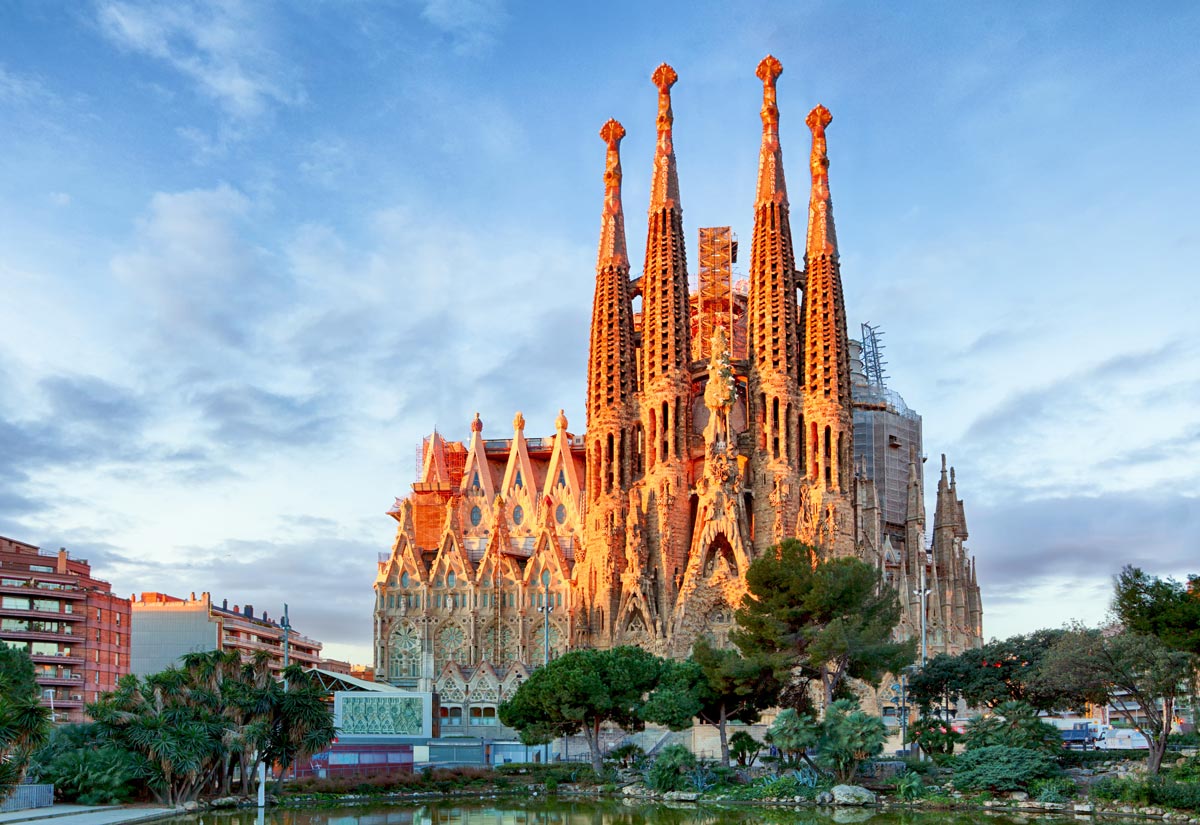 La Sagrada Familia is an extraordinary religious building located in the gorgeous city of Barcelona, one of the most visited tourist attractions in Spain, and, of course, a UNESCO World Heritage Site. You’ve seen its pictures so many times, or even admired it in person, but how much do you really know about this Catalan gem? Let’s learn some interesting facts about Gaudí’s Masterpiece.

1. Gaudí Is Not the One Who Started It All

Even though La Sagrada Familia is Gaudí’s masterpiece, he’s not the one who started this project. Jose Maria Bocabella, a Spanish bookseller and philanthropist, was amazed by one church in Italy and wanted the similar one built in Spain. He funded the project that was going to be executed by the architect Francisco Paula del Villar. After many disagreements with the construction board, Villar retired from this project and Gaudí took over. He completely changed the plans and gave La Sagrada Familia its unique look. If it wasn’t for him, this masterpiece would be yet another Gothic Revival church.

2. It’s Been under Construction for More Than a Century

La Sagrada Familia is Gaudí’s most famous work which still stands unfinished. The construction started in 1882 and when Gaudí died in 1926, only about a quarter of this landmark was finished. It has been under construction for the last 138 years, and it is believed that it is now in its final stage. The building should be finished in 2026 which will mean that it took 144 years to complete it. It’s quite a long time, don’t you think? For instance, it is said that the construction of the Great Pyramid of Giza lasted for about 20 years and it seems like a huge project!

3. One School Was a Part of La Sagrada Familia

Gaudí was a very special man in many ways — he was so thoughtful. When he took over this project, he decided to build a school on the construction site. It was built for the children of the construction workers to attended it while their fathers work on this magnificent religious building. Also, other children from the neighborhood could attend this school, especially the ones from the underprivileged classes. The school was built in 1909 and nowadays it’s an educational area of the Museum of the Sagrada Familia.

This marvelous building combines several architectural styles. As we already mentioned, the whole idea for making this extraordinary building came from another man, and the construction was started by another architect, who envisioned it to be a Gothic Revival church. So, that’s where its Gothic elements came from. When Gaudí took over, he changed the plan completely and brought in a variety of Catalan Modernism and Art Nouveau elements, that make La Sagrada Familia so special.

If you’re interested to read a bit more about Gaudí’s architectural work, we recommend you check out one of our blog posts: “Gaudí’s Barcelona: 10 Most Interesting Buildings in Barcelona”

The main inspiration for this construction was the nature and variety of shapes that can be found in it. This might seem a little bit unusual since most of the religious buildings you’ve seen have straight lines, but Gaudí believed that all manmade structures should resemble nature as much as possible. This is especially notable inside La Sagrada Familia, where you will find many tree-like columns and various creatures from our natural surroundings placed all around the place.

6. Its Façades Are Works of Art

There are three main façades on La Sagrada Familia and they are all stunning! The most important one might be the Nativity Façade (the one on the East) and that was the only one constructed under Gaudí’s watch. It was the first façade that was completed; it is dedicated to the birth of Jesus, and it is very ornated and detailed. As Gaudí was aware that he won’t live long enough to finish the building, it was important to him to do this façade and set the style of the whole building. Also, he left specific instructions for the other two façades.

The Passion Façade, or the West Façade, is pretty plain and simple, and it represents the contrast to the detailed Nativity Façade. This façade is dedicated to the passion of Jesus and his suffering, and it was intended to represent the sins of man.

The Glory Façade, or the South Façade, is still under construction and it is the largest one of the three. It will be the main façade, as it will offer access to the central part of the church. It is dedicated to the Celestial Glory of Jesus, and it represents the road to God: Death, Final Judgment, and Glory, while Hell is left for those who deviate from God’s will.

After Gaudí died in 1926, he was buried in the tomb of La Sagrada Familia. His tomb is located in the underground crypt, in the chapel dedicated to the Virgin of El Carmen. Gaudí is not the only one buried in La Sagrada Familia — it also holds the remains of Bocabella, the man who started this whole project.

Let’s be more precise — it’s not a cathedral anymore. When the construction of this religious building first started, it was supposed to be a simple Roman Catholic church. Along the way, it was designated as a cathedral — a seat of a bishop. In 2010, Benedict XVI declared it a basilica — which is quite honorable. The basilica is an important religious building that carries special spiritual, historical, and architectural significance. It’s the highest permanent designation of a religious building and cannot be taken back.

At the moment La Sagrada Familia has only eight towers completed, but once it’s finished, it will have 18 towers in total. Twelve of those represent the apostles and they are set in groups of four — one group on each façade. The rest of the towers are closer to the middle of the building. Four of them represent evangelists, one will be dedicated to the Virgin Mary, and the one in the middle, which will also be the tallest one, will represent Jesus Christ.

10. It Will Be the Tallest Religious Building in Europe

When La Sagrada Familia is finished, it will be 172,5 meters tall, which will be the hight of its tallest tower. This hight will make La Sagrada Familia the tallest religious building in Europe. Gaudí put a lot of thought into the hight of the construction. He decided it should be one meter shorter than the nearby Montjuic Mountain. The reason for this is that he thought it was improper for a man’s work to surpass the work of God.

Don’t you agree that this is one magnificent landmark? The architecture is just amazing as well as the story behind it.

We have one bonus fact for you: The project of constructing La Sagrada Familia is funded by donors and YOU! Visitors do mean so much to this basilica, so if you find yourself in Barcelona at any time, be sure to visit and support the project. You will enjoy all the details of this architectural jewel.

If you love interesting stories and symbolism hidden in the façades of the famous religious buildings, you should definitely check out St. Stephen’s Cathedral in Vienna (Stephansdom). On our Cultural Places platform, you can find an audio guide that will explain to you the secrets of this symbol of Vienna, don’t miss it!