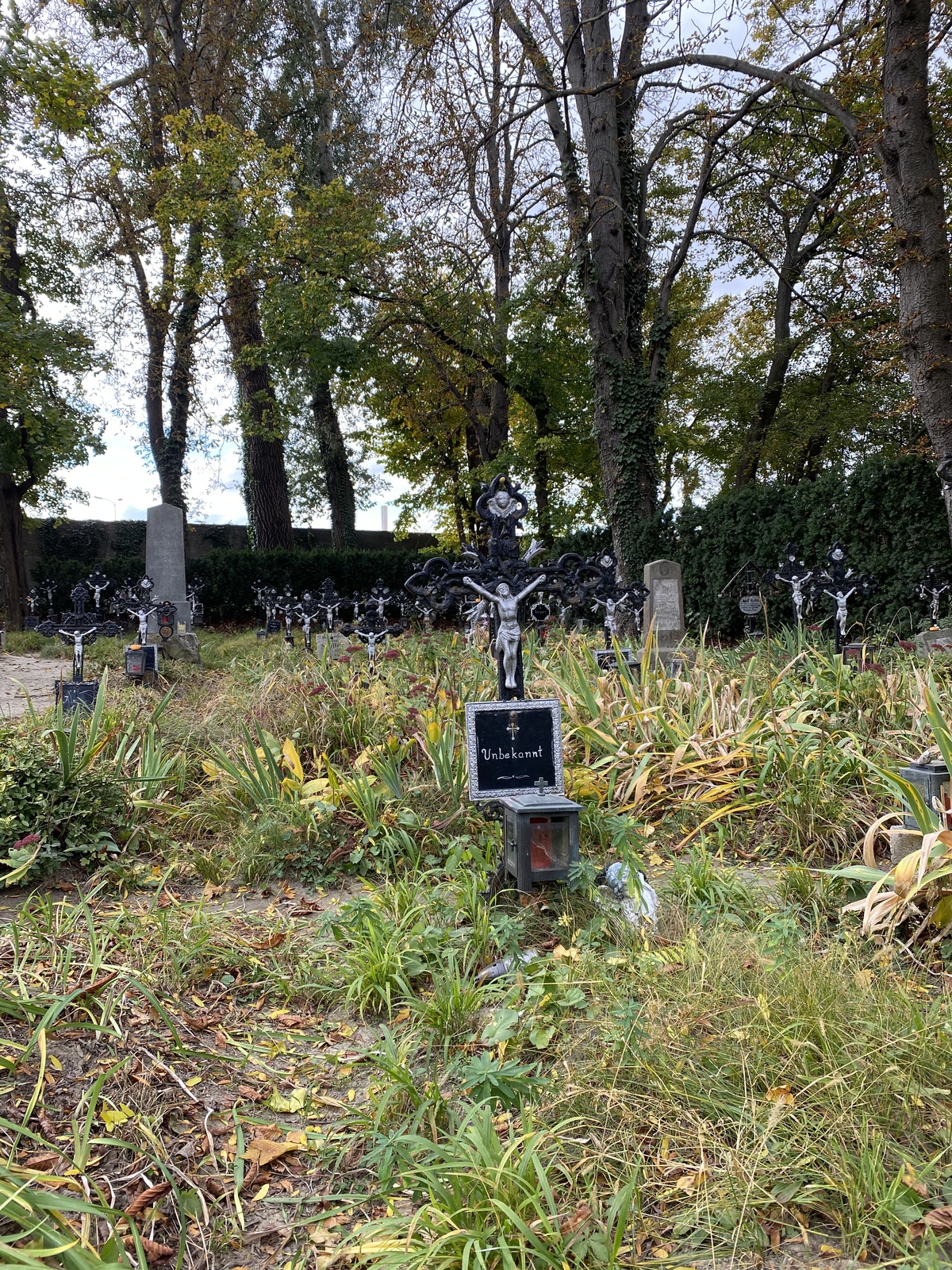 It is undeniable that fall has arrived in Vienna. The days are getting shorter and darker, the light gets gloomier and the morning mist covers the city in a magical twilight. We wanted to seize this unique late fall atmosphere and decided to explore some mystical places in Vienna you might not have visited before. As diverse as the places are, what they have in common is their unique, and sometimes even spooky atmosphere. So, follow us on our little tour and see Vienna through a whole different lens today, away from the usual tourist destinations.

We start our little tour in the inner city at the famous St. Stephen’s Cathedral. The tourist magnet is known for its stunning gothic architecture, but do you also know what’s underneath its surface?
Right beneath the southern aisle, close to the Altar of the church, you find the Viennese Catacombs. The Catacombs are basically a huge underground graveyard. Sounds kind of scary, right? Let’s take a closer look at the set-up of the Catacombs. Once you walk down the staircase, you reach the first part of the Catacombs, the “Kaisergruft” (imperial crypt). Here, the remains of the imperial Habsburg family were buried. But not their full corpses though, only their insides and organs that are still kept in marbles vessels here until this day. The remains of their corpses were buried in the “Kapuzinergruft”. This method was used to help to better preserve the corpses.

After the imperial crypt, you pass two other crypts where cardinals and bishops were buried. Unlike the Habsburger, their full bodies were buried behind marble slabs.  However, the spookiest part of the Catacombs is still yet to come. Now you are reaching the “Neue Grüfte” (new crypts), which were established around 1744. They consist of 30 burial chambers and stretch over two floors. Their full size covers the whole area of Stephansplatz.

Back then, the corpses were just thrown into the crypt and stacked on top of each other. When one chamber was full, it got bricked up and another chamber was created. As this could take a while, numerous corpses were already decaying by then. Rumor has it that St. Stephen’s Cathedral had even been closed due to the horrible smell of rotten bodies one day. In 1783, the burials in the Catacombs were finally forbidden. Until then, more than 10.000 people got buried there.

You can still visit a part of the Catacombs today. Take a tour into these gruesome surroundings and you will even see some of the remaining bones stacked up in the chambers. 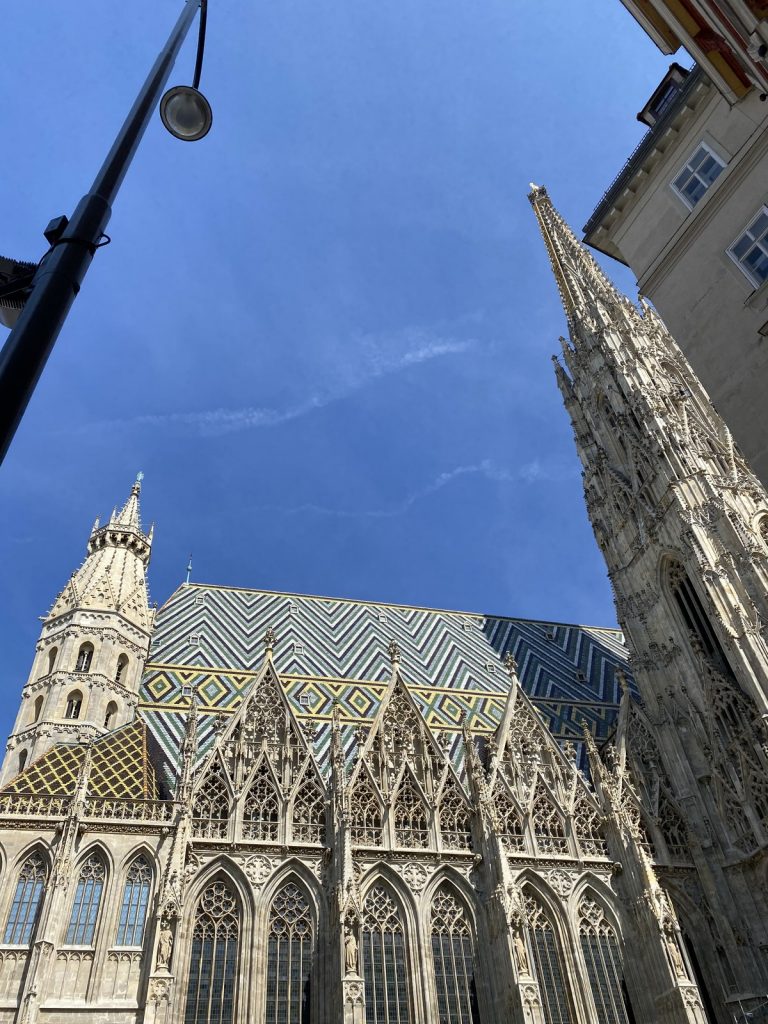 Did you know what is hidden beneath St. Stephen’s Cathedral?

In close proximity to the Catacombs and still in the first district, you find a narrow street with the uncanny name “Blutgasse” (Blood Street). Where the name of the street derives from, is not entirely known and backed up with evidence. There are two legends though that try to shed light on the history of origins. One says that there was a slaughterhouse in this street in the middle ages from which the blood was led through gutters into the alley. Another one says that French temple knights were murdered here in 1312 and the whole street was soaked with their blood. Whatever the real reason might be, the street still has a mystical vibe until this day. 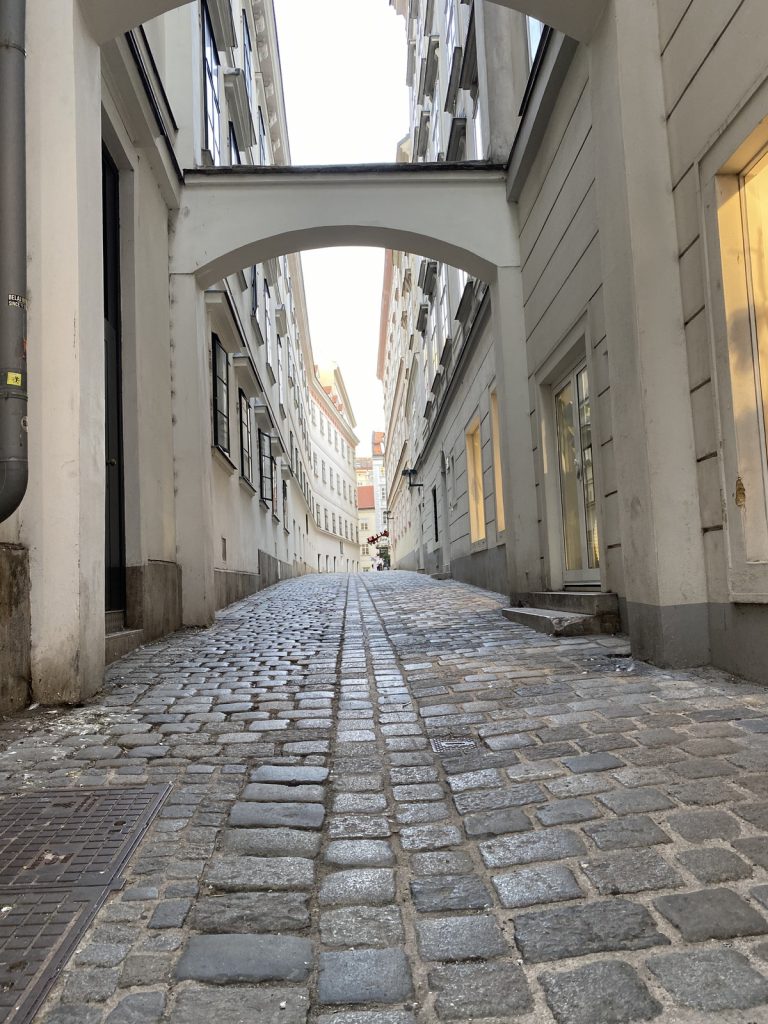 There are several myths, how Blutgasse (Blood Street) got its name.

Cemetery of the Nameless

We are leaving the inner city now and visit a mystical place on the outskirts of Vienna close to Alberner Harbour, the Cemetery of the Nameless. Located at the banks of the river Danube, it was a place were a total of 478 dead bodies of drowned people were washed ashore between 1840 and 1900. The names of the people were not known, and their remains were often disfigured beyond recognition. With the means of forensic medicine at that time, identification was no longer possible, so they were buried here without much effort. As this initial part of the cemetery was regularly flooded, a new part of the cemetery was opened in 1900. The bodies that were washed ashore after 1900 were buried here. 104 bodies were buried here between 1900 and 1940. Unknown”  or “Nameless” is written on the simple crosses on their graves. Only a few graves provide information about the cause of death. For example, “Bicycle accident” or “Drowned by foreign hand”.

A particularly tragic story is the death of a little child, that was washed ashore in a shoebox. Josef Fuchs, who took care of the cemetery on a voluntary basis back then, buried the boy and wrote the name “Sepperl” on the grave that can still be visited today. In 1940, the last funeral took place at the Cemetery of the Nameless, as the water vortex, that washed the corpses ashore, changed due to a restructuring of the harbor, and the cemetery was closed. 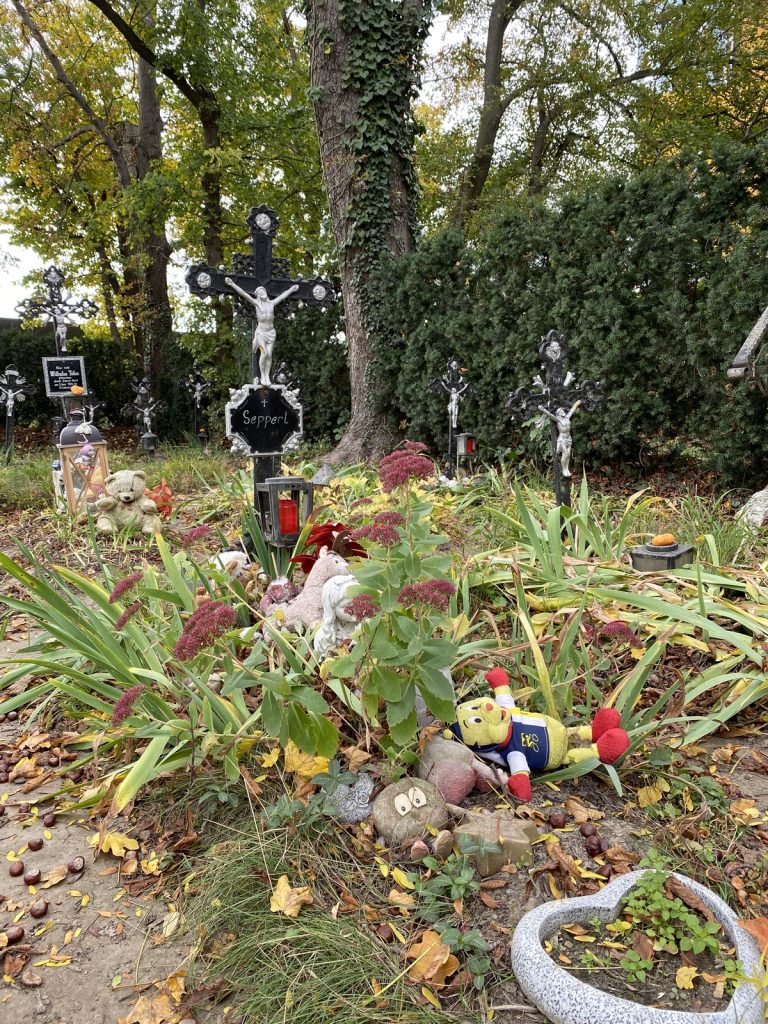 The dead body of a little child that was later named “Sepperl”, was washed ashore in a shoebox.

Today, the cemetery is a mystical and calm place, framed idyllically by large trees, and reminds visitors of the vanity of life and the deadly powers water can have.

Every first Sunday after All Saints’ Day, a small raft is put into the Danube by the Danube fishermen, decorated with candles and with the inscription: “To the victims of the Danube”. 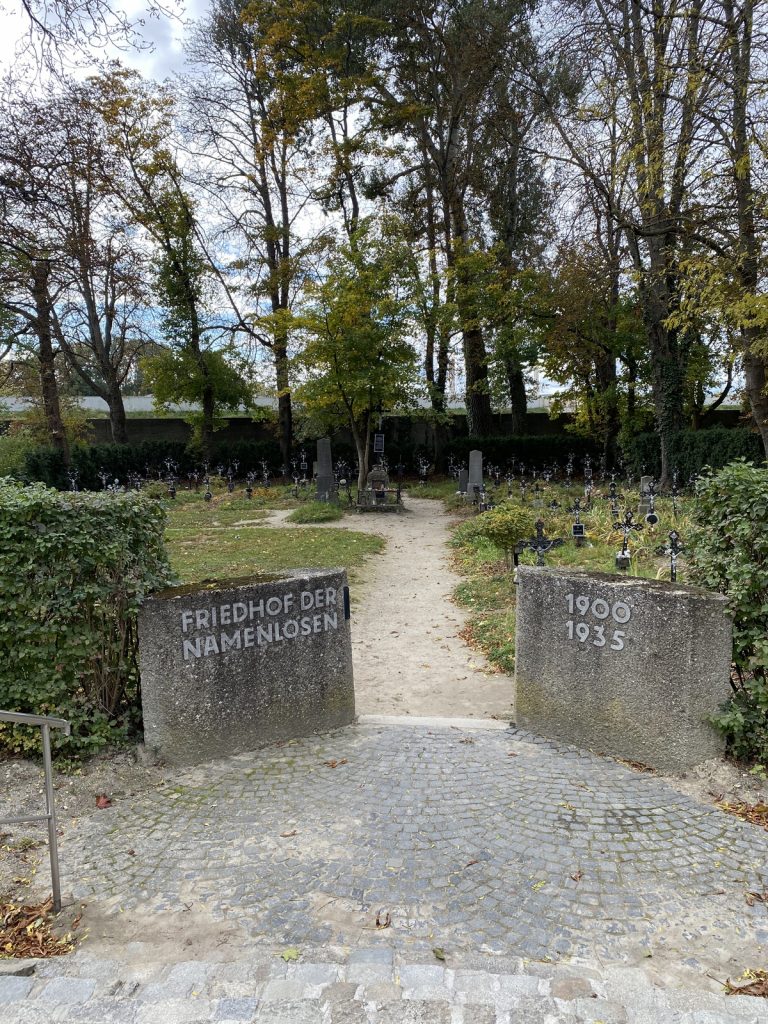 The Cemetery of the Nameless is the final resting place for unknown victims of the Danube.

Going back to the inner city, our tour to mystical places in Vienna wouldn’t be complete without a stop at Vienna’s largest and most famous cemetery, the Vienna Central Cemetery.

When you walk through one of the big gates, you are immediately immersed in a different world. With a size of around 2 square kilometers, the Vienna Central Cemetery is the second-largest cemetery in Europe. Opened in 1874, its huge area resembles a park, and it is also used by Viennese people as a recreational area for jogging, talking walks, cycling, etc. There are even wild animals living there! So, beware, you might not encounter ghosts, but deer, squirrels, or martens. 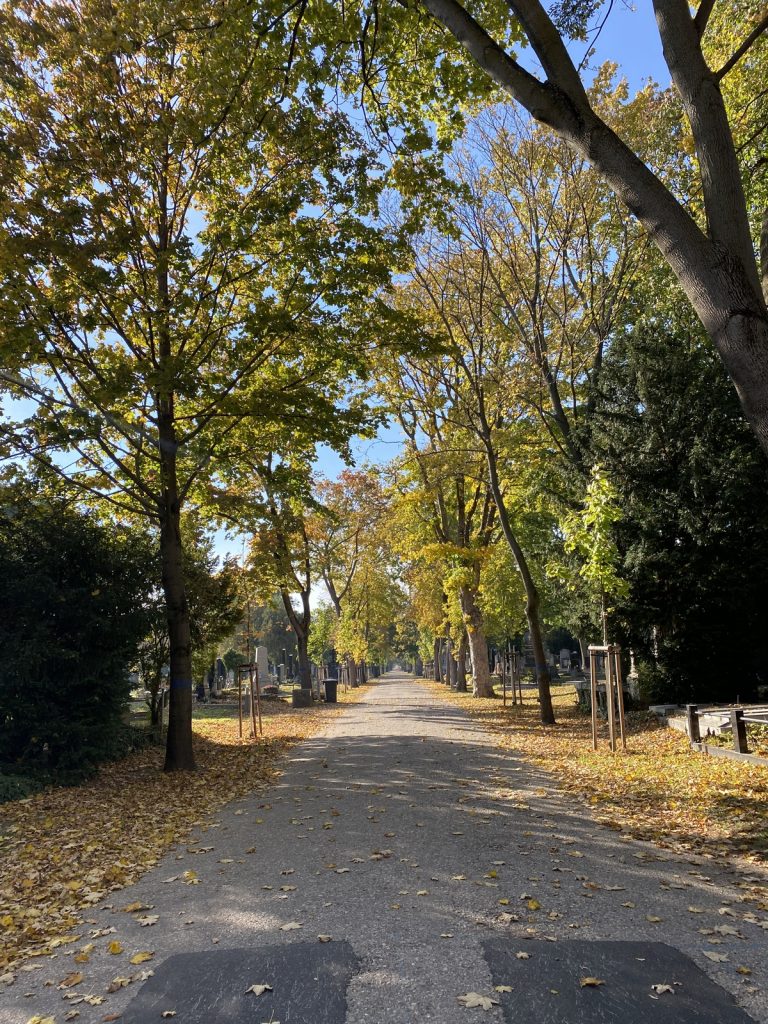 The vast area of the Central Cemetery resembles a huge park and is visited by many people also for recreational activities such as jogging.

Hosting more than 330.000 graves, the Central Cemetery is also the final resting place for many famous personalities.  You don’t only find graves of honor by famous composers such as Ludwig van Beethoven, Schubert or Johann Strauss there, but also by contemporary musicians such as Udo Jürgens, jazz pianist Joe Zawinul or Falco. 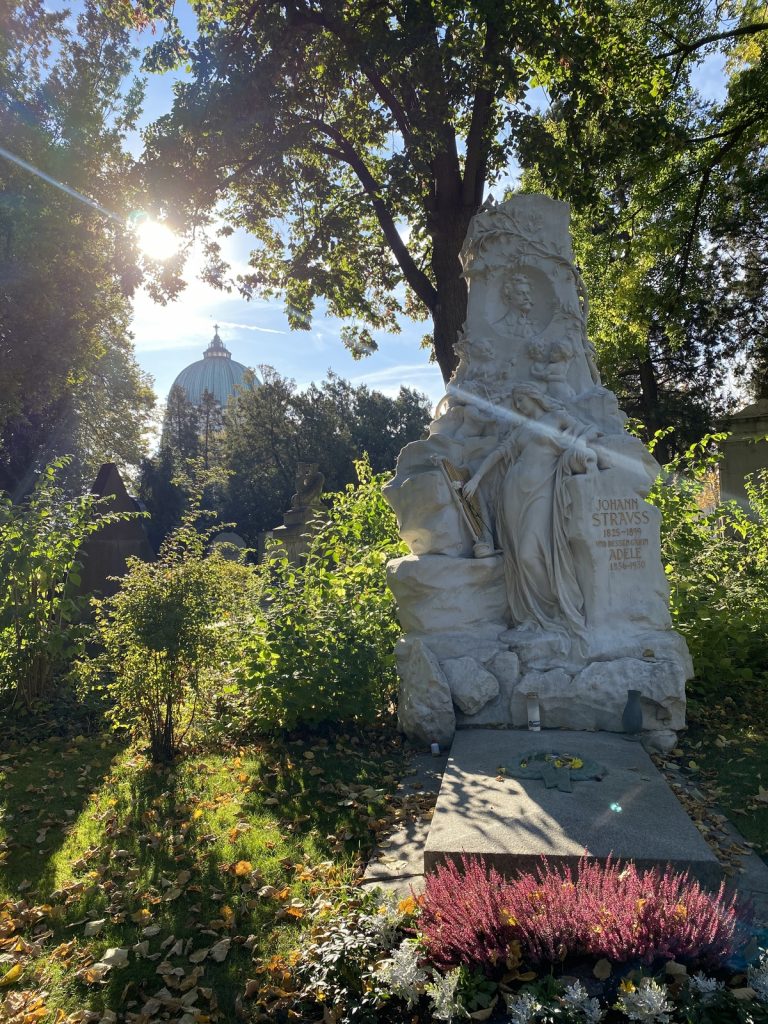 You find the graves of many famous personalities there, such as Johann Strauss. 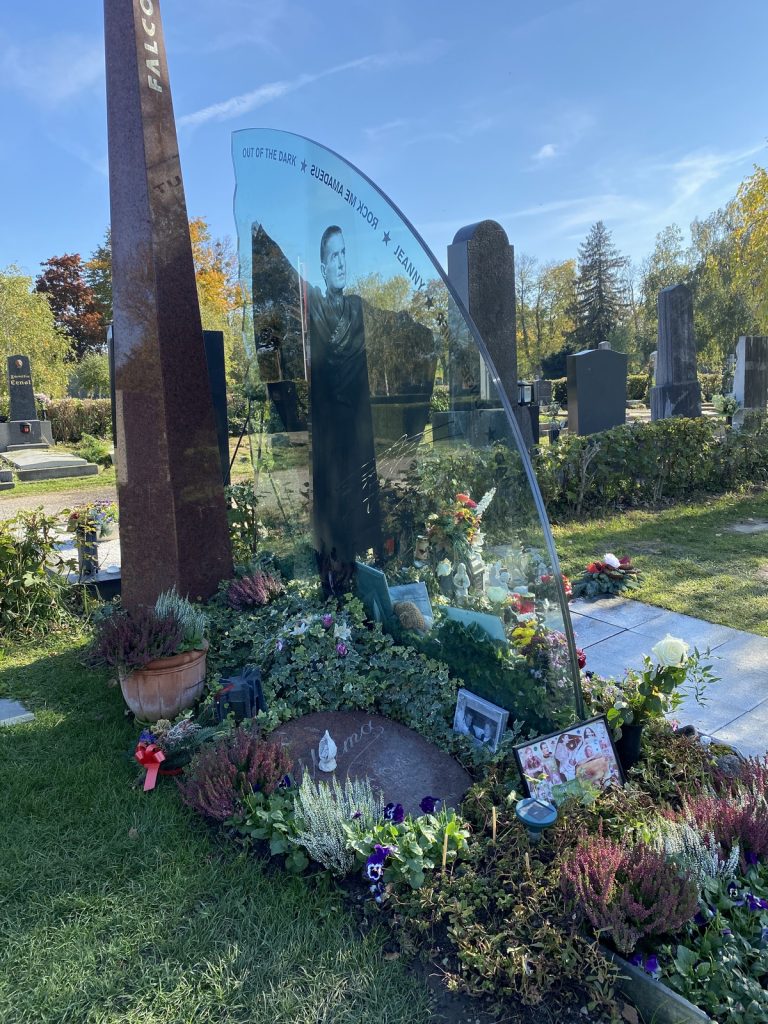 Falco’s grave is a pilgrimage site for fans worldwide.

If you want to know more about famous Viennese musicians, we highly recommend checking out our “A Music Lover’s Guide to Vienna” which leads you on the tracks of popular Viennese composers.

When wanting to visit any of those mentioned graves, we highly recommend checking out the site plan of the cemetery beforehand, as you otherwise might get lost in this green and mystical oasis.

Once you are there, you should also pay a visit to the cemetery church of St. Karl Borromäus, which definitely belongs to the most beautiful Art Nouveau churches in Vienna.

If you are looking for more places where to enjoy fall, check out our blog post about magical and enchanted fall walks in Vienna.