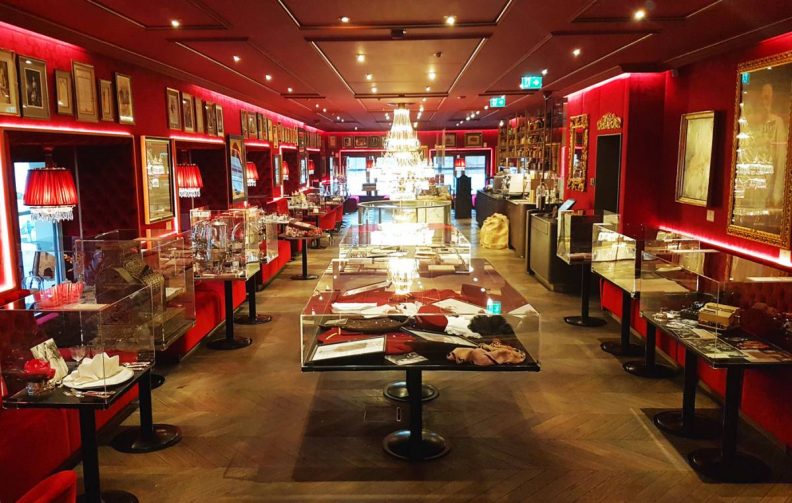 Finally, the time has come! The Hotel Sacher opened the gates to its pop-up experience on June 2nd, 2021. You can see exhibits on the history of the hotel, and the audio guide from Cultural Places tells its story from the perspective of Anna Sacher, the long-time boss.

The legendary Hotel Sacher is celebrating its 145th birthday this year. The well-known Viennese institution is internationally famous – but how did it come about? And who invented the Original Sacher-Torte, the delicious chocolate cake with a layer of apricot jam? We’ll give you a first glimpse into the new exhibition and the history of this Viennese institution!

An Exhibition on Vienna’s Legendary Institution

The Sacher has come up with a lot since the corona pandemic began – a drive-through, a delivery service, and an exhibition located on the first floor of the cozy Sacher Eck, where you can usually stop for a coffee and a sweet treat. There are historical objects of all kinds on temporary display, such as old menus, waiters’ uniforms from past decades, and fine silverware and glasses, as well as countless pictures and photos from yesteryear, and much more! An extra room is dedicated to cocoa and the production of the Original Sacher-Torte. A historic hotel room with original furnishings is also on display, as is the antique breakfast cart for children. This way you can see exhibits that are usually not accessible and learn everything about the history of the hotel and, of course, about the Original Sacher-Torte.

The Original Sacher-Torte and How it All Began

There are many secrets about the Original Sacher-Torte and the Hotel Sacher, but the story surrounding the cake’s invention has been passed down with relative certainty. Franz Sacher, Eduard Sacher’s father, was once an apprentice at Price Metternich’s court. The story goes that one day in 1832 the head chef was sick, but Prince Metternich wanted a dessert for himself and his high-ranking guests – and so Franz, who was only 16 years old, created the cake which later became known as the Original Sacher-Torte. However, the Viennese specialty which is so famous today was only developed and sold later. In 1848, Franz Sacher returned to Vienna after stays in Budapest and Bratislava and opened a delicatessen. From then on, the story took its course: the shop and the “Franz Sacher chocolate cake” enjoyed great popularity.

There are countless chocolate cakes that are called Sacher Torte and they certainly don’t taste bad – but the original ones are only available from Sacher! After a long legal dispute in 1963, Sacher and Demel agreed that only the cakes from Sacher could bear the name “Original Sacher-Torte”, and those from Demel took the name “Eduard Sacher-Torte’’. There was not only a debate about the name, but also, among other things, whether the cake should be sliced horizontally and coated with another layer of jam. The writer Friedrich Torberg was a regular guest at both Sacher and Demel, and he even testified that in Anna Sacher’s time it was never sliced and only covered with jam under the glaze. Pretty complicated!

Eduard, the son of Franz Sacher, followed in his father’s footsteps and trained as a restaurateur. He ran several inns in Vienna, opened a bar in Vienna’s Kärntner Strasse where he set up Parisian-style ‘’chambres séparées’’, and in 1876 built today’s Hotel Sacher which was initially called the ‘’Hôtel de l’Opéra’’. The Kärntnertortheater used to stand here, and thanks to its close proximity to the opera, the new hotel was sure to have exquisite guests. With its good location, the high-quality orientation and, last but not least, the chambres séparées, it became one of the most popular meeting places in Vienna for aristocrats, artists, and politicians. This is still valid: high-ranking politicians and personalities from all over the world, from Kofi Annan to Justin Bieber, have stayed at the Hotel Sacher.

The audio guide implemented by Cultural Places is included in the entrance fee and tells the story of the hotel from the perspective of Anna Sacher, the legendary boss of the hotel. She married Eduard Sacher 4 years after the hotel opened and took on important tasks right from the start: Anna organized parties, took care of the correspondence, placed advertisements, and commissioned various artists to design the menu cards. The Sacher quickly developed into a popular meeting place for upper class society. Twelve years later, in 1892, her husband died – but Anna Sacher didn’t even think about withdrawing from the business – on the contrary! For women, running a hotel was not a matter of course at that time, it was actually almost impossible. In fact, Anna Sacher was probably one of the first women in Europe to be given such a responsibility. From 1895 she was the sole owner and manager of the hotel, and her motto was “I am the master of the house!”. In general, Anna Sacher was probably a very charismatic and interesting person who made the Sacher a famous meeting place. Old photographs often show her with her French bulldogs, also known as “Sacher-Bullys”, or smoking a cigar – at the time quite scandalous for a woman!

Even today, the Sacher is a family-run hotel and is all about tradition – although not only sticking to the past, but always looking for modern approaches and creative solutions. The Sacher collection consists not only of the hotel in Vienna, but also includes the Hotel Sacher Salzburg and coffee houses in Vienna, Salzburg, Graz, and Innsbruck. It belongs to the Leading Hotels of the World and is run by Alexandra Winkler and her brother Georg Gürtler.

See You Soon at the Sacher!

We hope you got an exciting impression of the Sacher universe and look forward to a visit to the Sacher Pop-up Welt. Tickets and the audio guide are available at www.culturalplaces.com. The exhibition can only be seen until the end of June, so don’t miss this unique opportunity and get your tickets right away! Taking into account the sanitary rules for events in Austria (proof of being tested, vaccinated, or recovered from COVID-19), you can view the Sacher Pop-up Welt daily from 10 a.m. to 6 p.m.

If you cannot visit the exhibition, you can still enjoy the digital media guide from home. With it you will not only learn more about the Hotel Sacher Wien, but also get a good insight with around 200 photos.

Have fun and see you soon at the Sacher! 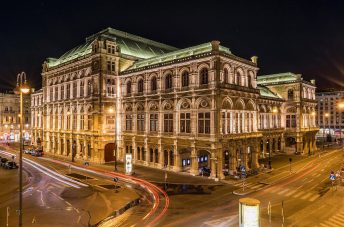 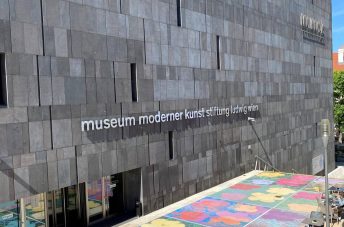 Experience the mumok in Vienna!

Don't miss out on the free admission to @mumok_vie

Spot on Carinthia! 🤩 Today we are visiting the

Santorini is so dreamy! 😍🇬🇷 We can't dec

Don't forget to visit the Sacher Pop-up Welt in Vi

Vienna has so much to offer and its architecture i

Summer also seems to have finally arrived in Swede

Spot on Innsbruck! 🤩 Today, we are visiting the

Don't miss the opportunity to visit the Sacher Pop

Welcome! 😍 Starting as of today, you can finall

We are beyond excited to announce that we have tea

Let's start this new week with another episode of

Have you ever been to vivid @mqwien? 🤔 To make

Last week, we’ve visited a city that is famous f

Spot on Linz! 😍 Today, we are visiting Linz, th

What is the first city that comes to your mind whe

Today, we want to put you, our community, into the