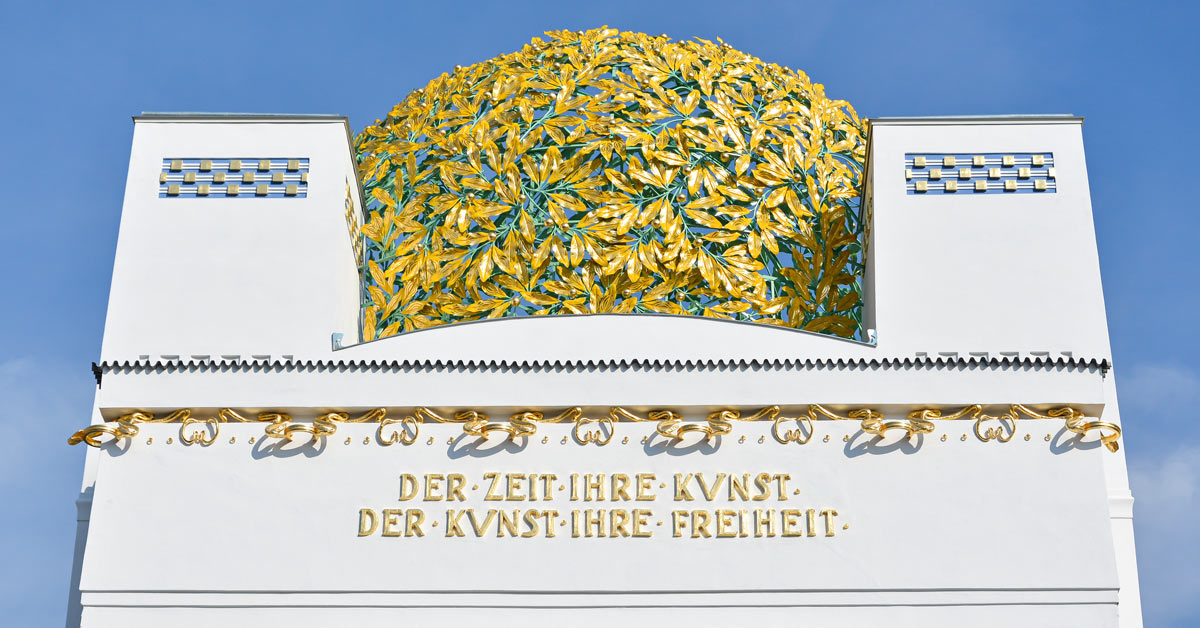 The Secession emerged from an artists’ movement at the end of the 19th century by a group who split off from the conservative Künstlerhaus. Read on to find out how Gustav Klimt, Koloman Moser, Hermann Bahr, and many others revolutionized the art scene and what the Secession is all about today.

The Spirit of Optimism at the End of the 19th Century

At the end of the 19th century several new art movements broke down conservative attitudes and created forms of art that have never been seen before. Not only art but also the natural sciences and humanities celebrated successes and broke new ground – for example, Sigmund Freud with his unprecedented investigations of the psyche. While Austria was still a Habsburg monarchy and the First World War was a long way off, a spirit of optimism spread among the intellectual classes.

Alongside the Wiener Werkstätte, the Secession artists’ association was formative for Art Nouveau in Vienna. It was founded in 1897 and was able to open a new, sensational exhibition building as early as October 29, 1898.

The new digital walk about the history of the Secession (only available in German!) will tell you everything about the emergence of this progressive art movement. We’ll give a little bit away right here:

The digital guide takes you through the immediate surroundings of the Secession building to a total of seven stations. Its outstanding significance is explained in comparison with other buildings, and visualizes connections between art movements and their practitioners. For example, the nearby Künstlerhaus with its historicist architecture, from whose movement the Secessionists emerged (and turned away). At Karlsplatz and Naschmarkt, you can find the Otto Wagner Pavilions – Joseph Maria Olbrich was a student of Otto Wagner and designed the pavilions’ floral ornaments.

The Sensational Building with the Golden Dome

When the Secessionists turned away from the conservative orientation of the Künstlerhaus they also needed their own exhibition house, and Joseph Maria Olbrich was commissioned with the planning. The k. u. k. Reichs-Kriegsministerium (Imperial and Royal War Ministry) rejected the original construction site in the 1st district. An alternative site was found at Karlsplatz, where the Secession still stands today – despite the original plans to tear it down after several years. In just a few months, a building was erected that caused a great sensation: the unusual architecture, especially the dome made of golden leaves, divided the population. Today, the Secession is still eye-catching, and the initially presumably negative designation “Krauthappel” (which could roughly be translated as cabbage’s head) is now used affectionately by the Viennese.

The guide ends with the opening of the Secession, which took place just a few months after construction began. The white cube is decorated with numerous ornaments, including the Secession’s motto: “Der Zeit ihre Kunst, der Kunst ihre Freiheit” (To each era its art. To art its freedom), which is still valid today.

If you have arrived at the Secession, you can hopefully step inside and see the Beethoven Frieze by Gustav Klimt and/or one of the temporary exhibitions of exciting contemporary artists. The digital audio guide Tour through the Vienna Secession will lead you through the building and its history; it is also included in the entrance fee. If museums still remain closed or have to be closed again, you can visit the Secession virtually this way! As a foretaste, we’ll tell you a bit about what awaits you:

Gustav Klimt is perhaps the most famous founding father of the Secession (unfortunately, there were no women). In 1902, the XIV Exhibition of the Association of Visual Artists Vienna Secession was dedicated to Beethoven, and a “Gesamtkunstwerk” was to be created (the interplay of artworks from different disciplines in combination with the premises should have an effect in its entirety). Part of it was the Beethoven Frieze by Gustav Klimt, which fortunately was not destroyed after the exhibition as planned, and it survived numerous changes of ownership. Since 1986 it has had its own room in the basement of the Secession, where perfect conditions help conserve the frieze as long as possible.

We have already learned a bit about the history of the building, but the guide provides more detail on the architecture and the imaginative ornamentation. Numerous decorations adorn the building, most notably the three gorgons above the main entrance. It’s worth walking around the Secession and discovering all the different decorations, which you can learn more about in the guide!

The Association of Visual Artists Vienna Secession is the world’s oldest independent exhibition house expressly dedicated to contemporary art. 10-15 exhibitions per year are organized and planned in a democratic process – and the Secession always shows a willingness to experiment!

Both audio guides are available free of charge at www.culturalplaces.com. They are invaluable for an on-site visit or can also be experienced comfortably on the sofa with the high quality photos included in all our audio guides!