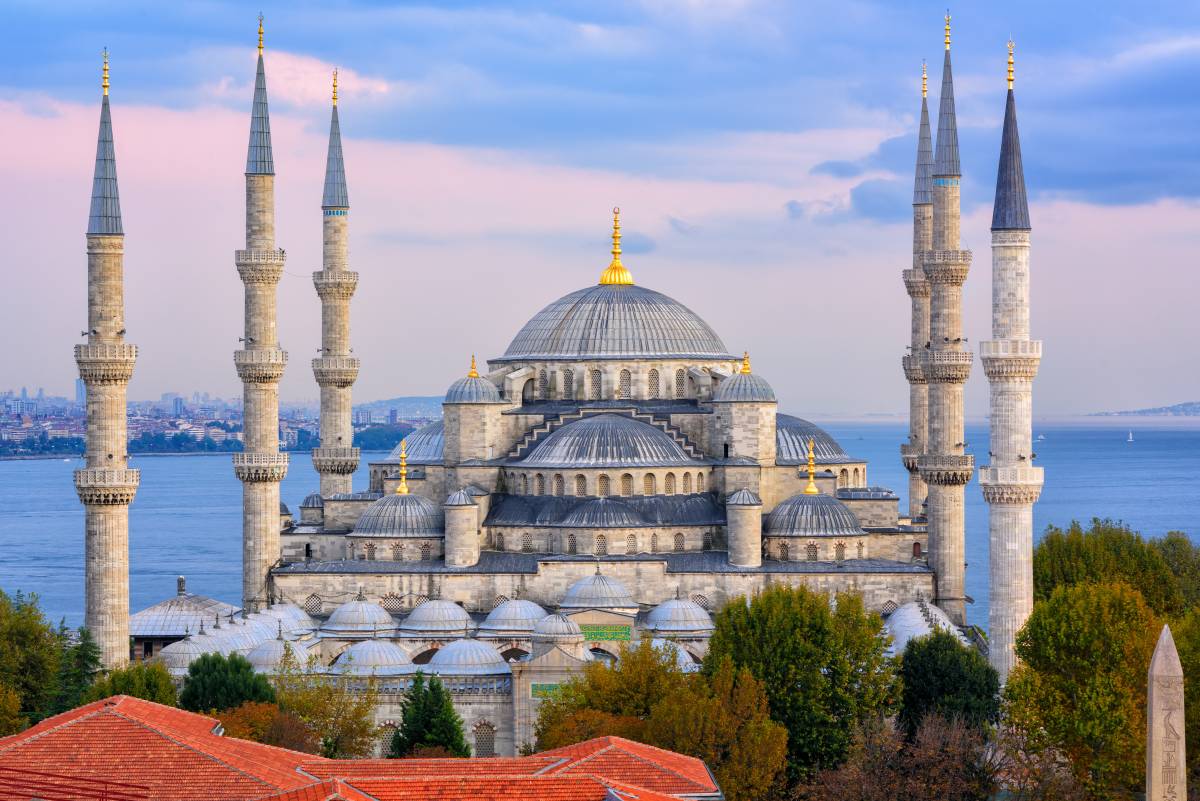 A Brief History of the Blue Mosque in Istanbul

The Blue Mosque is one of the most iconic landmarks of Istanbul and a historical sight you shouldn’t miss. It dominates the city skyline and the majority of tourists’ photos. However, it’s not only a tourist attraction but an active religious building as well! Let’s find out how this breathtaking mosque came into being.

The Building of the Blue Mosque

Sultan Ahmed I ascended the throne in 1603 when he was just 13 years old. He commissioned this gorgeous mosque, also known as Sultan Ahmed Mosque (Sultanahmet Camii in Turkish). Architect Sedefkâr Mehmed Ağa planned the mosque, and construction took place between 1609 and 1616. Ahmed I envisioned a mosque that would surpass Hagia Sophia’s beauty, and the architect indeed fulfilled this task. To show superiority over the Hagia Sophia, he placed the new mosque close to it.

Why did the sultan commission such a huge building? After the Fifteen Years’ War between the Ottoman Empire and the Habsburg Monarchy, he felt the people’s trust in the empire was fading. Ahmet I was looking for a way to reassert his authority and boost the people’s morale. Building this spectacular mosque should show his strength and power. But since he won nothing in the war, he had to use the treasury to fund this expensive project.

The Blue Mosque is considered to be the classical period’s last great mosque. It represents a mixture of two styles – Byzantine Christian and traditional Islamic architectural elements. Parts of the remnants of the Grand Palace of Constantinople were destroyed to make place for this huge building.

The mosque is known for its five main domes, eight secondary domes, and six minarets. It is one of only three mosques in Turkey with that many minarets. Its big and impressive courtyard is adorned with sophisticated decorations. You’ll certainly notice a lot of astonishing details there!

The Story of the Six Minarets

Prior to building the Blue Mosque, there was only one mosque with six minarets in the world – the mosque of the Ka’aba in Mecca.

Religious leaders thought the idea of building a mosque with six minarets seemed disrespectful to the Ka’aba in Mecca. To avoid this offense, Sultan Ahmed ordered a seventh minaret to be added to the mosque of the Ka’aba. However, it’s unclear if this story is true, or if the seventh minaret already existed before the building of the Blue Mosque. 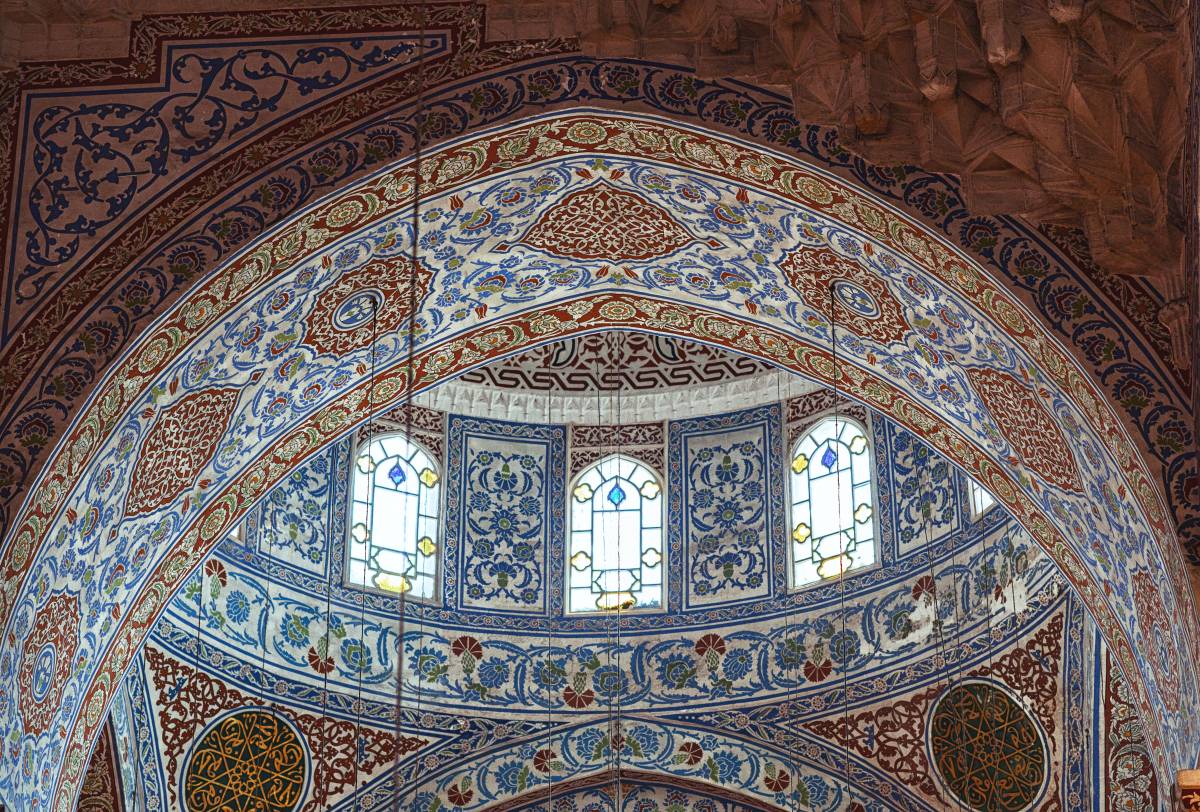 The Blue Inside the Mosque

If you are wondering why it’s called the Blue Mosque, you will find the answer inside. Beautiful Islamic-style ornaments cover the mosque’s interior and give its oriental vibe. Verses of the Qur’an and the sayings of the prophet Muhammad decorate the inside of the Blue Mosque.

If you look around, you’ll know where the mosque got its name: from the beautiful ceramic tiles in hues of blue covering the inside of the domes. These handmade tiles show traditional Ottoman patterns, depicting lilies, carnations, fruits, tulips, and more. They came from a town called İznik, which is known for producing these wonderful decorative tiles.

The upper levels of the mosque are well-lit, with natural light shining through more than 200 gorgeous stained glass windows. There are also enormous chandeliers hanging from the ceiling. Back then, they placed ostrich eggs between the oil lamps to repel spiders and their webs.

The floor is covered with a red carpet, which is regularly replaced once worn out and is usually donated by religious people.

The Blue Mosque is a fully functional religious building, so respect the rules when visiting. The mosque is closed for non-worshipers during the daily prayer times five times a day, so plan your visits accordingly. Be sure to dress appropriately and cover your legs and shoulders, and if you’re a woman, you must cover your head too. Before entering the mosque, take your shoes off and put them in the plastic bag you’ll be given at the entrance. The entrance is free, but donations are gratefully accepted.

If you’re in the area, there are a lot of other things to do and see! Wander around and marvel at the two obelisks and the serpent column, visit the Hippodrome, the Firuz Aga Mosque, and many more. When hunger strikes, we recommend filling your belly at one of the many cafès and restaurants on Tavukhane Street.

The best way to discover the Blue Mosque and its surroundings at your own pace is with Cultural Places’ media guide The Blue Mosque and Its Surroundings. Visit the main sights, learn about their history, and enjoy the city. And if you want more, check out our other digital audioguides in Istanbul!

The famous Blue Mosque is definitely a must-see on your trip! Use it as a starting point to discover the area with its historical buildings, museums, cafés, markets, and much more