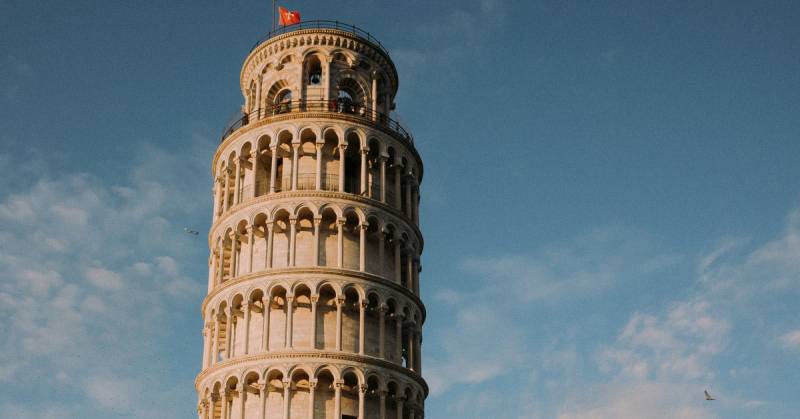 Incredible Facts About the Leaning Tower of Pisa

With more than 5 million visitors each year, the Leaning Tower of Pisa (Torre Pendente) is one of the best-known landmarks in Italy. It is also the most famous tourist backdrop in Pisa, and visitors really keep getting creative when it comes to posing in front of it (we have gathered our favorite snapshots on our Instagram for you). If you are wondering now what makes this tower special and why it is tilted, keep on reading!

A Miracle on Square of Miracles

The Leaning Tower of Pisa is a bell tower or campanile located on the Square of Miracles (Campo dei Miracoli or Piazza dei Miracoli) in the city of Pisa. This famous tower is only one of the four buildings that form the cathedral complex in this square. The impressive Romanesque cathedral, Duomo di Pisa, was built first. The baptistery was added next, after which the work on the tower began. Before the tower was finished, the cemetery, Campo Santo, completed the complex.

As the signature piece of this complex, this tower was surely a miracle at the time it was built, not just because of its signature lean, but because it was the tallest bell tower in Europe.

Building the Tower for Centuries

Construction work started at the end of the 12th century and was finally finished at the end of the 14th. Yes, it took two centuries to build this tower! But you have to keep in mind that the work had to be paused twice — for over a century in total — because of military conflicts among Italian republics at the time.

The Pisa Tower Got Famous Because of a Mistake

Without its signature lean, the Tower of Pisa would probably be just another tower in just another European city. But because of the poor planning that was done prior to building the tower, it eventually started to lean. The architects working on this project made the foundations too shallow and didn’t take into calculation the softness of the ground which consists of sand, clay, and deposits from the Arno and Serchio rivers. It just couldn’t support the weight of the tower; after building its second floor, the builders noticed that it started to tilt. However, this didn’t stop them from finishing the tower. Who would have thought that exactly this mistake would make the tower as famous as it is today?

As the construction workers kept going with adding additional stories on the structure that had already started to lean, they confused its gravity center. So, instead of fixing the building’s posture, they caused the lean to switch its directions — it started to lean south instead of north, which was originally the case.

The Leaning Tower of Pisa is Still Standing… For Now

As the years (and centuries) passed by, the ground beneath the tower kept sinking and the lean got worse: from the initial 0.2 degrees, it increased to a 5.5 degree lean towards the south. So in the 1990s, engineers tried to fix the tower’s lean by leveling the ground beneath it using anchoring mechanisms. This stabilized the tower and reduced its tilt to 3.97 degrees. Unfortunately, this didn’t last long, so engineers tried fixing it again in 2008, and successfully stopped the tipping of the tower. However, the ground isn’t fixed for good, so the tower might start tilting again in the early 23rd century — at least that is their prediction.

The Leaning Tower of Pisa on Square of Miracles

It’s Not the Only Structure in Pisa That Leans

Believe it or not, the Tower of Pisa is not the only structure in this Italian city that has an unusual posture. This is certainly caused by the city’s soft ground. But could it also be attributed to the lack of expertise of the Pisani architects? Among the leaning structures, you’ll see San Nicola, a 12th-century church located less than a kilometer from the Leaning Tower of Pisa, and San Michele degli Scalzi, an 11th-century church about three kilometers to the east.

…Nor in the World

The Tower has some serious competitors around the world. Two towers in Germany have “out-leaned” the Pisani tower: the Leaning Tower of Surhuusen, dating back to the 14th century, and the tower of the 14th-century church Oberkirche. The shorter of the Two Towers of Bologna leans farther than the Tower of Pisa.

Galileo Galilei and the Tower

There’s a legend related to the tower and the famous Italian astronomer, physicist, and engineer Galileo Galilei. Apparently, Galileo dropped balls of the same material, but different masses, from the tower to demonstrate that the speed of their fall was independent of their mass. However, there is no evidence that this ever happened, and today it is only considered as a thought experiment.

Close-up of the famous tower

You might think that a tower this tall is not the best option to hide your troops in — it might be an easy target. But the German army thought it wasn’t the worst idea, because it provided the best surveillance of the surroundings.

When the American troops arrived on Italian ground, they were ordered to destroy all buildings that could serve as a hiding place for the enemies, and the leaning tower was one of them. Luckily, the retreat took place shortly after their arrival, and they never made it to the tower, so it survived the war without a scratch.

This miraculous tower is one of the most popular and most photographed Italian landmarks — you’ve seen so many people taking photos where it looks like they’re pushing the tower with their bodies, as we mentioned. 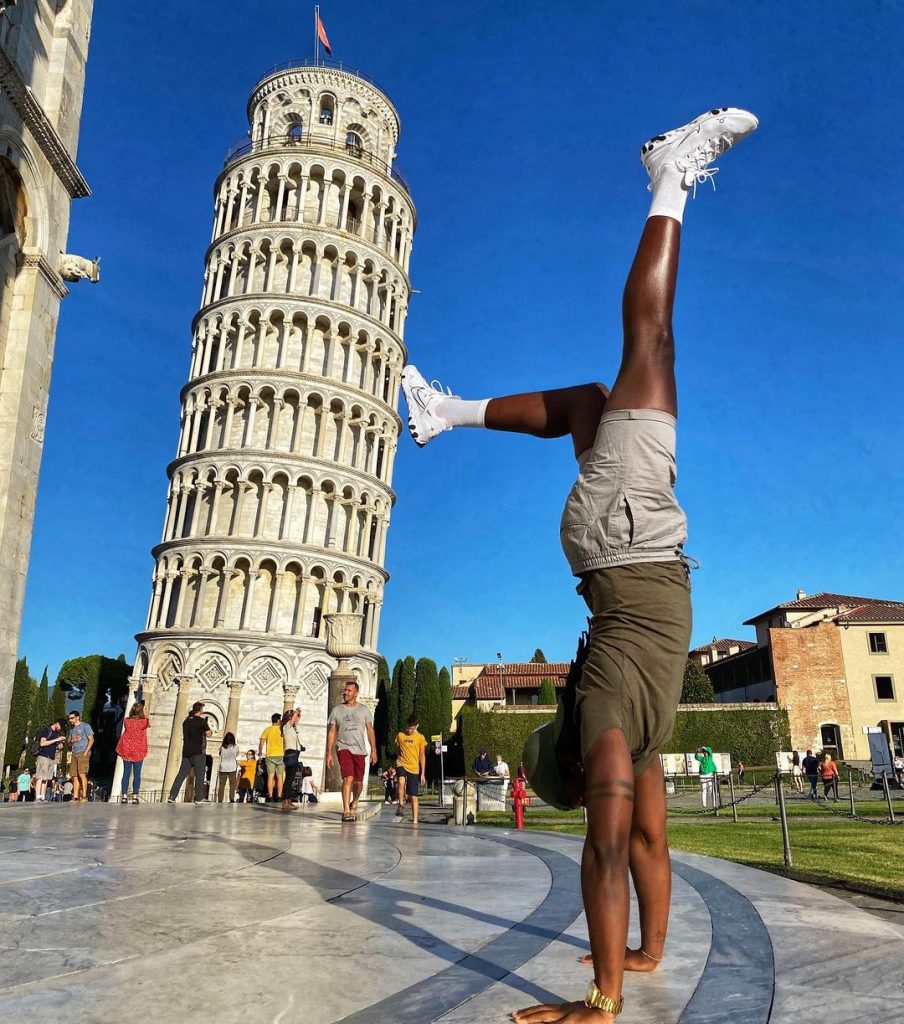 Creativity knows no limits when it comes to capturing the best angles of the Leaning Tower of Pisa. © coach.pvnda on Instagram

Together with the Square of Miracles, it stands on, the tower was declared a UNESCO World Heritage Site in 1987, and it was totally deserved.
The Leaning Tower of Pisa is also on our list of the most iconic European landmarks, so if you’re interested to find out about the rest of the list, check out our blog post “7 Most Iconic Landmarks in Europe”.