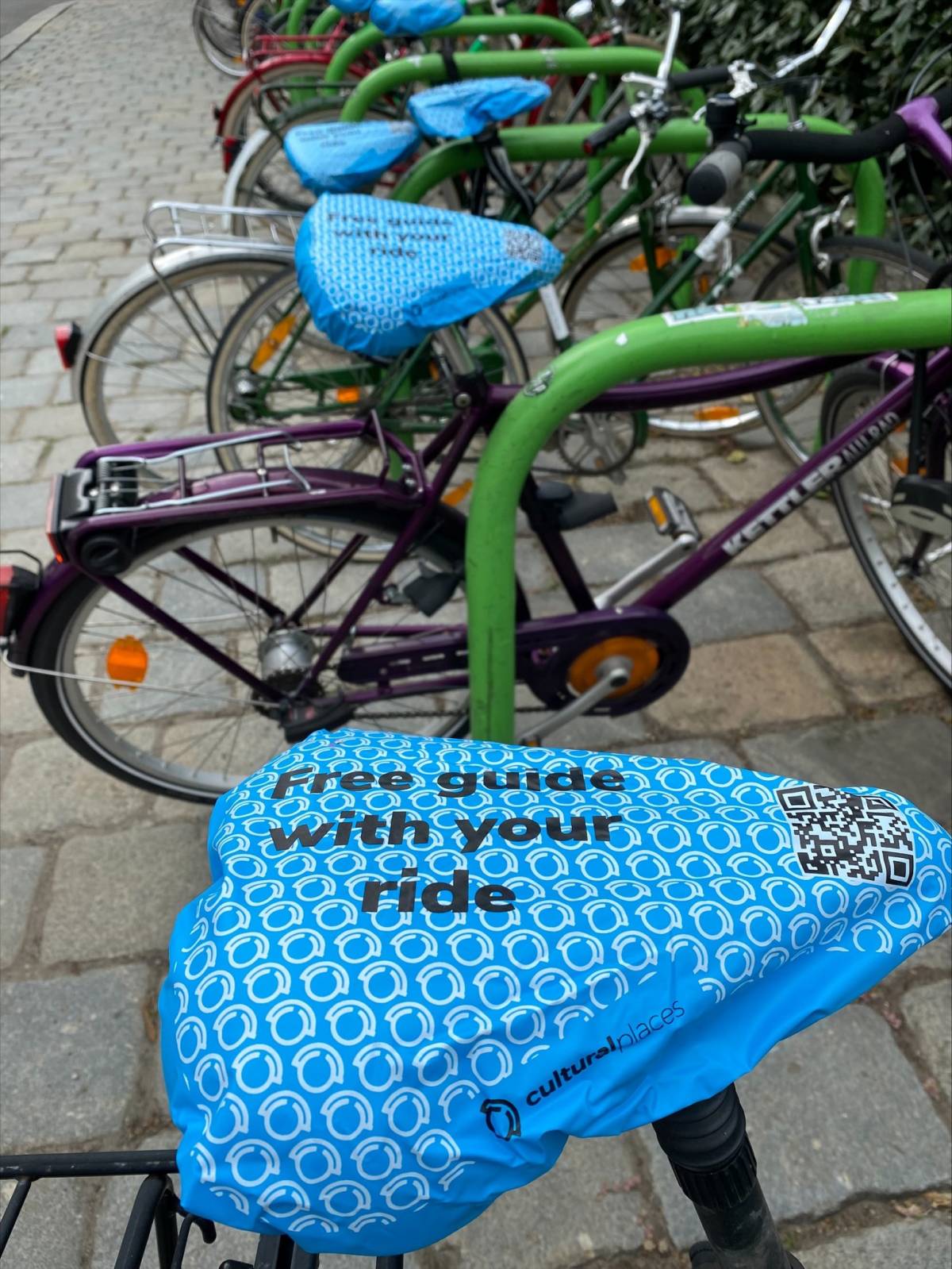 Exploring Vienna on wheels is definitely always a good idea and adds some variety to the usual sightseeing tours. We offer two ‘’Vienna on Wheels’’ tours and wanted to make them more accessible, so we held a special event called “Ride & Guide” where we explored some stations of our Vienna on Wheels: From Schönbrunn to Stubentor tour together with special guests.

The weather god was kind on August 20th and welcomed us with sunshine and blue skies when we met in front of Haus des Meeres to start our first live event. We wanted to show first-hand how our Vienna on Wheels tours work, so we invited selected media representatives and influencers on an exclusive tour. We decided on our ‘’Vienna on Wheels: From Schönbrunn to Stubentor’’ tour, as we didn’t want to push our guests to bike up Cobenzl (however if you’re up for a little more exercise, we highly recommend checking out our Vienna on Wheels: From Hundertwasserhaus up to the Wine Hills tour). The sort of wheels you take on the tour don’t really matter, we used bicycles and rollerblades, but you can also explore Vienna on an e-scooter, or whatever floats your boat!

To not make the event too long, we cut out the beginning of the tour and dove right in at Haus des Meeres instead of Schönbrunn. We also had goodies for our participants – they received both a Cultural Places bike seat cover and the universal smartphone mount “Finn” by Bike Citizens. 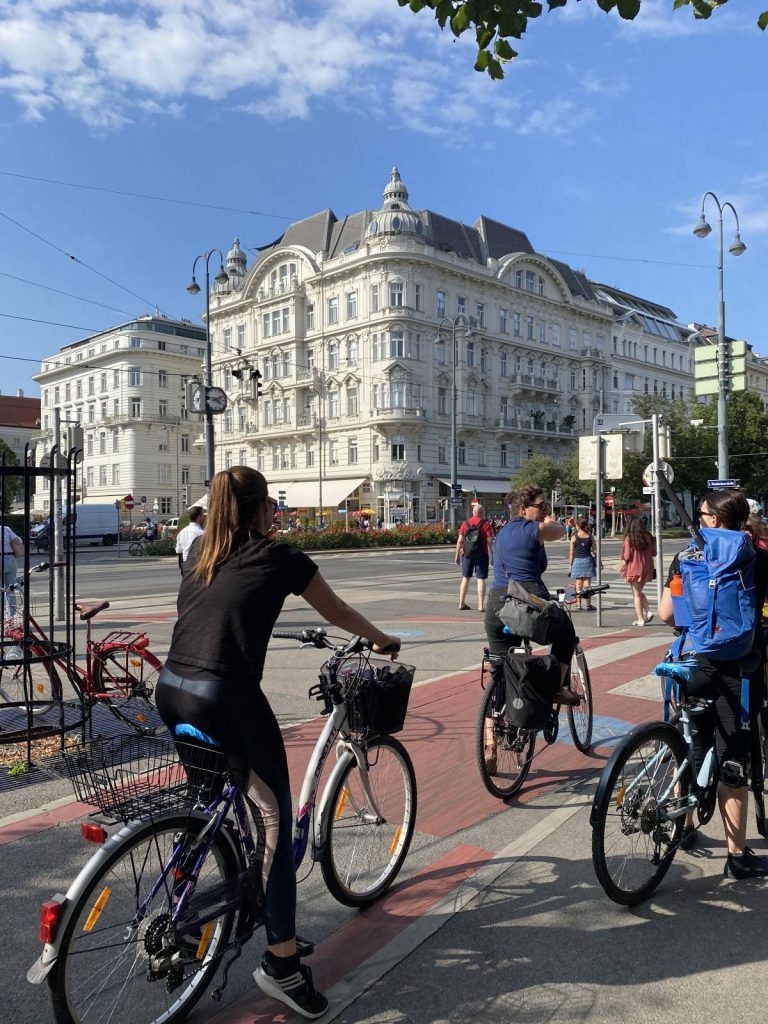 Exploring Vienna on wheels offers you different views and perspectives.

Ride and Guide through Vienna

After a short welcome by our CEO Patrick Tomelitsch who explained the vision of Cultural Places, our Project Manager Anna Cossa, who was in charge of producing the Vienna on Wheels tours, gave some background information on the tour. Soon we were good to go and set off on our ride to the second stop, Naschmarkt. Afterwards, we visited one of our partners, the Vienna Secession. Here we learned that the secession was erected 1889 as an exhibition space and was also the center of the famous Secession movement. The style emerged as a reaction to the conservatism of Austria’s art institutions back then. By the way, did you know how the first president of the secession was? It was no one less than Gustav Klimt himself!

From there, we continued our journey from Karlsplatz to Schwarzenbergplatz. Have you ever noticed the distinct Hochstrahlbrunnen at Schwarzenbergplatz? We guess so, but did you also know the history behind this impressive fountain? It was built by the Habsburgs to celebrate the construction of the city’s first water pipe which supplied the citizens with access to safe drinking water. 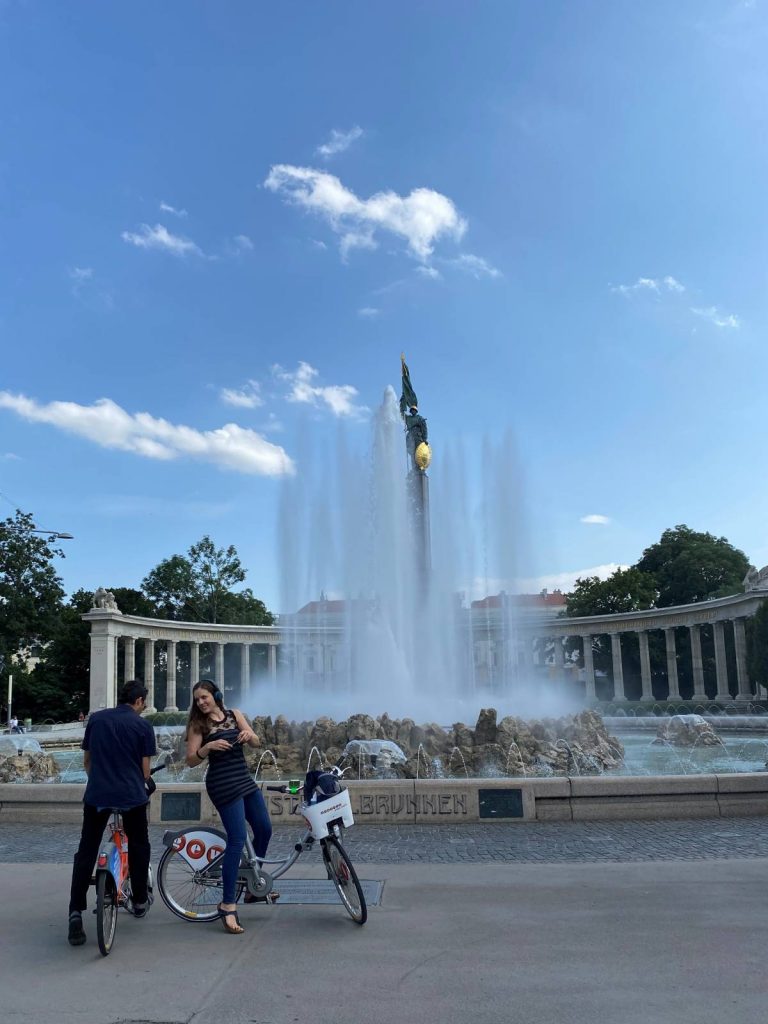 Did you know the history behind the Hochstrahlbrunnen at Schwarzenbergplatz?

Always accompanied by our audio guide, we then rode along the famous Viennese ring road, which roughly traces the same path as the former city walls, until we reached the actual remains of the old city walls at Stubentor. In former times, Vienna was a Roman military base called Vindobona, which was encircled by fortifications. Stubentor was one of the few city gates that controlled the flow of traffic passing in and out of the city. Here, our bike tour came to an end.

But that wasn’t all – we had organized a little surprise picnic at Stadtpark. With goodies from Ströck and drinks by Spritzweinmonarchie and Brew Age, we finished the day in a relaxed atmosphere and enjoyed one of the last lovely summer evenings together. 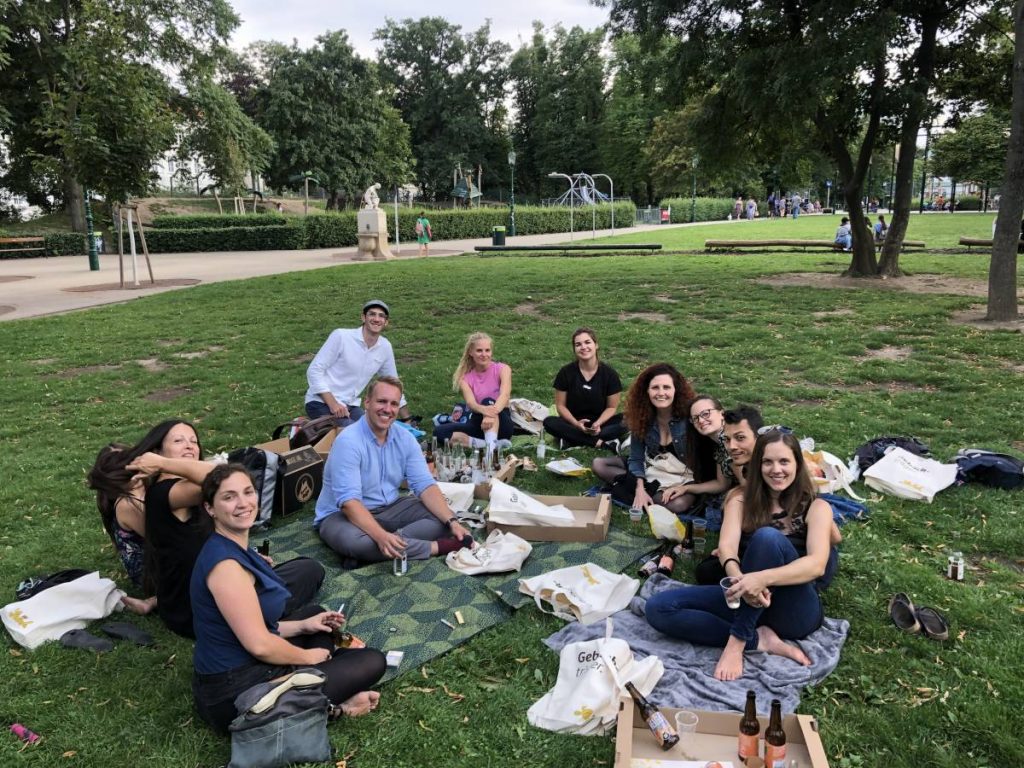 After biking, we treated ourselves with a nice picnic at Stadtpark.

Here you can see a video summary by W24 – das Stadtfernsehen of our event. Further impressions can also be found on our Instagram. We are looking forward to our next live event in October, so stay tuned – more information is coming soon.

PS: You can still get the Vienna on Wheels: From Schönbrunn to Stubentor for free for a limited amount of time, so be quick!