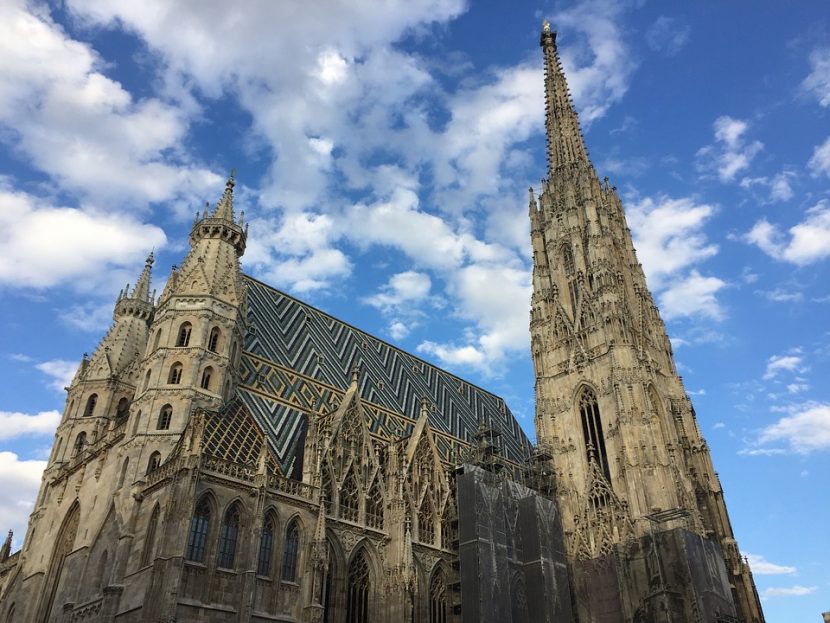 Stephansdom — the Pearl of Royal Austria

If you have already been to Vienna, then you know it. Stephansdom is one of the biggest attractions of the Austrian capital. A genuine treasure of what Austria can offer and a reminder of Austria’s glorious times. With almost three million visitors a year, this is the number one attraction in the city and a real trademark of the biggest city in Austria. In case you are interested in discovering some of the most amazing facts about this place, stay with us, cause in the next 5 minutes we will take you on a journey through time and show you something very special about this place.

But that’s not all. And the end of this tour we will share with you one interesting story that happened here. But, let’s keep it as a secret now.

So, what do you say? 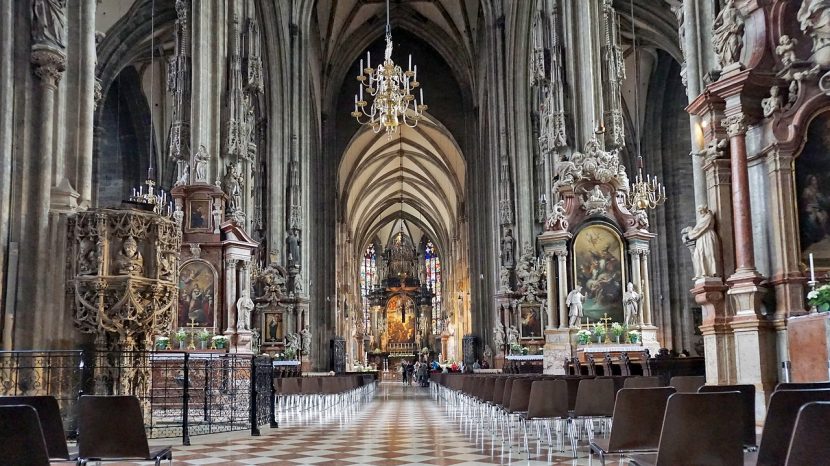 Stephansdom is a world-famous cultural heritage site and monument that stands up confidently to international comparison. The UNESCO has named the historic center of Vienna a “World Heritage Centre”, and the cathedral played an important role in this.

However, not so long ago during the Second World War, the cathedral was severely damaged and virtually reduced to rubble. But with seemingly everyone lending a hand, the place was rebuilt in just seven years and the symbol of Austrian identity had risen once more from the ashes.

What makes Stephansdom so unique is that it is also a place of worship. Religion and spirituality have always been important to people, and Stephansdom is no exception. Seven services are held on weekdays and ten on Sundays. Always wonderfully decorated, the place becomes particularly busy with visitors on high feast days such as Easter, Whitsun or Christmas.

We could say that this is a true symbol of one nation, a monument that makes an entire country proud. 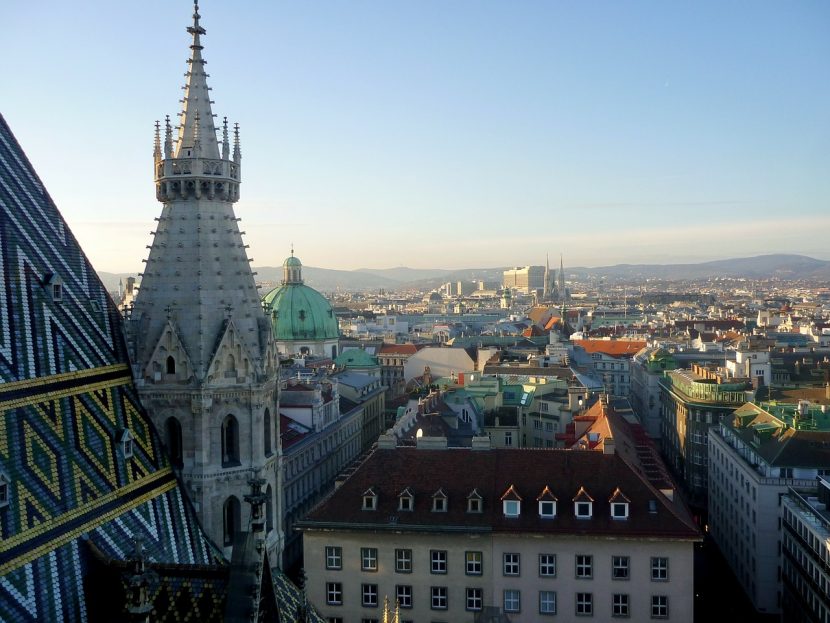 In case you want to discover the best from the best about this place, look no further cause we have a treat for you. Together with the group of experts, we have created a special kind of media guide, to show you the Stephansdom in a totally unique way.

Multilingual and very user-friendly Cultural places platform contains everything that you need to know about this place and the best thing of all is that it is super easy to use. All you gotta do is download, listen and enjoy the stories we prepared for you.

Map of the Stephansdom, Vienna

Below is a Vienna’s U-Bahn with a location of Stephansdom marked in red. 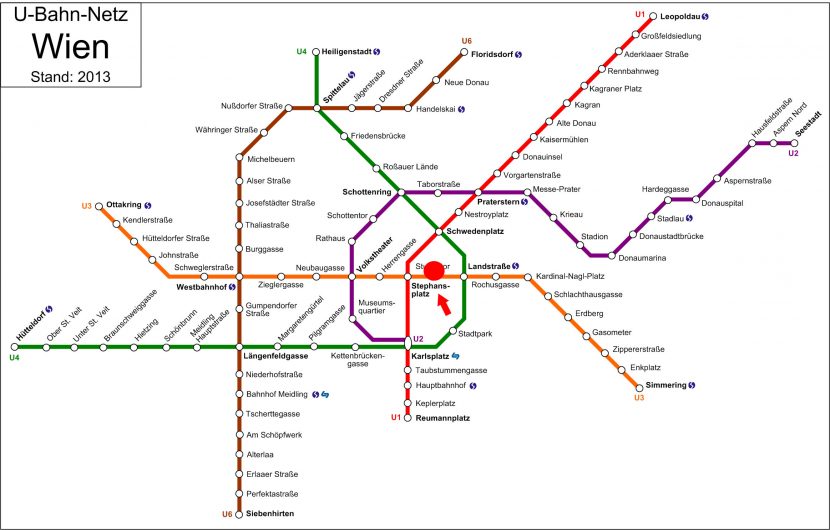 And just one more thing.

We also promised you one interesting story, remember?

Well, here it is.

Once upon a time, there lived a young man in Vienna, his name was Hans Puchsbaum. He was a very talented architect; he was very ambitious but not yet famous.  Hans was in love with a beautiful young woman; her name was Mary and she was the daughter of an honored and rich citizen.

That time Stephansdom was still under construction. The nave and the South tower were already completed. Only the North Tower which should mirror the one on the south side was not built yet. The city council had given a contest to transfer the work to the ablest architect, who would complete the tower in the shortest time and at the cheapest cost. So it came that Hans Puchsbaum applied for the job to build that tower. He thought when he could get fame and honor; he could acquire the hand of his beloved Mary. Hans promised to build the tower within half the time of his competitors, and so – he got the job.

In the beginning, everything worked well, but soon some troubles appeared; the materials were delivered too late, the calculations of the construction were not exactly enough, and too many days the builders had to stop their work in case of bad weather.

Hans Puchsbaum recognized that he couldn’t finish the tower in the time he had promised.

One evening he stood lost in his thoughts in front of the church and looked up to the unfinished tower. Suddenly a little strange-looking man in a green suit stood on his side.

”Oh, what a pity,” the little man said, “things don’t look good for you, eh?”
Hans Puchsbaum told him about his sorrow.
”Ah, don’t worry; I can help you. And with my help, you can still complete the tower in time. There is just one little thing I ask you to do.”

“You are not allowed to mention the name of God, Mother Mary’s name or any other name of a Saint. This is all I want.”

“Ha, of course, that’s a deal!” Hans said although he had noticed that he had just made a pact with the devil.

Since that day the North tower grew faster than ever before.
Hans Puchsbaum was happy; he saw his goal near; he could finish the tower in time and finally marry his beloved bride.

One beautiful day he stood high above on the scaffolding, he looked down on the square and watched the people moving. He smiled, “Just a few more days …”

In that moment he discovered his bride in the crowd. Full of joy he called her name, “Mary!” Suddenly hollow mocking laughter echoed through Vienna, the scaffolding started to sway and with an incredible noisiness, the whole construction broke down and drew Hans Puchsbaum into the depths.

For a few moments, a gigantic green figure with a grinning face was seen. Then the people dared to remove the debris. But the dead body of Hans Puchsbaum couldn’t be found and remained disappeared. The plan to build the North tower of St. Stephen’s was given up that day and was never taken up again.

So, when are you coming to Vienna?

P.S. And while in Vienna, maybe you should consider making a short day trip to Budapest. It’s just few hours away. Here are the top 10 things to see in the Hungarian capital.

We thank Viennese legends for providing us with more information on the legend of Missing Tower.