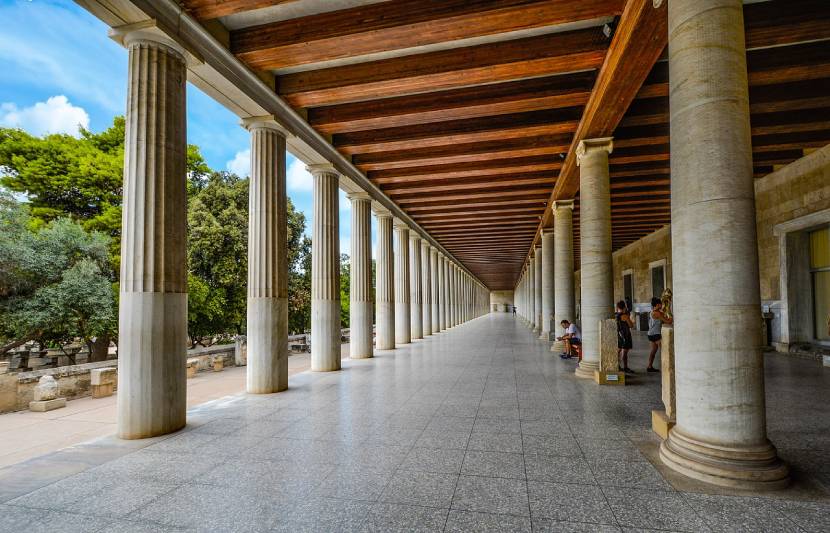 Be sure to visit our Cultural Places platform and you’ll find a few amazing tours around Athens, that will give you the freedom to explore the city by yourself, with only your smartphone.

The Acropolis Museum, built at the foot of the Acropolis, opened its doors to the public in 2009. It is focused on the findings uncovered on the Acropolis hill and the surrounding area. 4,000 objects are exhibited over an area of 14,000 square meters.

The museum itself is an architectural masterpiece that houses many gems from throughout antiquity. You can admire many freestanding sculptures and the famous Caryatids, pillars in the shape of female figures that support the roof of the Erechteion, a temple on the north side of the Acropolis. The sculptural decorations of the Parthenon are exhibited on the top floor. This gallery has the exact same dimensions as the cella (inner chamber) of the temple, giving visitors the opportunity to comprehend its size. This level also offers a splendid panoramic view of the Acropolis.

If you want to relax after exploring the Acropolis, or if you just finished visiting the museum, take a coffee break in the museum’s lovely café, where you can enjoy this unique view. But remember, you’ll get the most of your visit to the museum if you also visit the Acropolis itself. We offer an audio-guided Acropolis Tour, that you can find on our Cultural Places Platform, to make your exploration of this amazing hill a unique experience. 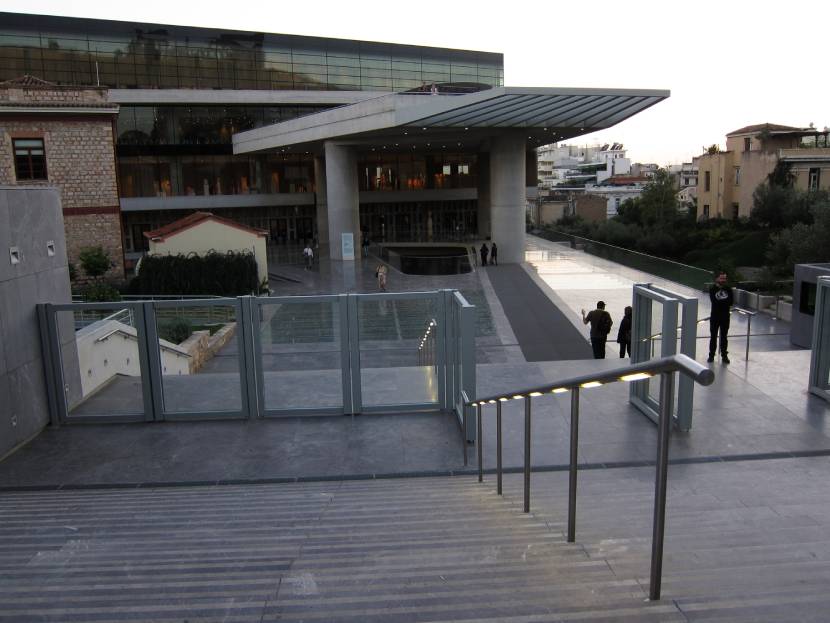 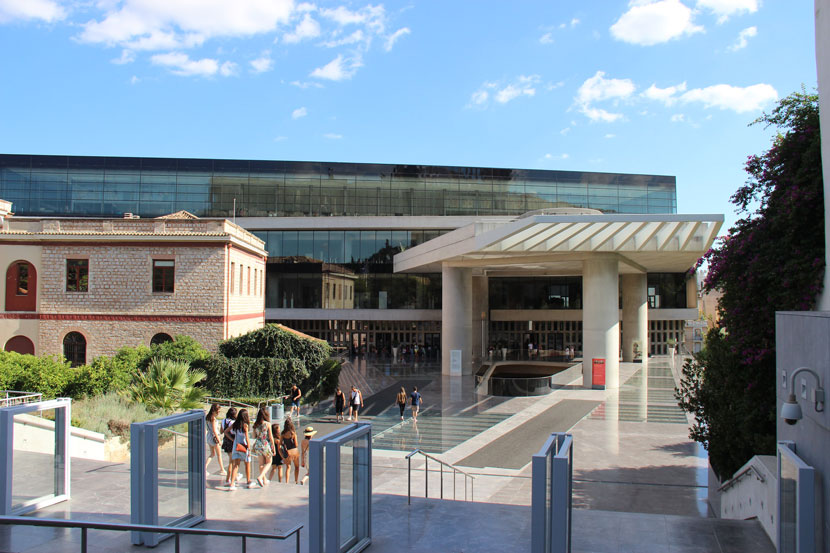 Museum of the Ancient Agora

The Museum of Ancient Agora is in the Stoa of Attalos, a Hellenistic building from the 2nd century BC that was restored to its real scale in 1956. It gives you the opportunity to get the most accurate picture of how the agora looked in ancient times.

The Agora Museum hosts a chronologically organized collection, all the way from the Neolithic to the Post-Byzantine and Ottoman periods, showing the evolution of the agora through time. Climbing up to the first floor, you will find a magnificent exhibition of sculptures and can admire a view of the ancient agora and its monuments.

All of these are included in our Ancient and Roman Agora Tour, which unfolds stories from antiquity until today. You can get the tour on our Cultural Places Platform.

Museum of the Ancient Agora 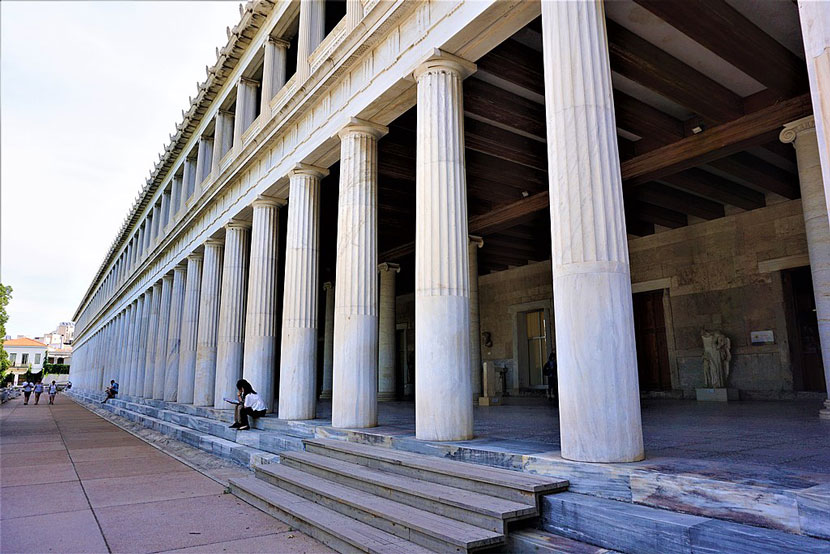 The Byzantine and Christian Museum is located on one of the most famous streets in Athens, Vasilissis Sofias street. It contains religious artifacts from the Early Christian to later periods, including icons, sculptures, ceramics, and architectural elements such as wall paintings and mosaics. The museum’s central building is the impressive Villa Ilisia. This was the home This of the Duchess of Plaisance and was built in the middle of the 19th century.

Exploring this museum sends you on a journey back through time. The evolving timeline, interesting artifacts, and beautiful gardens make this museum a must-see for visitors to Athens.

Don’t forget to download the Vasilissis Sofias Tour, that you will find on our Cultural Places Platform. There, you can find more information on the museum and other interesting buildings along Vasilissis Sofias street. 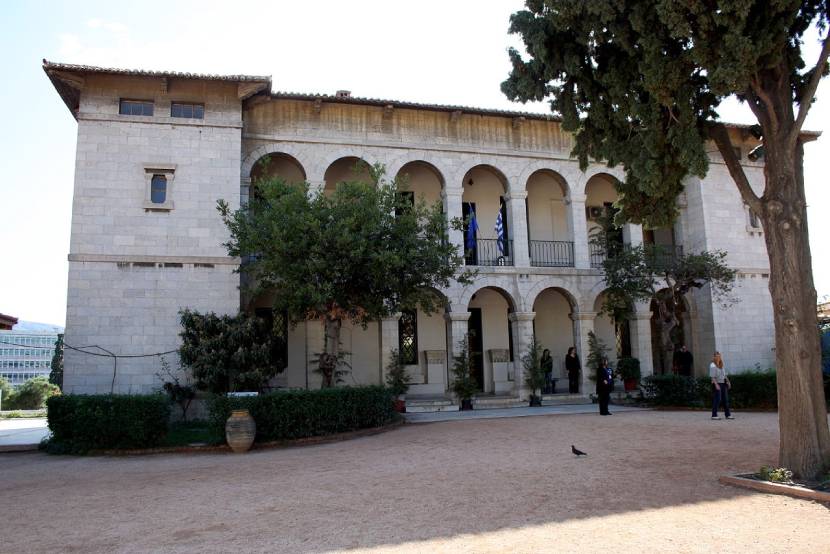 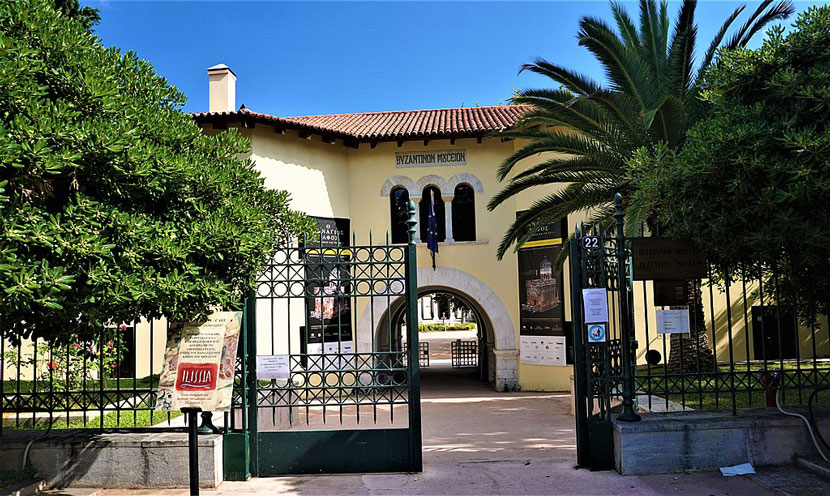 The Benaki Museum of Greek Culture is housed in a beautiful neoclassical-style mansion. It was converted into a museum in order to house the collections of Antonis Benakis, a son of one of the leading families of the Greek diaspora who was born in Alexandria in 1873.

Be sure to visit the Benaki Museum and explore the long and colorful history of Greece. You can learn a bit more about this museum in our Vasilissis Sofias Tour, that you will find on our Cultural Places Platform. 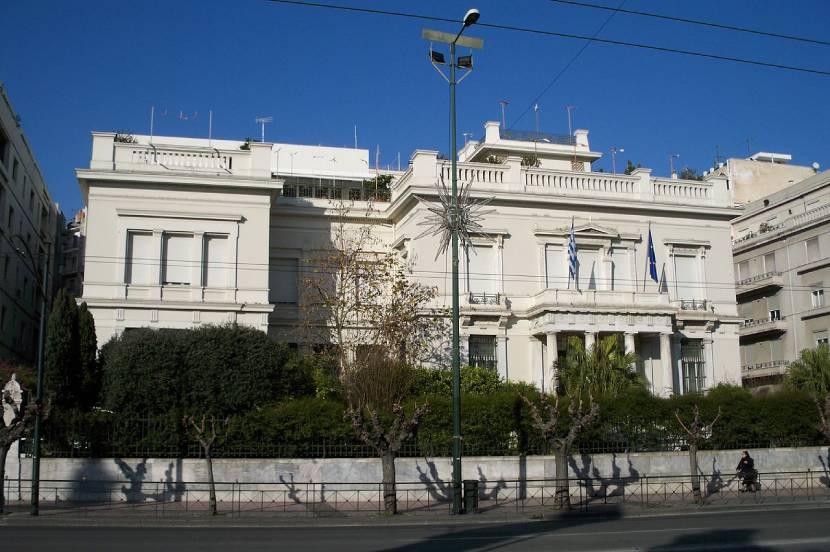 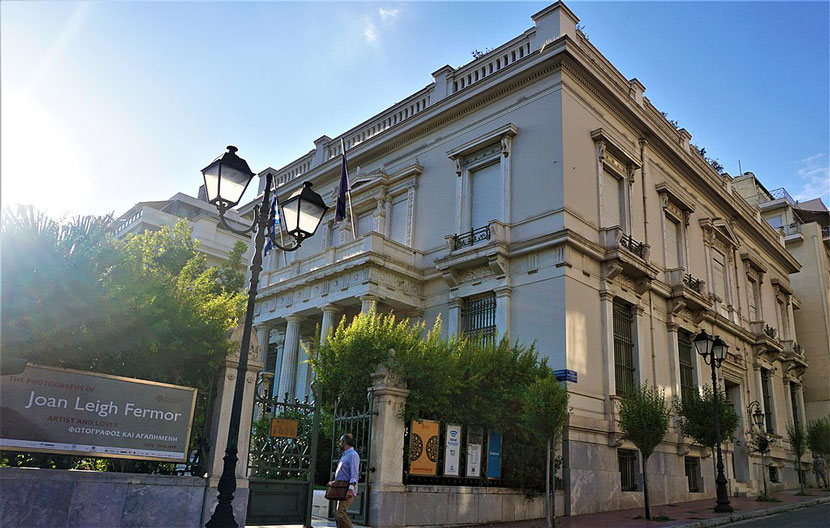 Even before entering this museum, one is struck by the splendor of the neoclassical building. Inside this impressive building lies a treasure trove of objects from Cycladic culture, which was active on the Cyclades, a cluster of islands in the central Aegean, between 3200 and 2000 BC.

The exhibit presents 350 objects representative of every phase and type of artifact from this civilization, such as the famous marble sculptures representing human figures—mostly female—with their arms folded above their bellies. You will also find a large collection of ancient Greek art, as well as artifacts from Cypriot culture.

The Museum of Cycladic Art also organizes very interesting temporary exhibitions. If you want to learn more about this building, find the Vasilissis Sofias Tour on our Cultural Places Platform, put on your headphones, and soak up some history! 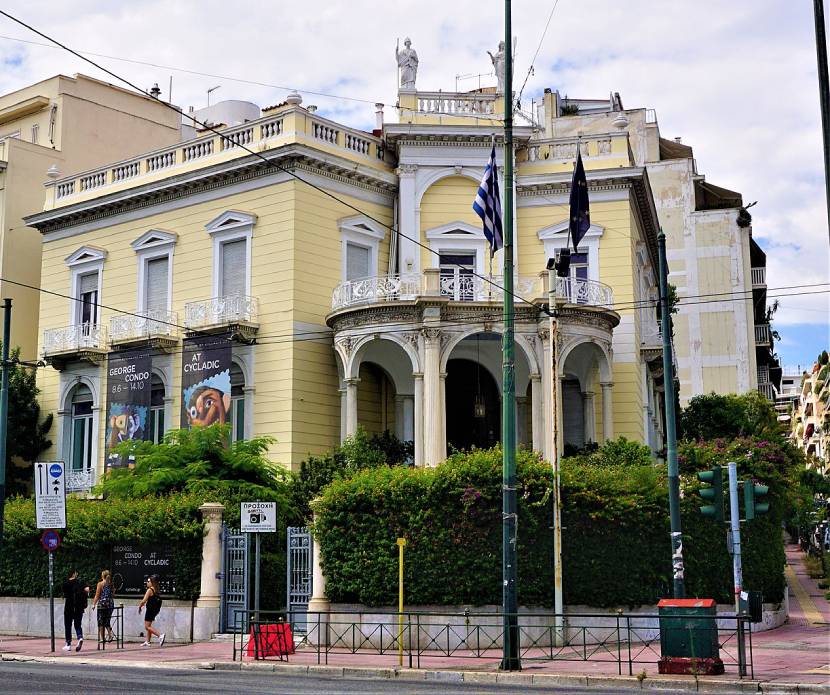 Museum of the City of Athens

The Museum of the City of Athens is the place where you can learn about the city of Athens since it became the Greek capital in 1834. It is housed in a gorgeous neoclassical mansion, which is the former residence of Greece’s first royals — King Otto and Queen Amalia. This museum shows reconstructed residential spaces of old, traditional, Athenian families, from the 19th century, until modern times. The rooms are really nicely decorated, you will love exploring them.

When you’re done with exploring and learning about life in Athens, get down to the garden and enjoy a nice cup of coffee in the shades, or have a nice meal and call it a day. 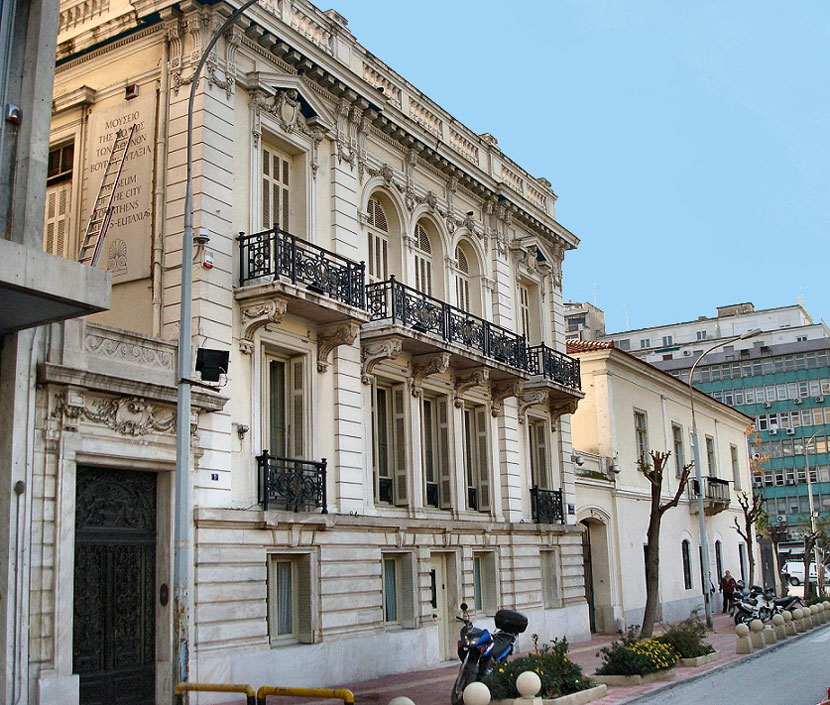 The Museum of the City of Athens

National Historical Museum is located in the building of the first House of Parliament, and it covers an impressive collection of the period since the fall of the Byzantine Empire in 1453, with an emphasis on the 1821 Greek War of Independence from Ottoman rule. You’ll get to see some pretty impressive statues of prominent leaders, such as the equestrian statue of  Theodoros Kolokotronis.

The museum interior is amazing, and various events often hosted in one of its chambers. One of the most interesting rooms is the one in which you will see the collection of traditional local costumes from the period of Ottoman rule; it’s a genuine feast of colors, needlework, and jewelry from the old times. 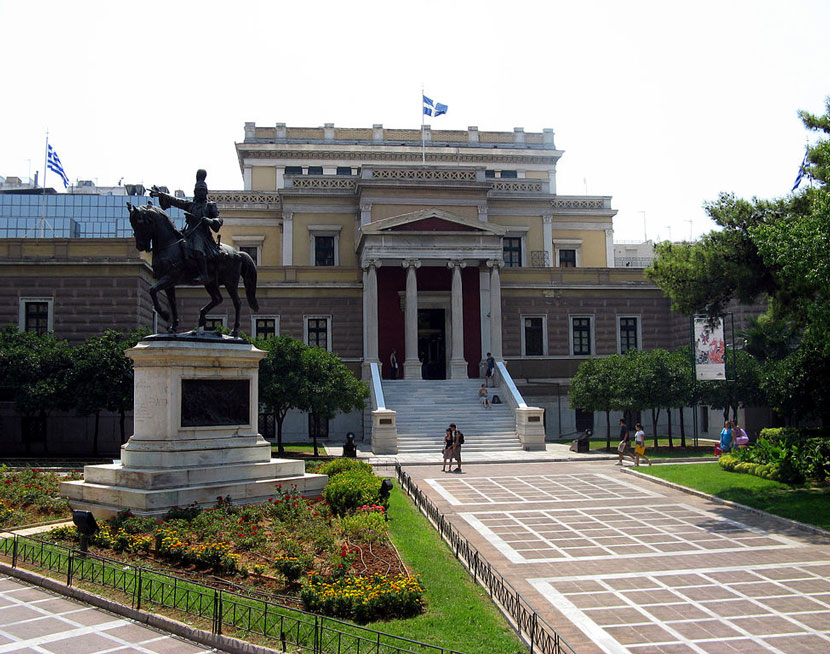 If you’re into archaeology, this museum is perfect for you! National Archaeological Museum is the most significant museum devoted to Greek art, with the largest and most impressive collection of findings from the Neolithic period, Bronze Age, Cycladic, Mycenaean and Roman eras. Its exhibits show the true greatness of the Greek culture, and it’s really something that you must see.

It is housed in a gorgeous neoclassical building, that is impressive itself. Once you’re done with admiring the building and the exhibits, you can get down to its impressive garden and enjoy a cup of coffee. 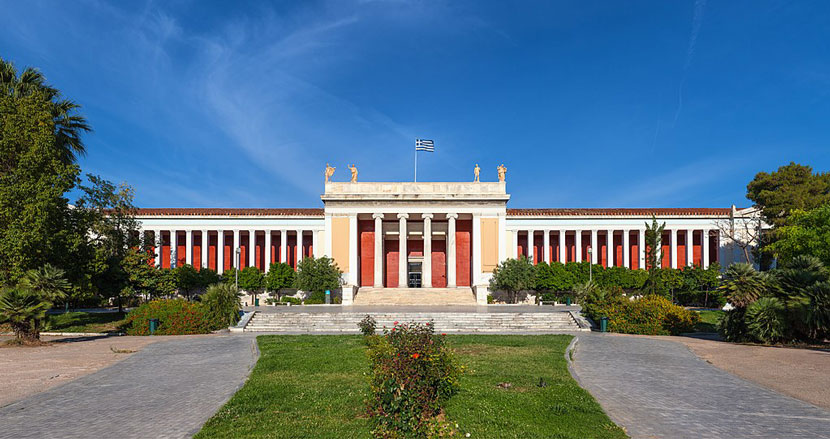 We’re gonna stop here, but you should know that there are many more museums in Athens worth paying attention to! Don’t hesitate to visit as much as you can, and, what’s most important, have fun. If you’d like to read more about amazing places in Athens, check out our previous blog post: “Explore the 6 Most Picturesque Places in Athens“