Everything You Need to Know about Art Nouveau in Europe

We’re sure you admired all those beautiful buildings that you stumbled upon when you visited Vienna, Prague, Budapest, Brussels, and other European cities, right? In case you were wondering, many of them might be built in the Art Nouveau style. Do you want to learn a little bit about this gorgeous style while dreaming of your next trip? Keep reading because you’re about to find out everything you need to know about Art Nouveau in Europe.

The Beginning of the Art Nouveau

Art Nouveau, which is French for ”new art“, is a style that flooded Europe at the end of the 19th century, and was extremely popular through the beginning of the 20th century as well. But what might be a little surprising is that this movement had a pretty short lifespan — after the peak in the 1910s, it got out of fashion.

This was an international style with many names: Sezessionstil in Austria-Hungary, Jugendstil in Germany, Stile Liberty in Italy, Modernismo catalán in Catalonia (Spain), and Modern Style as another English name for it (just don’t confuse it with Modernism).

This unique and unusual style at that time was a reaction against other styles that were known back then — the academic art, eclecticism, and historicism, and it was invented to break the traditional distinction between fine and applied arts, that was pretty normal back then. So, when observing the Art Nouveau you’ll see everything, from fine arts, jewelry, furniture, glasswork, textiles, to gorgeous buildings that are still standing, and even metalwork. What makes this style so special is the incorporation of the natural, asymmetric lines called whiplash lines, usually seen on flowers and other plants.

It is rather unclear how this new art style showed up at first, but it was certainly influenced by a few people. One of them was the British medievalist, William Morris with his famous floral designs, and the Arts and Crafts Movement, founded by his students. 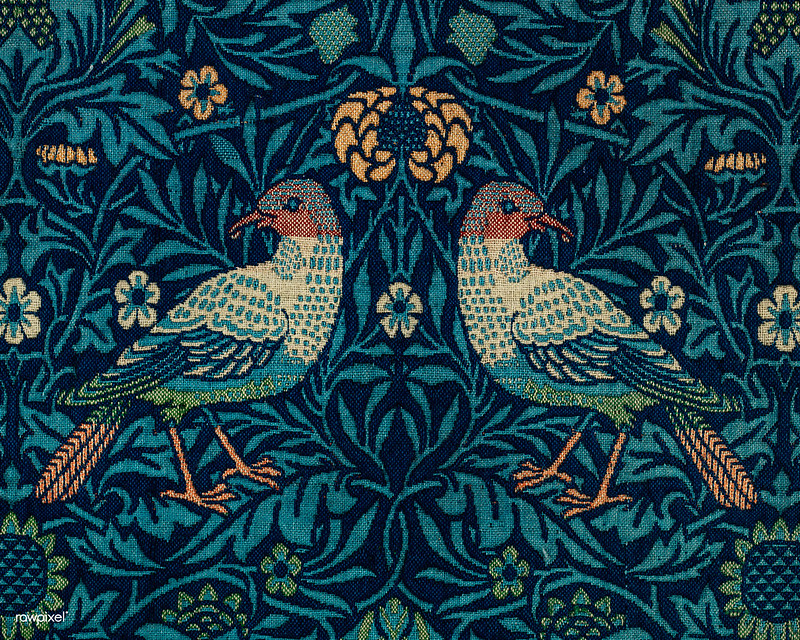 In France, it was strongly influenced by the architectural theorist and historian Eugène Viollet-le-Duc, whose words influenced many famous architects of that time, including Louis Sullivan, Victor Horta, Hector Guimard, and Antoni Gaudí. The integration of fine arts into decorations of everyday objects was also influenced by a few French painters: Maurice Denis, Pierre Bonnard, and Édouard Vuillard. We must not forget that Art Nouveau was also influenced by Japonism — another style influenced by Japanese art, especially woodblock printing.

Many artists stood out during this short period that Art Nouveau was popular in — there were various illustrators, painters, printmakers… Just like artists in applied arts, their work was also influenced by natural forms, and so-called whiplash lines.

One of the most popular artists of that time was surely Gustav Klimt, who combined the symbolism paintings and the decorative surfaces. Klimt is best known for his “Golden Phase” in which he used golden leaves on his paintings. The most famous piece for sure is “The Kiss”, and, we must say — it’s stunning! 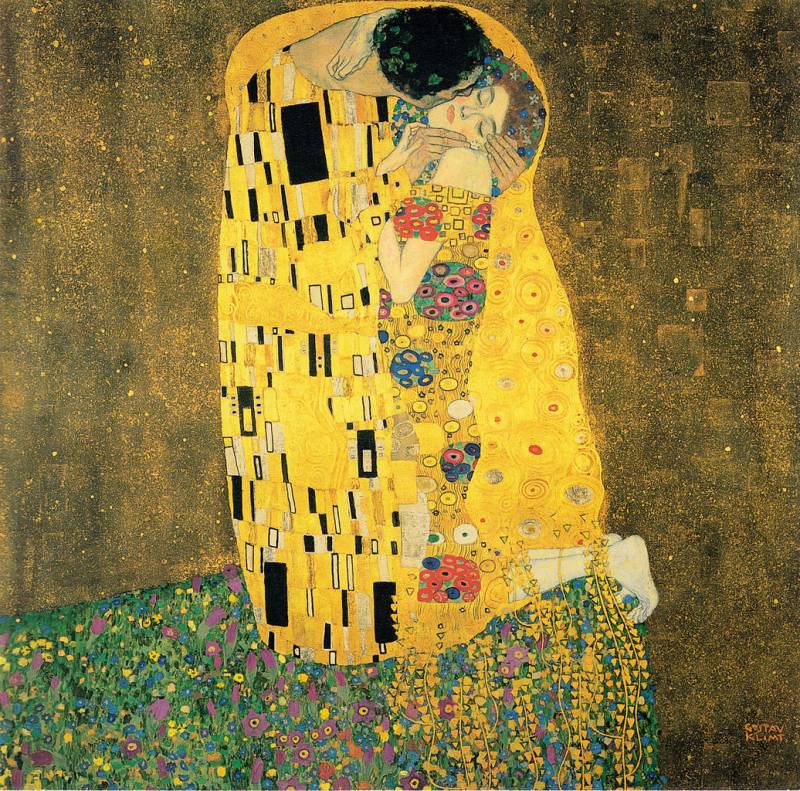 Besides just being an extraordinary painter, Klimt is known as one of the founders of a specific Art Nouveau movement in Vienna, called Secession. The Vienna Secession was a very important part of the whole Art Nouveau movement. It was founded in 1897, by a group of artists who wanted to have a place to work and exhibit at, exactly how they wanted. Those artists were, besides Klimt, Koloman Moser — graphic artist, Josef Hoffmann — architect and designer, Joseph Maria Olbrich — architect, Max Kurzweil — painter and printmaker, Ernst Stöhr — painter, graphic artist, writer, and amateur musician, and others. Famous architect Otto Wagner joined the team a bit later but was a very notable member. As you can tell, it was a place for all kinds of artists, they were all united to do what they love in a way that they thought was perfect. 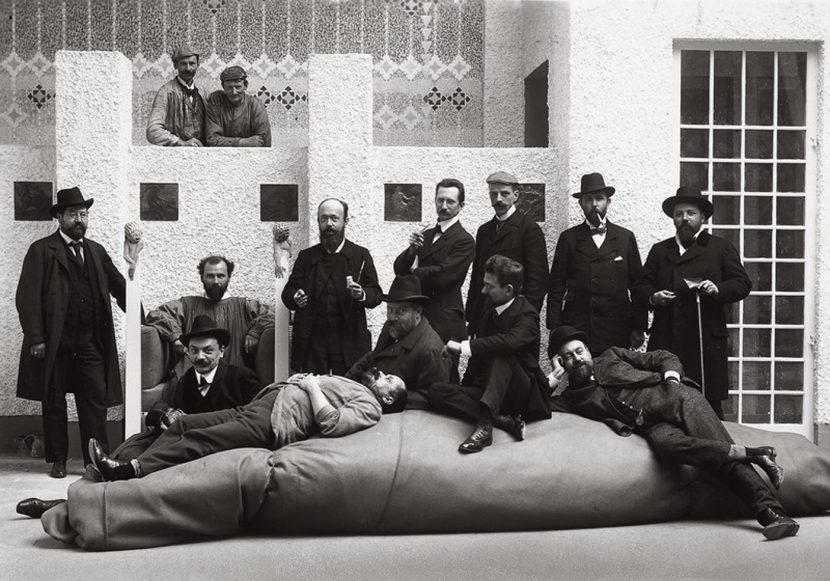 If you’d like to learn more about Vienna Secession, check out our previous blog post: “The Gold-Topped Jewel of Art Noveau – Secession Vienna”. Also, visit our Cultural Places platform and find the tour through this amazing place in Vienna.

As we are all explorers in our hearts, we were most interested in the astonishing architecture of the Art Nouveau movement that we get to see wandering the streets of beautiful European cities. It is quite easy to recognize buildings made in this style — they all have at least some details that resemble natural forms. You’ll see the amazing metalworks on their balconies, floral details on their façades, golden ornaments, and other lovely details.

Now we will mention some of our favorite examples of Art Nouveau buildings that we saw wandering around Europe.

We loooove architecture in Vienna in general, but Art Nouveau, or how was called here Viennese Secession, is really something special.

Naturally, we have to mention the very building where it all began, called just like the movement itself — Viennese Secession, which is located near the Karlsplatz. We already told you a bit about how it all began, so here we just want to note that this jewel of Art Nouveau in Vienna was designed by one of the founders of the Secession movement — Joseph Maria Olbrich. What makes this building so unique are its gold details, and especially the cupola on its top, which is the reason why the building is known as Krauthappl (cabbage head) among the locals. 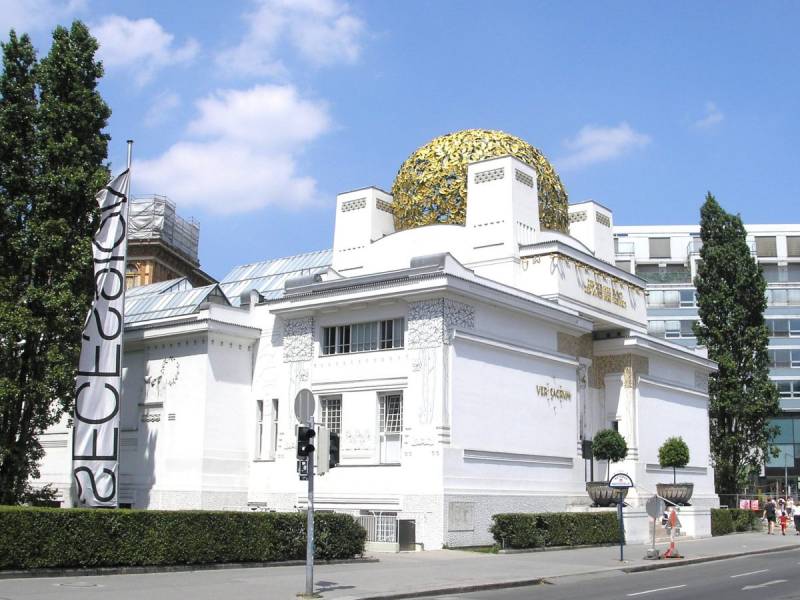 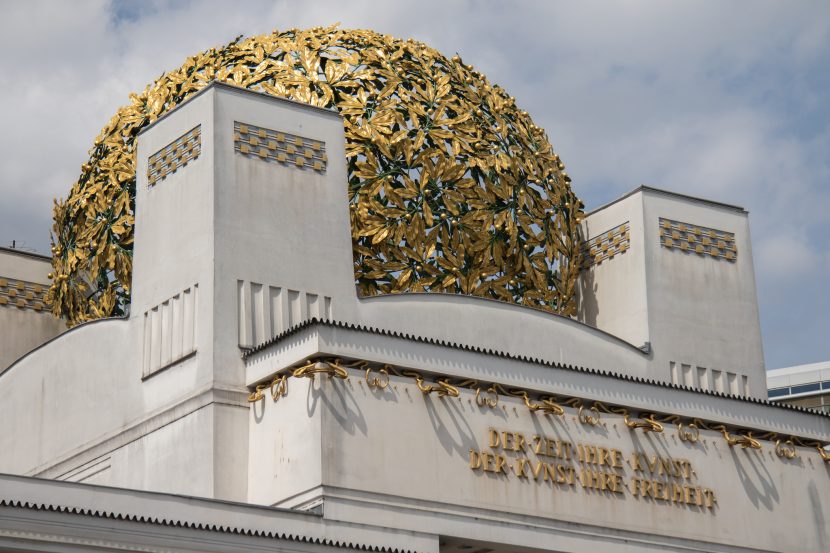 Another notable Viennese architect that belonged to this movement was Otto Wagner — he left such pretty buildings behind him. Just take a look at the Majolikahaus, one of the three Linke Wienzeile Buildings, located on the Naschmarkt. When you see this building it will be clear to you why is it so unique — it’s gray façade is covered in floral pattern; you will see pink flowers, green leaves, and golden wines. Also, you will notice the amazing metalwork on the stairway and the elevator cage of this building. Right next to it you’ll see the Medallionhaus with gorgeous golden details on its façade, and seven sculpted heads on its roof.

Otto Wagner is also known for the work he did on the Karlsplatz, or to be more precise, on the Stadtbahn — the old Ubahn station. Just take a look at that gorgeous entrance pavilion to the Ubahn, with the most beautiful golden and marble ornaments, that is now serving as an exhibition space and a café. 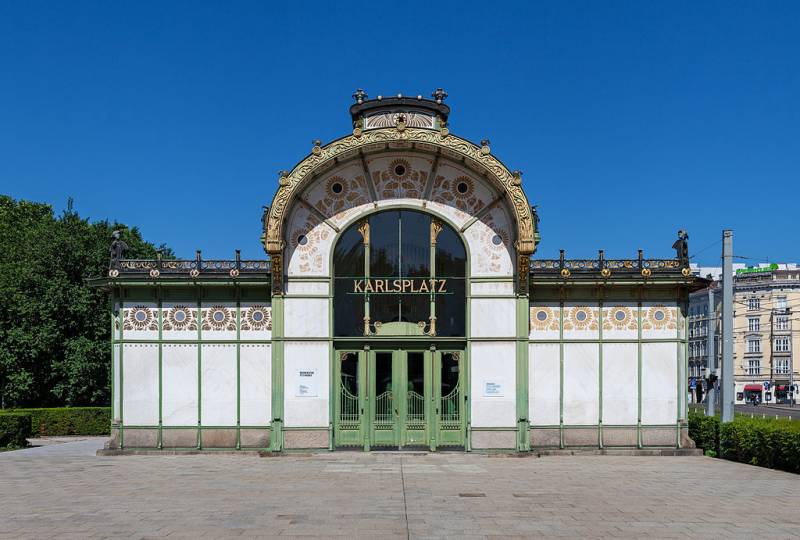 Paris is another city with astonishing architecture, and there are a lot of examples of the Art Nouveau architecture in the City of Lights. Some of the best examples you can find in its districts Paris 7, Paris 8 and Paris 16. One of the most notable examples of Art Nouveau in Paris is the Lavirotte Building (French: l’Immeuble Lavirotte) in Paris 7, designed by architect Jules Lavirotte. This building with an astonishing main façade and extraordinary sculpting is today classified as a Historic Monument of France. 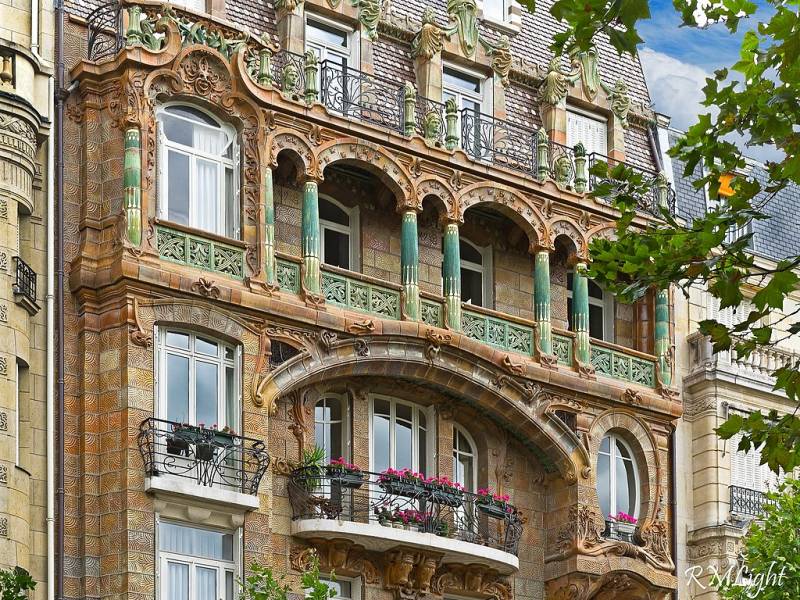 Art Nouveau in Budapest, or Szecesszió in Hungarian, and in Hungary in general, was specific because it was mostly inspired by Hungarian and Transylvanian folklore and motifs. It was a very popular style in Budapest, so there are many buildings designed in this specific manner, such as the Geological Institute, the Museum of Applied Arts, and The Postal Savings Bank building, all designed by Ödön Lechner, who was the pioneer and prophet of the Szecesszió. 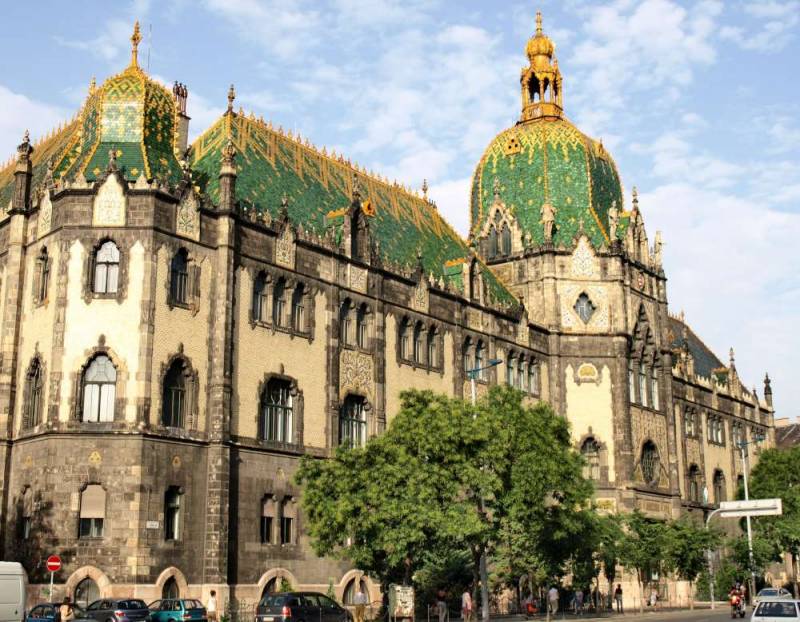 The Museum of Applied Arts in Budapest,
(cc) Misibacsi from the Hungarian Wikipedia / CC BY-SA 3.0

The most notable Art Nouveau building in Budapest is surely the Gellert Baths, which is the part of the famous Hotel Gellért in Buda, designed and constructed by architects Armin Hegedűs, Arthur Sebestyén, and Isidor Sterk. 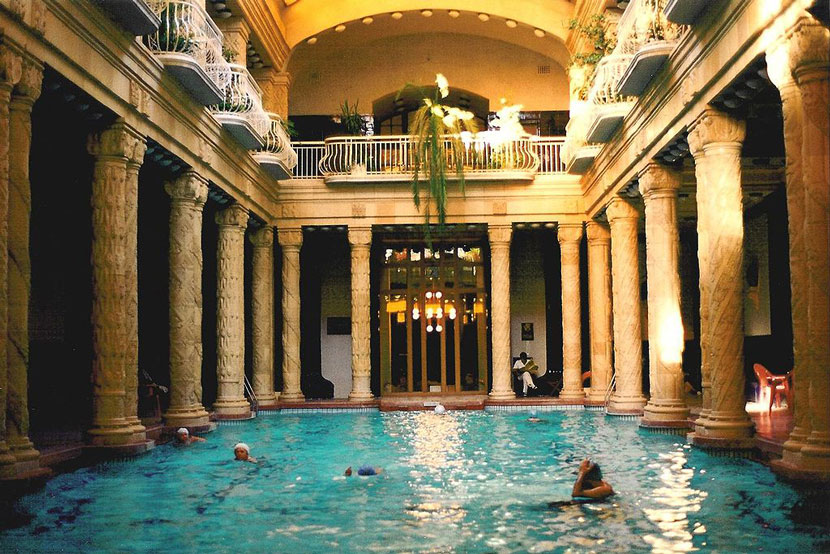 If you’re interested to read more about amazing landmarks of Budapest, check out our previous blog post: “Top 10 Things to Do in Budapest — The Paris of the East”

You may never think of the northernmost Serbian city of Subotica (Hungarian: Szabadka), set on the border with Hungary, but it is a real gem of Art Nouveau architecture in Central Europe. This lovely city dates back to the 6th century, but it developed the most during the Austria-Hungarian rule when it became a really important center. That’s when all of those gorgeous Art Nouveau buildings were made. We’d like to mention the synagogue designed by Marcell Komor and Dezső Jakab, which is known to be the most beautiful synagogue in Europe. 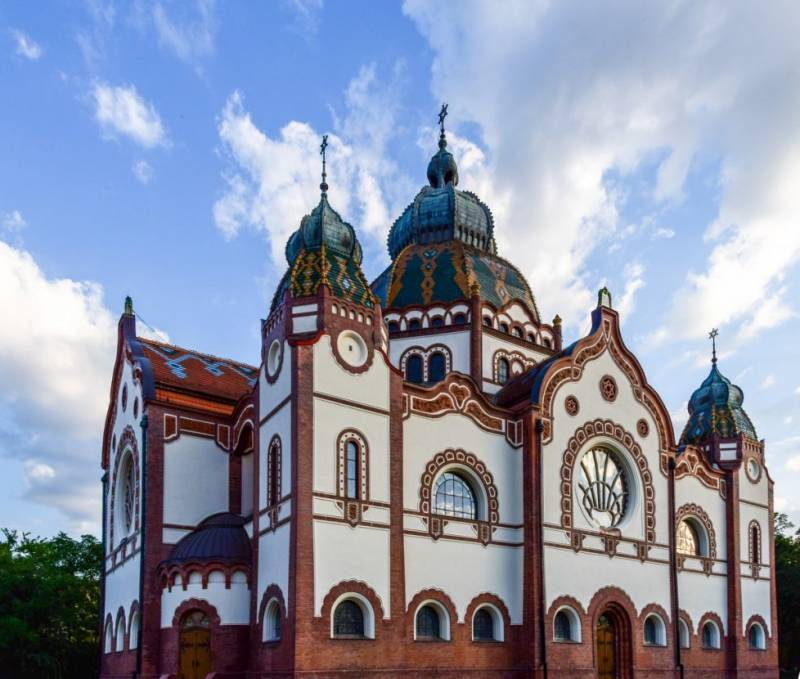 Our personal favorite, among Art Nouveau buildings in Subotica, is definitely the Raichle Palace — home of an architect who built some of the most beautiful buildings in Subotica, Ferenc Raichle. He gave his heart and soul into this building and you can that the first moment you look at this stunning building. 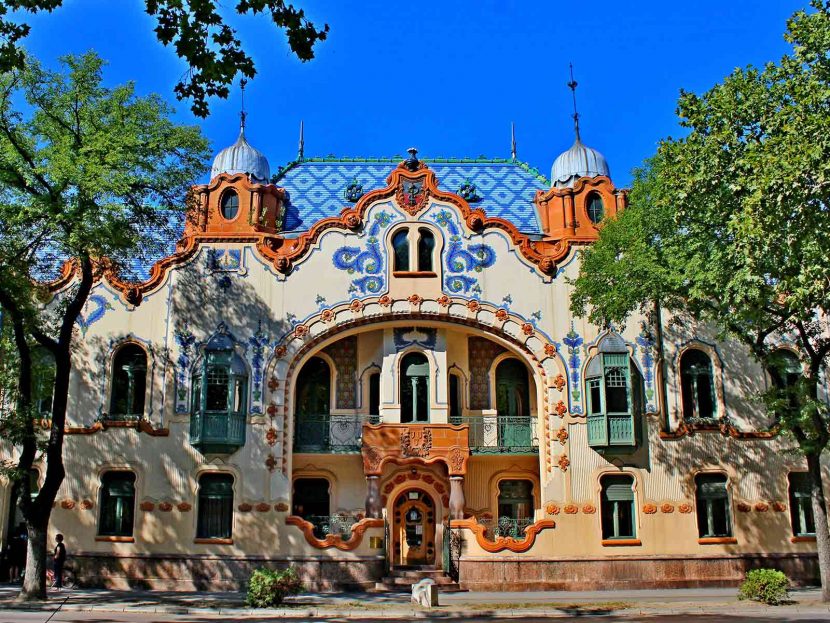 If you want to read more about this wonderful city in the north of Serbia, check out our blog post: “Things to Do in Subotica: Subotica City Tour”. Also, visit our Cultural Places platform to find the tour among the streets of Subotica, which will teach you more about Art Nouveau architecture in this gorgeous city.

Art Nouveau in Barcelona was quite specific, and it was known as Modernisme in Catalan. The most notable architect of that time was surely Antoni Gaudí. Gaudí’s work is the one with the most notable presence of natural forms and the most unique buildings for sure. Take a look at Parc Güell — a complex with extraordinary architectonic elements that are following the shape of nature. 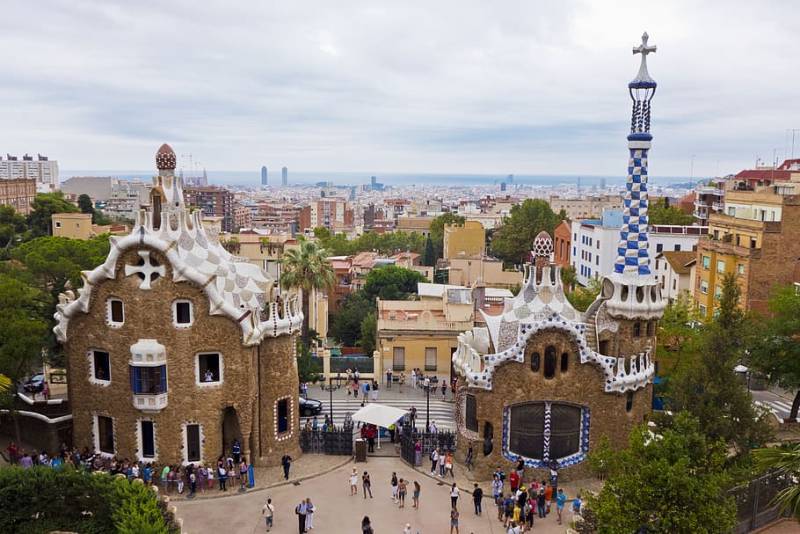 Gaudí designed many buildings around the city of Barcelona, and you’d be able to recognize then without anyone showing you which ones those are. There is Casa Batlló that is a very recognizable piece of Gaudi’s work. It’s outside resembles the skeleton and also there are beautiful parts that are made of broken tiles (similar to mosaics). 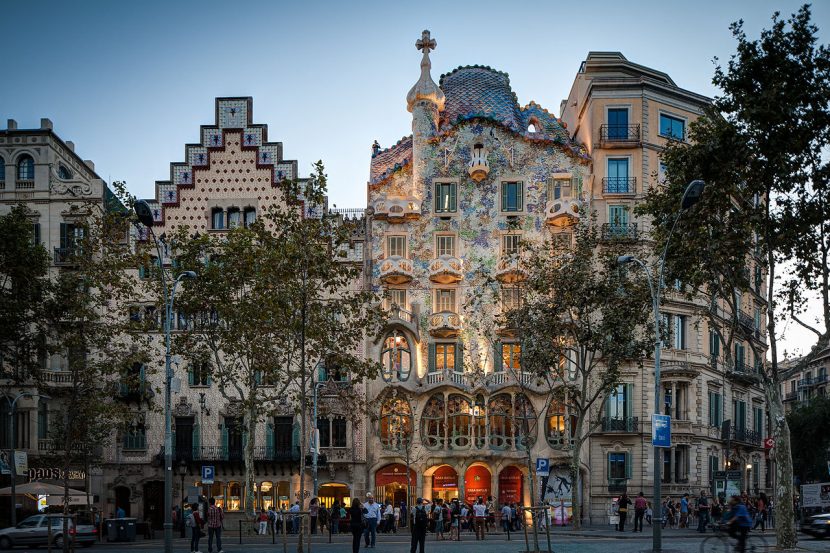 In the same neighborhood, there is the Casa Milà that Gaudí built of Milà family. It also lacks any straight lines and it’s made of natural stone. Only the roof is covered in broken white tiles – it’s a technique that Gaudí used a lot. 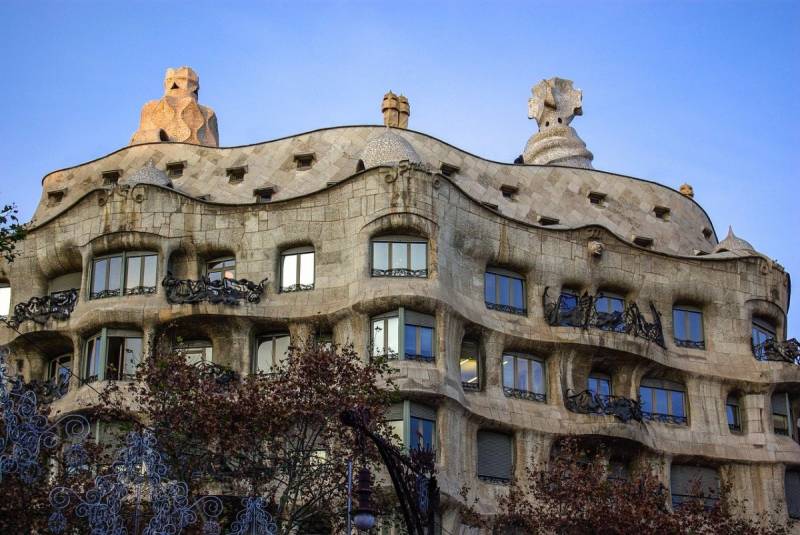 One of the latest and most notable Gaudí’s structures is definitely Sagrada Família, where he combined Art Nouveau elements with revivalist Neo-Gothic. This Cathedral is not finished yet, but we still consider it Gaudí’s masterpiece.

As you can see, Art Nouveau was an interesting movement, that had its variations in different countries. But one thing was common for every piece of art — natural lines and forms. We listed some of our favorite architectural masterpieces from this time, but there is so much more to see all around Europe, and even in the USA. We recommend you to make a list of the landmarks that you’d like to see the most, and when the time of isolation is over, when you start traveling again, wander through the streets around those buildings and try to spot more Art Nouveau masterpieces. Of course, let us know which ones were your favorites and send us a lot of pictures. 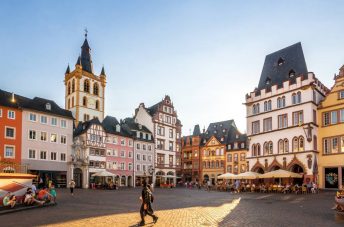 5 Best Cities to Visit in Germany off the Beaten Tracks 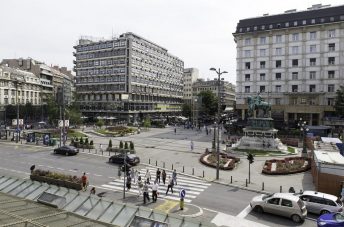